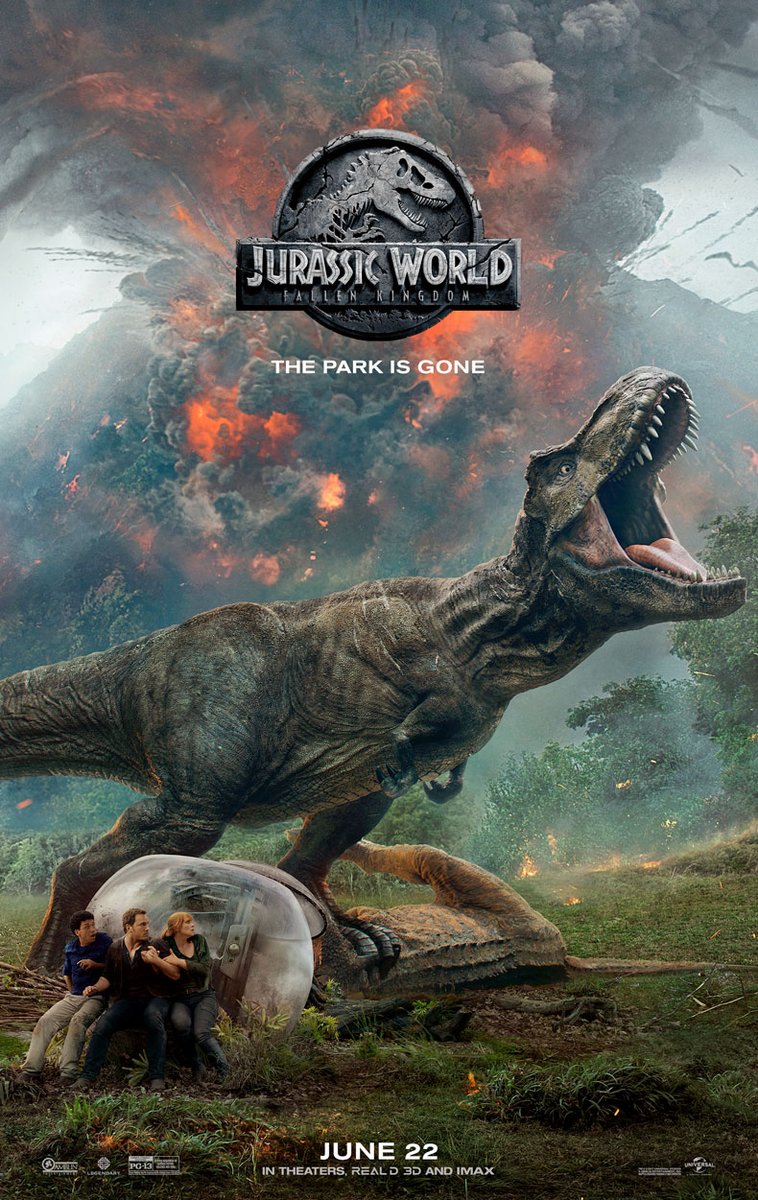 
Rating:
The sequel to the fifth highest grossing movie of all time is here, Jurassic World: Fallen Kingdom and it’s back with more dinos… wait, maybe not. More thrills… hmmm… sorta? More ruthless dino-makers and dino-buyers? CHECK It’s got that! The gang (and by that I mean Pratt and Howard) is back and this time they’re here to save the dinosaurs!

The story picks up a few years after the latest disaster at Jurassic World. Claire Dearing has moved on to the world of animal conservation, running the Dinosaur Protection Group. Why do the dinos need protecting you might be asking? Well, a volcano is about to erupt on Isla Nublar and wipe out all the remaining creatures running amok. And wouldn’t you know it a mysterious rich benefactor wants to save them too! So Claire scoops up Owen Grady, out building a cabin in the woods (as you do) and they head out to Isla Nublar. They quickly realize things aren’t the way they seem (go figure) and, as Jurassic movies are wont to do, the situation gets hairy.

Here’s the thing about Jurassic World: Fallen Kingdom: this movie attempts to wipe out the Park/Dino Island aspect of the stories, fully moving into the ‘world’ of Jurassic World, and yet relies so heavily on all that came before it to make it work. That mysterious benefactor? Actually, a former billionaire science partner of John Hammonds who split before the first movie, no big deal. His assistant wants to bring the dinosaurs back to the mainland in an evil plot that sounds like The Lost World. The T-Rex gets to do its whole surprise triumphant salvation attack on other dinosaurs/bad guys a number of times, trying to capture the moments of majesty in the original film. Fallen Kingdom repeats the beat of a scientist seeing a dinosaur for the first time in awe, using the same dinosaur no less!

But all these moments copy/pasted from the original lack all the heart, all the gravitas of their first appearance. Seeing the brontosaurus in Jurassic Park was magnificent for the characters in the film but also the audience. Fallen Kingdom attempts to put the audience in that moment again, except this time around we’ve already seen a T-Rex attack a helicopter, the Mosasaur attack a minisub, etc in this same movie. It’s old hat for us.

The movie goes off to try and show a new smarter dinosaur because we haven’t seen this enough times already, and finally criminals get to try and buy them for stuff just like Jurassic World always wanted. Seeing Chris Pratt action hero it up, punching out goons while a dinosaur is in the background sitting in a cage reminds us just how far we have departed the scientist heroes of the original, who are just trying to escape, to survive. The dinosaurs aren’t the stars anymore, and if that’s the case, what the hell are we doing in these movies?

Jurassic World: Fallen Kingdom is a B Movie with a blockbuster budget. At times that feels like it could be pretty damn cool, unfortunately, Fallen Kingdom doesn’t live up to its predecessors or its potential.