Sicario: Day of the Soldado Review

The 2015 hit returns for Sicario: Day of Soldado with fewer rules and more action. But does the sequel match up to the original? 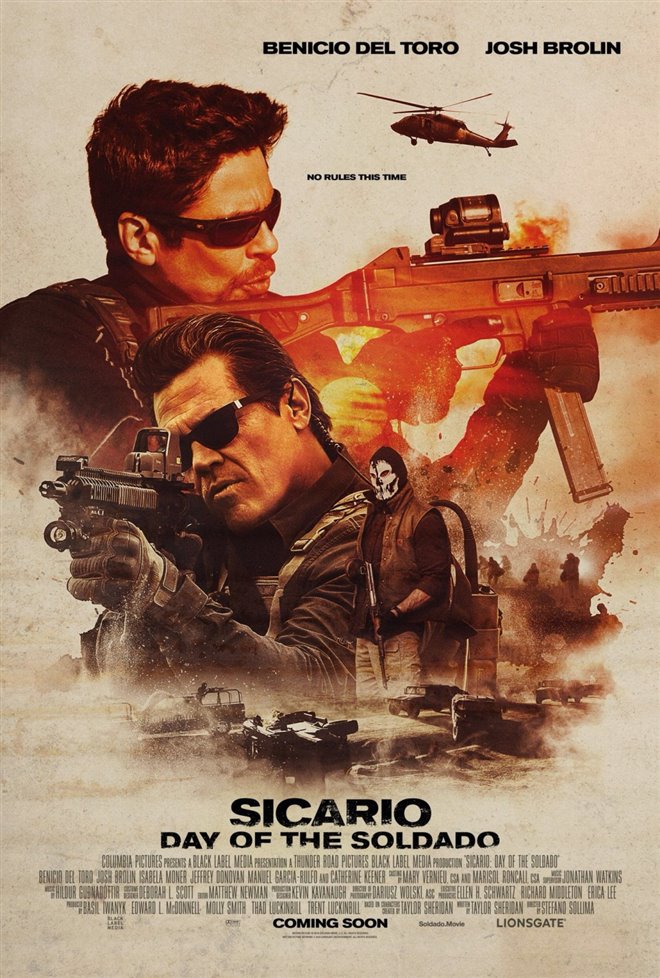 Rating:
No rules this time. That’s the tagline for this follow-up to Denis Villeneuve and Taylor Sheridan’s 2015 original, Sicario. You may be thinking, wait what rules were there the first time? Well, more than this one, that’s for sure.

The movie opens up with two scenes that are charged in this current era, a scene of migrants attempting to cross into Mexico and being caught by border patrol. Another, further north in Kansas City sees a suicide bombing inside a grocery store. While it’s not necessarily a graphic scene, it certainly feels personal. These two events light the fuse for the American government to set their sights on a war with Mexico. They get their agent Matt Graver and his team carte blanche to do whatever is necessary to incite a war between Mexican drug cartels.

And so, we spend our time following the ‘good/bad guys’ from the original Sicario as they engineer a plot to stir unrest and war up. Meanwhile, in the B-plot, a young Mexican American begins working with his cousin as a coyote, guiding migrants across the border. Of course, these two plots will collide together and the fallout will shake up the final act of the movie.

Here’s what’s good. Josh Brolin and Benicio del Toro are great. No two ways about it. Seeing them interact as these deeply flawed, but capable and skilled men in a miasmic world of orders and support is what gives this movie its central heart. Where Sicario left the audience reeling, with del Toro delivering the final lines to cement home the state of the world. “You should move to a small town, somewhere the rule of law still exists. You will not survive here. You are not a wolf, and this is a land of wolves now.” Alejandro delivers to the shaken Emily Blunt. Now, in Soldado, we follow those wolves.

The problem with that is this. Those characters, Matt Graver and Alejandro Gillick, are mysterious government guys. They’re in the shit deep, but as the audience follows Blunt as our point of view character we also have to keep them at arms lengths, so as to be separate from their cynical worldview. In the sequel, they become our point of view characters and so we have to inhabit their world with them.

That takes away the scathing power of their actions. Instead of looking on in disgust as these men fabricate a kidnapping and seek to bring a war to our neighbors, we are a part of it. Our main characters are doing things that really make them villains. In this movie, there are no heroes but the marketing and filmmaking want us to think that Brolin and del Toro’s characters are cool and in the right. Whether or not they come around to a more understanding and just view by the end of the runtime is up for debate.

The movie is, despite its faults still entertaining, though the final scene is a rough one that leaves a lot to be desired. Sicario: Day of the Soldado is a worthy successor to the original, even if it isn’t quite as tense, thrilling, or poignant.