“The Hunger Games: Mockingjay – Part 1” Kicks Off the Finale 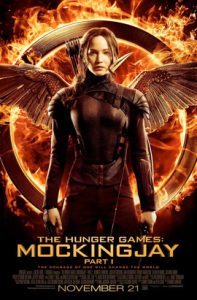 From District 12, to the Capitol, to the games, it seems like we’ve been everywhere in Panem until now. Mockingjay – Part 1 brings us to the rarely mentioned, yet intrinsically present District 13.

The penultimate chapter to the massive series of The Hunger Games doesn’t feel like merely a step towards a finale but stands on its own as a film with solid performances, themes, and world building. Mockingjay delivers more great storytelling while at the same time delving deeper into a story that could easily become very superficially complex.

I won’t be discussing too much of the plot to prevent spoilers, but let’s talk about what we know. From the end of Catching Fire, we know that Katniss, Plutarch, Haymitch, and Finnick have escaped the arena and Katniss awakens to find herself on the way to District 13.

During the film, she is largely self-ostracized. Keeping a distance from forming connections, all the while focused on getting back Peeta. This is a different Katniss than we’ve seen in the previous films. The loss of Peeta has broken her in many ways, and despite D13’s need for her as a propaganda tool for the rebellion, she is unable to reconcile the guilt she feels for being saved over Peeta.

Jennifer Lawrence brings a depth of character to Katniss; once more showing me that she is capable of inciting empathy for a character that I once considered very cold and distant.

The change of setting, from the previous game arenas, affects the story and the characters as well. Without the survivalist mentality of the arena, the story is forced to not only slow down, but rely on the slow burn that will bring them to the climax set in the second part of finale. District 13 is in stark contrast to the Capitol, and evolves the story towards our original end goal.

The games were always good at reminding us that the Capitol was our enemy, but sometimes we got confused, there was Cato and the poison fog and the murderous baboons, and the Careers, and the peacekeepers. They distracted us from the real problem that revolved around the societal issues that entrenched Panem. There is no hiding from that in Mockingjay – Part 1. It’s a different tone, and lovers of the action that we saw in The Hunger Games and Catching Fire might need time to adjust to the lack of action we had before.

Instead of Katniss’ defiance, we see the defiance of a nation that has continuously been oppressed and used by the Capitol. Katniss is the spark, they are the flame. The film does a good job of showing us the cause and effects of District 13’s propaganda, pitting the already rebellious districts against the capitol directly.

This film is a very visual and aesthetic experience. We get to see parts of Panem we’ve never seen before. Combining the music of James Newton Howard with the most emotional scenes of the rebellion does a perfect job of showing the viewer the impact Katniss has on the people as their Mockingjay.

Performance-wise, the entire cast does a wonderful job. Julianne Moore is enigmatic as Alma Coin, playing a great foil off of Donald Sutherland’s menacing President Snow. The late Philip Seymour Hoffman deserves praise as the subtle Plutarch Heavensbee, the propaganda creator of the rebellion. Additional applause for Willow Shields as Katniss’s sister Prim, Sam Claflin as fellow victor-turned-rebel Finnick, Elizabeth Banks as Effie Trinket, Liam Hemsworth as Gale Hawthorne, and Natalie Dormer as the badass Cressida. I think this is the first time in the series that the supporting cast has gotten to shine as much as the main cast.

Of course, I must also mention Josh Hutcherson as Peeta Mellark, who not only brings motivation for an emotionally wrecked Katniss but also serves his own role as the face of the Capitol, an antithesis to Katniss’ Mockingjay. His story moves the slowest throughout the film and yet culminates in the most impactful conclusion.

Personally, I think this may have been the best film of the series. I went in with very low expectations, having heard mild to bad things about the final book of the series (note: I have not read the series). But it captured me entirely, and was able to leave a stronger mark than its predecessors.

Final Thoughts: The Hunger Games: Mockingjay – Part 1 may lack some of the heavy action of its previous counterparts, but brings with it an inevitable and emotional evolution into a more mature story. Kudos to the wonderful soundtrack and excellent direction. A definite must see for fans of the series.