Marvel’s The Defenders: Not Quite What We Were Expecting, But That’s Okay… We Think 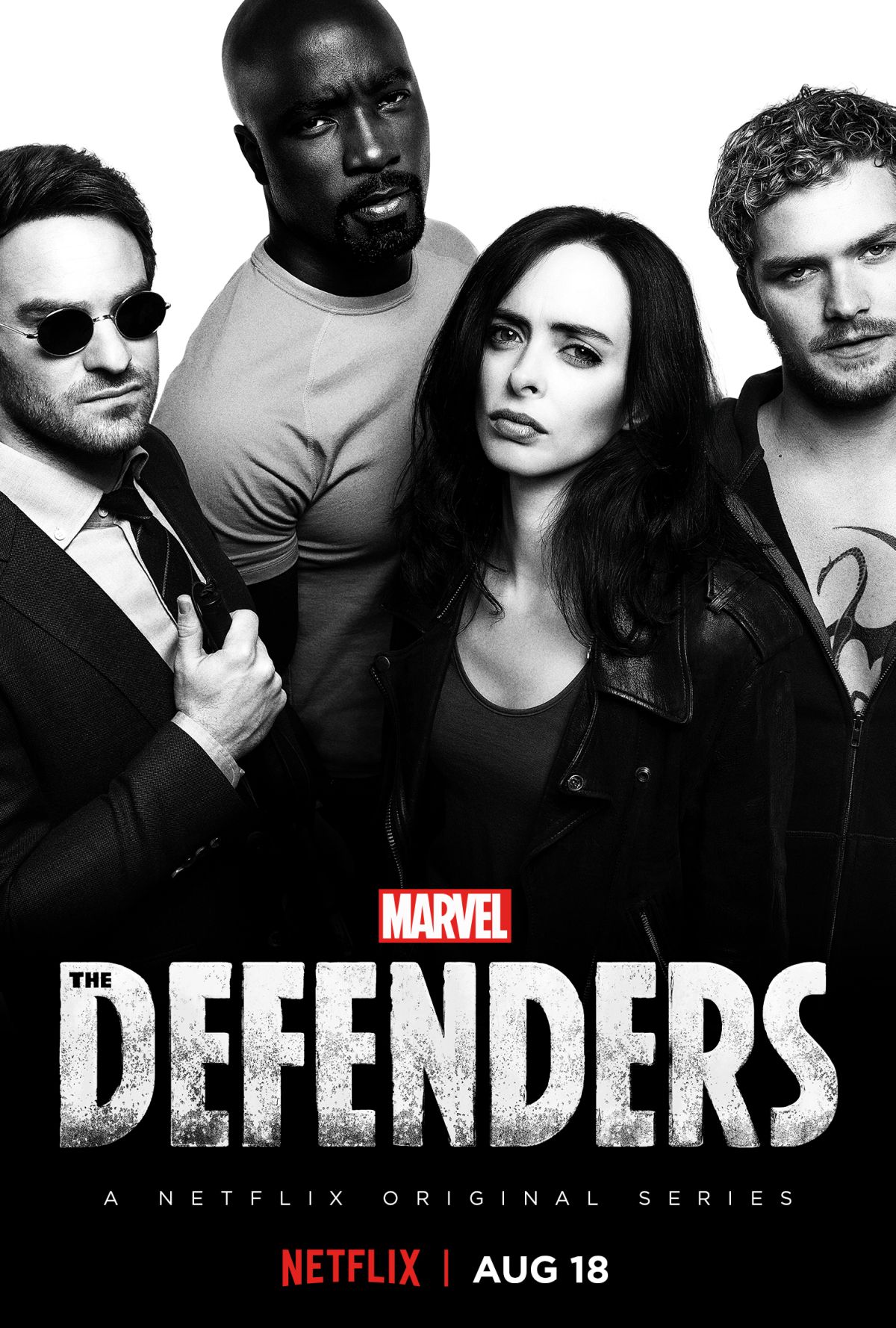 
Rating:
Synopsis: Four heroes work individually with a common goal – to save New York City. As a new conspiracy takes shape, Matt Murdock (Daredevil), finds old habits are hard to break, Jessica Jones gets in over her head, Luke Cage tracks a lead, and Danny Rand (Iron Fist) meets his match. Burdened with their own personal challenges they realize they likely won’t be able to accomplish their goals working solo and team up to form The Defenders, a supergroup equipped to save the Big Apple.

We’ve all been patiently waiting for Netflix to release Marvel’s The Defenders. If you’re an eager fan like me, you probably totally already binged the show this past weekend. Then went off and celebrated the Solar Eclipse like a boss! No, but seriously, it’s the middle of the week and if you haven’t watched The Defenders yet, you probably shouldn’t continue reading this. If you have already seen it, let’s dig in to some of my thoughts!

First, please understand that I was not a fan of Daredevil comics. I actually didn’t really care for the character too much in general. I’ll admit my interest peaked back in early 2015 after watching Marvel’s Daredevil on Netflix. It was hands down the BEST Daredevil adaptation I had ever seen! Aside from the comics (which I didn’t read), I only had the 2003 Daredevil movie starring Ben Affleck to go off of. Not much, I know, and for the record, I thought it was a pretty bad movie. But hey, you take what you can get, right?

Netflix followed up with Marvel’s Jessica Jones (a kickass female character) later that year and I was hooked. I eagerly awaited for Marvel’s Luke Cage (September 2016) which, I also liked, but didn’t love (just being honest!). Then finally, Marvel’s Iron Fist (March 2017); which turned out to be one of the worse Marvel series on Netflix.

The Iron Fist comics are way better, and it’s so sad to see the character suck on screen, sigh. Like, seriously, if you’ve been dragging your feet on watching Iron Fist, you can save yourself some of the agony and read this article instead that features episodes you really need to watch and which ones you can skip.

I did like The Defenders, but well, it’s not quite what I was expecting, but that’s okay… I think.

Overall the series was good, it was solid. If I had to rank it among the Marvel shows, I’d say it was definitely better than Iron Fist but not as good Daredevil. Does that make sense? Realistically, we all knew it would be a challenge to connect all of the characters even though they come from the same universe. Especially considering the only two characters familiar with each other are Jessica Jones and Luke Cage.

Before even watching the series I noticed immediately that there were only 8 episodes. I couldn’t believe it. It wouldn’t have disappointed me as much if the episodes were at least longer than an hour. But that wasn’t the case.

All of the other Marvel series had 13 episodes that ranged from 45 minutes to over an hour. I wonder what was behind the decision to make The Defenders only consist of 8 episodes. The nice thing about this though, is that shorter episodes make for an easy binge session over the weekend.

Let’s be real though, if you’re like me, you likely binged eight hours straight in one sitting. Then rewatched episodes you really liked and looked for things you might’ve missed… or that could just be me.

The series kicks off picking up from where each of the heroes left off in their individual shows. Danny and Colleen are chasing down leads to stop The Hand. Luke Cage is released from prison (thanks to Claire reaching out to Foggy) and tries to get back into the swing of things.

This works because we begin to see how these characters will be connected. Jessica is in a bar still drinking heavily to cope with her life. Meanwhile, Matt is trying to lay off moonlighting as the Daredevil and finds himself taking on pro bono cases to keep busy.

Danny and Colleen are in Cambodia as Danny fights a mysterious woman and fails to protect a man who was the closest thing to a lead. Before the man dies, he tells Danny that he needs to go home. New York City is where the fight is. Of course Danny throws a tantrum.

Gotta say, I was not expecting Defenders to start with Danny’s character arc, but I guess it makes sense. Have to connect the characters somehow, right? And forcing Danny to come back to New York was essential to the story.

Meanwhile, Luke has a promise to keep and follows a trail that leads him directly to The Hand. Jessica takes on an unwanted case when a women begs her to find her husband and a mysterious caller tells her not to take the case. Of course Jessica loves a challenge. She pursues the case, entangling herself in The Hand’s web. Matt, on the other hand, tries to stay out of trouble but takes on the task of keeping Jessica Jones out of trouble. He’s trying to protect but ends up putting himself right in the middle of a war.

The opening credits begin shortly after Danny’s scene. I happen to think the opening is one of the best parts of the show! Each character is displayed over the city with a different color, red for Daredevil, blue for Jessica Jones, green for the Iron Fist, and yellow for Luke Cage. This is also one of the things that remains consistent for all the Netflix Marvel shows: pretty cool opening credits.

The writers did a good job in episodes 1-4 setting up the storyline and building the connections between characters. It’s a slow beginning, but it didn’t bother me because the build up was believable.

It was also nice to see side characters like Foggy, Karen, Misty, Trish, Claire, and Colleen help push the narrative along. Each episode ended and flowed right into the next, it was like watching an 8 hour extended movie.

Sigourney Weaver plays Alexandra Reid; the leader of The Hand. I didn’t think there would be another woman stronger than Madame Gao. Alex is nothing like Gao, and demands a different type of respect. Her character is interesting because she doesn’t seem evil at all. In fact you feel sorry for her early on, when she’s diagnosed to die at any given moment.

Alex becomes more of a mother figure, if anything, when she resurrects Elektra, who is known to The Hand as Black Sky. Since Alex doesn’t have much time to live she’s made it clear that her motivation is to capture the Iron Fist. The common goal The Hand shares is to retrieve a substance that will keep them alive from K’un Lun. It’s the same substance that Alex used to bring back Elektra, which drives the motivation of the Black Sky to succeed if she wants to live.

In episode 3 we learn about Elektra’s resurrection. The pieces to the puzzle officially connect for all the characters as the strangers end up at Alex’s corporation. Danny is fighting for his life when Luke walks into the line of fire. Matt tries to stop Jessica in the lobby, but overhears the fighting and takes her scarf and the two set off toward trouble.

Jessica and Luke recognize each other and fight to protect themselves. While Matt takes on fighting Elektra unbeknownst to him. Right before she delivers another blow, he calls out her name. Even though she is known as the Black Sky and a weapon for The Hand, she hesitates. Danny walks in and blasts her straight in the chest with the iron fist, which turns out to be a pretty cool scene. The Defenders all get on the elevator and try to figure out what just happened.

In episode 4, the Defenders get to know each other over dinner. The best part of the show is how each of the characters make fun of Danny Rand. They all seem to take him as a joke, pretty much how everyone who has seen Iron Fistfeels. Stick shows up and tries to convince them all that they are they only ones who can save New York City. But none of them are buying what he’s selling.

Matt tries to keep his identity a secret but it doesn’t work out. Jessica is the first one to leave to check on her client, while the rest of the Defenders are greeted unexpectedly by Alex. She tries to convince them that they’re on the wrong side, but of course it doesn’t work.

The rest of The Hand arrives and a fight breaks out. Matt chases after Elektra and tries to plead with her while the others fight. Murakami, who is one of the leaders of The Hand witnesses Elektra protect Matt. In the following episode, Murakami questions Alex’s leadership and the power of the Black Sky. Elektra goes out on her own journey to discover who she was in the past.

Luke meets his match with Sowande, but managed to capture him. The team interrogates him and tries to figure out what The Hand’s plans are. Sowande doesn’t give up anything, but he does mention all of the people that the Defenders care about: Trish, Claire, Foggy, Malcolm, and Karen.

So they set out across the city to round up their loved ones to keep them safe. This is another cool moment because all of the side characters become connected. It’s almost like a hero friend support group.

This is also a part of the series where Misty from Luke Cagebecomes seriously annoying. She tries to get the Defenders to tell her what’s going on, but they agree to keep her in the dark. When she probes again, Luke just spills the truth.

In episodes 6 – 8, the Defenders begin to have their own thoughts on what is the right way to handle The Hand. As they discover that the Hand wants Danny to open a door, they team up and take precautions to keep him from The Hand. Stick turns on the group and tries to kill Danny, but ironically, Elektra ends up killing him first.

Alex learns that it’s not easy being the leader and finds her death at the hand of her beloved Black Sky. Elektra takes charge and forces Danny to open the door. In the last episode, The Defenders make a fighting effort to save the city. In the end they do, but not without loses. Misty loses an arm, and Matt fights to the end with Elektra until the building comes crashing down.

Everyone thinks the Daredevil is dead, but we know it’s not true because Netflix announced the next season already, ha! But seriously, Matt is seen in bed with bandages with a nun. But does that mean Elektra is alive too?

Overall, The Defenders was good, but it could’ve been better. The first four episodes were all about connecting the heroes together. The last four episodes went straight into the fight against The Hand. I wonder what the writers could’ve accomplished with two to five more episodes.

It just seems like so much potential was wasted. The fighting scenes were alright, nothing spectacular. The death of Stick seemed unnecessary. Though the death of Alex was unexpected, it seemed too soon. There are still mysteries as to whether Gao, and the others made it out of the rubble as well.

There are several unanswered questions that should be answered in the coming seasons for each individual series. We do know that Luke and Jessica alluded to meeting up again. But I guess we’ll just have to wait and see. What are your thoughts on The Defenders?