Wish Upon Should Have Stayed As Wishful Thinking 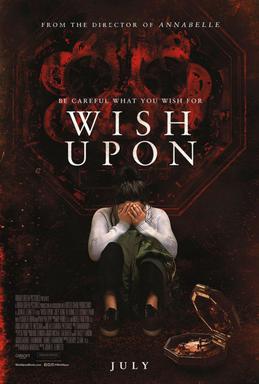 Wish Upon is trash. Seriously bad. It is not scary. The kills are lifeless, rejected deaths from Final Destination 6.66 at best. The acting is subpar. The story leaves much to be desired. It has no internal logic that keeps its stupidity in check. It grasps vainly at relevancy by including poorly handled stand-ins for apps like Instagram and PokemonGO. And a whole lot more I can complain about. Oh, it does have Jerry O’Connell in a completely uncredited role. Still interested?

Wish Upon tells the tale of unlikable high schooler Clare. She suffers the terrible fate of being one of the Uncool and her father doesn’t help her case. He, played surprisingly by Ryan Philippe, digs through trash with his friend and has a bit of a hoarding problem.

One day he brings home a fancy lookin’ box with Chinese writing on it. “Dag’gon!” he thinks! “Clare loves that Chinese stuff, she’s in that class ‘n’ errythin!” He whisks it home for her as a gift and she does indeed enjoy it. She clutches it to her chest after a particularly harrowing day at school and wishes, “Oh geeze, I sure just, oh gosh I just wish that girl would rot,” only she doesn’t know that this box has such evil powers and for a blood price can do just that! Cue an hour and a half of terrible wishes, terrible deaths, and no real lessons being learned.

Clare is an unlikable youth, she’s not very nice to anyone really and as it becomes obvious her wishes come at a hefty price (her first wish costs the life of her pet, and how she doesn’t immediately use the second wish to bring him back? That’s just further evidence she is the worst) she never is remorseful or tries to do anything about it really.

Every wish is for clear personal gain, such as popular girl being taken out of the picture, all of her just deceased (to pay the price on some other awfully dumb wish, I think for the popular guy to like her) uncle’s money to go to her, for her dad to not be so embarrassing – which, quick note, this movie asserts that a dad playing weird smooth jazz saxophone is somehow cool and Barb from Stranger Things wants some of that. Again, ridiculous.

So, I mentioned the logic problems? Well here’s the deal with that. Movies, and horror movies especially it seems, are fantastical and have logic problems. Sure. But usually they create the rules of their fantasy world and adhere to them. Not so with Wish Upon.

The timeline of when these blood prices must be paid seems to be the night after the wish is made, at least the first 3 or 4, until 50 minutes into the flick when it decides it should take days? weeks? for one to come to fruition. I say days and weeks with a question mark because this movie also seems to lack any control over the perception of time. Oh and those blood prices? You’d think it is paid by somebody close to you dying, and the trailers would have you believe that. But nah, it turns into whoever you just happened to be around recently I guess.

Anyways, after 7 wishes the box housing a demon comes to collect your soul, and despite this movie’s attempt to psyche you out, it happens and you don’t really care. About anything.

Oh, and a teenage boy says, “You dig on multiverse?” in this movie like twice, it’s terrible.

But hell, it cost $12 million to make and the end scene begs for a sequel (please stop) so I look forward to reviewing WIIsh Upon for you all in a year.

Don’t see this movie. It is in theaters somewhere, but don’t go there.