Kong Kenan Takes Up the Super-Man Mantle in ‘New Super-Man Vol. 1: Made in China’ 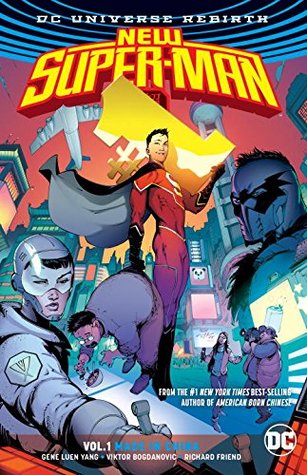 
Rating:
So far a lot of the Rebirth titles I’ve read have been pretty hit or miss, but I am happy to say that I really enjoyed the first volume of New Super-Man. I had been excited for this series ever since it was announced. I loved that DC was creating a new, Chinese superhero and Gene Luen Yang is such a phenomenal writer that I couldn’t wait to see what he did with the story.

While this volume, which includes the first six issues, presents a largely stereotypical origin story in many ways, New Super-Man is still a lot of fun and Kong Kenan is certainly a different kind of hero.

I mean, Kenan isn’t exactly the kind of person whose personality screams hero at first look. That’s one of the things I like about him. At the beginning of the series he’s basically just a powerless nobody. His defining characteristic is that he’s a selfish bully who takes out his frustrations on a rich classmate he’s terrorized for years. When that kid is nearly abducted by a costumed bad guy, something comes over Kenan and he ends up rescuing this kid.

Since he’s got no powers, this is kind of a big deal. And in true Kong Kenan fashion he makes the most of it. His first thought is to use his newfound fame to hit on a hot news reporter. When he’s approached by a government agency that offers to give him essentially the same powers as the American Superman, he jumps at the chance. And when the opportunity arises to take credit for the new Super-Man’s heroic deeds he doesn’t hesitate to out his own secret identity.

He’s pretty full of himself and it’s kind of great.

When he’s given his powers he finds himself forced to join the Justice League of China alongside Bat-Man and Wonder-Woman. The book isn’t shy about pointing out the ridiculousness of all these names and imitations – or taking jabs at the lack of an Aqua-Man. The other two, Baixi and Deilan, take it all way more seriously than Kenan probably ever will, but their relationship changes and grows as the book progresses. I also love their interactions and I really look forward to seeing the team come closer together.

Now, as I said before, this book provides a pretty stereotypical origin story to Kong Kenan as our New Super-Man. While the character has his own set of unique quirks, he’s still your basic teenage superhero. Even the major plot twists will feel familiar to anyone who has read a comic or two. Still, it’s a fun book and Kenan is a great character. I think he has a lot of potential moving forward and I suspect he’ll have a lot of opportunities for personal growth.

What I love most about the book is probably it’s unique setting and I hope that the book continues to base itself primarily in China. One of the biggest ‘plot holes’ so to speak in both DC and Marvel comics is their general lack of interest in setting their stories anywhere but the United States. Even when they do include characters from other countries they, too, are generally stuck in America – or in the case of Marvel Comics, usually just New York City. But China is the most populous country in the world. Imagine the potential for storytelling!

New Super-Man Vol. 1: Made in China is a great start to what I’m sure will be a really great series. While story-wise it’s not breaking the usual superhero mold, the character and setting offer a fresh look at a familiar story. Kong Kenan is a great character and Gene Luen Yang and artist Viktor Bogdanovic are doing a fantastic job bringing the character and his story to life. It’s definitely worth a read!