Deep State Vol 1: Darker Side of the Moon 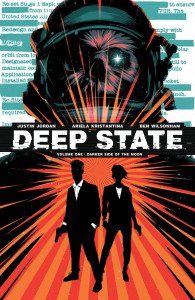 John Harrow doesn’t exist, and his job is to make sure that other things don’t exist, too. At any given time, the government is running dozens of black book operations, experiments that aren’t on any official record and are never acknowledged to exist. Most of the time, they go as expected and the public is never the wiser. John Harrow’s job is to handle them when they don’t, and do anything to make sure the government’s secrets stay just that—secret. Collects issues #1-4. Newly optioned by 20th Century Fox TV!

While not terribly original in concept – two agents from a shadowy ill-defined to the uninitiated agency take on things the conspiracy theorists were right about all along – it is a fun read. The artwork alone drew me in from the first time I laid eyes on the cover and continued to lend itself beautifully to the story being told.

A woman, Branch, is recruited by a peculiar man named John Harrow to an organization that “you’ve have never heard of” to help make sure that conspiracy theories stay theories. When she calls her boss to confirm Harrow’s identity, it’s revealed that he’ll be confirmed for just about any organization she can think to name if she needs that kind of confirmation. The important thing is that Harrow can give her all the answers and her inherent curiosity drives her to join up with him.

It does sound a little Men in Black and X-Files-y, but the comic is aware of that and makes cheeky nods to both franchises throughout the first story arc. From their introduction, the readers are thrown into the first conspiracy theory Deep State is going to tackle – the moon landing. The first official moon landing was actually the third and surprise! The Soviet Union actually made it to the moon first in 1964. The problem was that they never came back…

When something inevitably does crash land in present day Pennsylvania, it’s up to Branch and Harrow to assess and contain the situation. They deal with the local forces and showcase the bumps in their new partnership – trust issues, gray morality, questionable judgement calls!

As more and more of the sleepy townspeople are affected, the outcome looks more and more bleak for our duo, but they eventually band together to pull through. There are hints that Harrow may not be the man he claims to be – what’s this mysterious past he’s working with – and an interesting twist at the end that questions just who Branch might be as well.

The case is wrapped up a bit too neatly for my liking, with what feels like minimal sacrifices on the part of our leads and a convenient bit of character development, but there are a couple lines that I had to stop to appreciate and I really can’t say enough about the artwork. Check out Deep State Vol. 1 and embrace your inner conspiracy theorist today (you’re totally right about the moon landing by the way)! Issue #5 starts a new arc and theory to be tackled and I have high hopes for things to move in a more original way now that we’ve gotten the foundation laid.