‘Briggs Land: Lone Wolves #1’ Seeks to Preserve The Family At All Costs 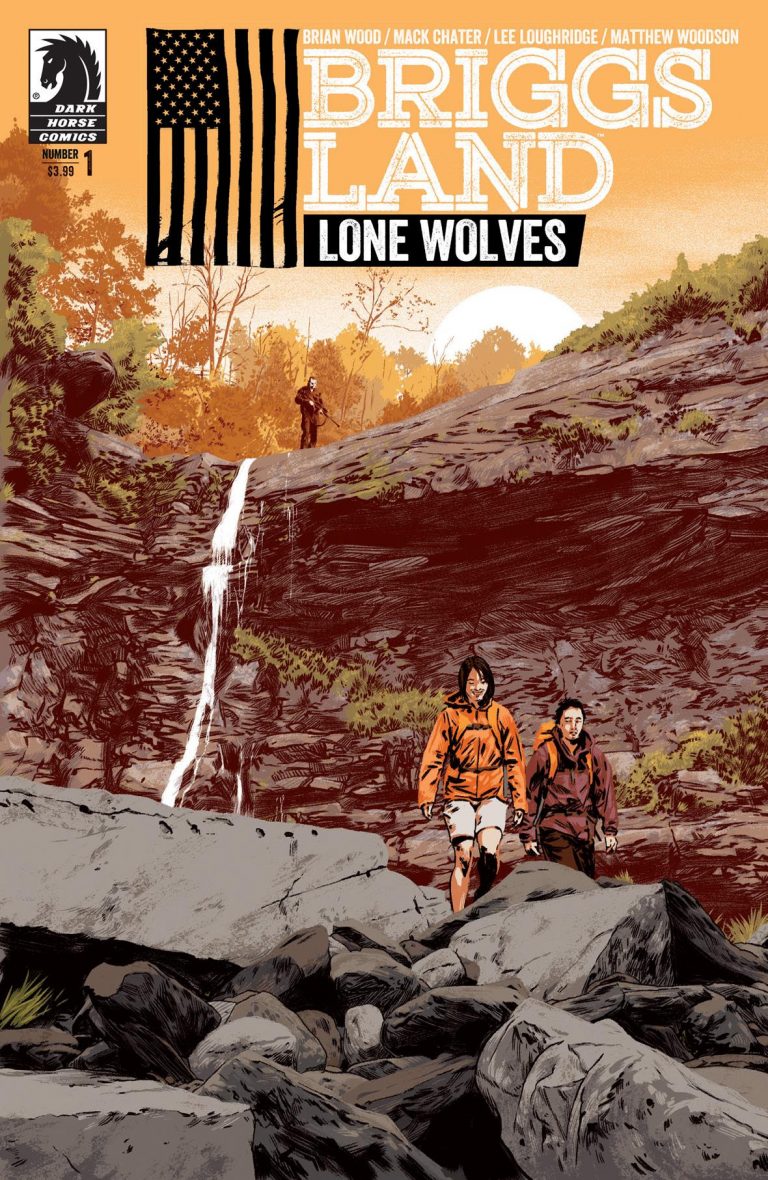 
Rating:
Briggs Land has never been an escapist, fantasy series for readers to get lost in. Rather, it’s an uncomfortably on-the-nose, just slightly-ahead-of-its-time, politically charged exploration of the shades of gray in morality and beliefs told through the lens of one family.

The original Briggs Land focused primarily on Grace, the matriarch of the family, wresting control of Briggs Land from her jailed husband and struggling to hold command as a woman. It included a heavy side-plot involving her eldest son Caleb, the bookkeeper of the family, neo-nazis, and his attempts to expand the family’s financial gains. Briggs Land: Lone Wolves brings Isaac, Grace’s youngest son recently returned from the military, into the forefront and doesn’t require any knowledge of the previous series to get up to speed on this one.

With news outlets gathering on the outskirts of Briggs Land, their lawyer, Sam Sinclair, is mounting a talking-head defense of Briggs Land and their rights given to them by the Constitution. Something has got the outside world up in arms, raising the hackles of a number of government agencies and focusing their attention on the Briggs.

Cut to four weeks earlier, when Isaac invites his nephew Jacob, Caleb’s oldest son, to explore some old trails leading to Canada through Briggs Land territory. A misunderstanding may be what leads to the future events when Isaac makes a calculated decision about the two backpackers that stumble upon them.

While Briggs Land was relatively small-scale and insular to the family and those related, Lone Wolves brings about the many eyes of the outside world. Brian Wood echoes the current political climate of talking heads by putting the Briggs Land lawyer on television and delivering his charged rhetoric to the masses. There is a reference to social media as a basis for news and accusations that would have been laughable five years ago, but is enough give pause these days.

Wood has always presented this series with a frankness that forces audiences to deeply explore their own beliefs. While I have to admit that the lawyer makes some salient points, I have never been able to root for the Briggs family (even after speaking to Wood himself about the family), but that’s not a reason to skip this series.

The beauty of Wood’s writing is that it allows for readers to experience the characters and the situations in a way that leaves the heroes and the villains open for interpretation. Whether Isaac’s actions in this issue were correct or not is left up to individual readers to decide, though there’s no doubt that upcoming issues will continue to color that opinion.

Juxtaposed against the writing is the art from Mack Chater and colorist Lee Loughridge. The crowded and chaotic opener further separates the outside world from Briggs Land, as Isaac’s trip through the woods is filled with several pages of peaceful, calm wilderness. Loughridge continues the muted coloring of the previous series, with the outsiders bringing a pop of color.

There is one particular page that I found momentarily humorous and then sobering (in that way, it’s like much of the news these days), when someone from Briggs Land waves an American flag while flipping off a helicopter full of g-men. That funny imagery quickly takes a turn as the panels cut back and forth between the two points of view. I won’t tell you what happens, but it’s safe to say that it’s a reminder that this is not meant to be a funny series once the implications are taken into consideration.

The art conveys movement in nature particularly well in this issue as Isaac and Jacob traverse the lesser-developed lands owned by the family. The world of Briggs Land is opened a tiny bit as they walk past solar panels and windmills, showcasing without fanfare how the family manages to live without relying on the government. And the lack of words on many of the pages is a great choice to convey the isolation of the family while also giving some gorgeous landscapes.

Briggs Land: Lone Wolves is an emotional investment in a politically-charged series that is challenging to read and asks much of the audience in the process. Residing in the morally gray areas, Brian Wood’s rewards readers with a deeply thought-provoking series that puts the beliefs of one family in the spotlight. I can’t recommend it enough.