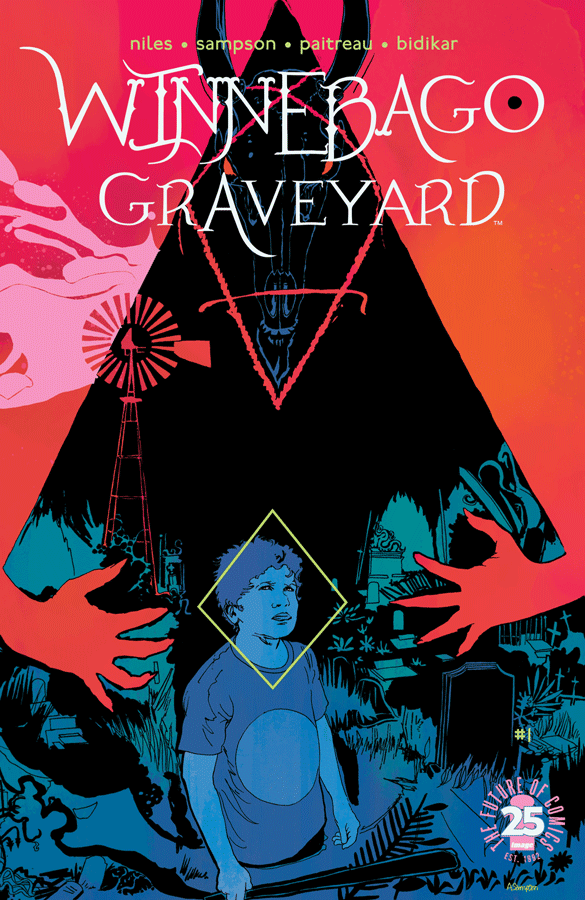 
Rating:
Winnebago Graveyard, a new limited series from Image Comics, is a love letter to the horror genre and that’s clear from the start. From the very first page, the series begins to feel familiar. Anyone who grew up with a love of old school horror films is going to readily recognize the terrifying potential of a rural, backwater town. And the subsequent panels and pages start to reveal just what kind of terror we’re going to be discovering as we continue on through the series.

It’s a creepy book in all the best ways.

And unlike a lot of horror comics these days the premise isn’t intended to be stretched out over the indeterminate length of an on-going series. Winnebago Graveyard will have just four issues and so the story starts to play out almost like a movie. That’s probably part of the reason why the book seems so familiar.

Steve Niles – a staple in horror comics and a lifelong horror movie fan himself – knows the story he’s going to tell and he throws us right in to  it.

The satanic rituals, bonfires, and human sacrifices that abound in the book’s dark, brutal introduction feel like the first scene of some classic, rural horror movie. Our innocent first look at the road-tripping family in their titular Winnebago elicits that familiar sense of foreboding. It all builds up this atmosphere of horror that we’ve seen so many times and that we all undeniably love. We know what’s going to happen to this family – or, at the very least, we know that what comes next won’t be good. And we know we’ll be seeing these crazy cultists again.

The bulk of this issue focuses on our wayward family: Dan, his wife Christie, and his stepson Bobby. We get a good look at their relationships and it probably serves the same sort of purpose it would in any horror film you’d watch. We’re learning to see them as people so that we care when their lives are inevitably put in danger.

They start out by making a pitstop at a rundown, kinda creepy roadside carnival and then, in the end, find their Winnebago missing and themselves stranded far from any real modicum of civilization. Why anyone would stop at a roadside carnival that clearly doesn’t operate under any sort of safety standards is beyond me, but it’s exactly what the victims in a horror story like this would do.

When they do find a town, it’s empty. Probably because all the residents are out committing murder in the name of Satanic rituals or something. But the ending leaves us on a cliffhanger wondering what’s going to happen to Dan, Christie, and Bobby as they explore this abandoned town – and what will happen with the people who live there come back.

The story is great and I’m sure by the end of the last issue I’ll be begging for Winnebago Graveyard to be adapted into the sort of movie it’s meant to emulate. Because it would be perfect for that. But I don’t know that a movie would be able to portray this book in as visually compelling a manner as Alison Sampson has. Her artwork is amazing. It captures the dark, raw horror of the story and even in the lighter moments her designs still hint at that terrifying atmosphere that the book is slowly building up. (Seriously, some of the carnival character and ride designs are kind creepy.) Stephanie Paitreau’s color work does a great job of polishing everything up and giving us this book a distinctive feel.

Now, when I said this book was a love letter to horror, I really meant it. And writer Steve Niles actually includes his own love letter to horror at the end of the book. But that’s not all that’s included. This book is is not just playing homage to the classics of the horror genre but it’s actually looking to spark a sort of conversation about horror.

There are two essays in the back – one by Sara Horrocks and one by Casey Gilly – that discuss certain aspects of the genre. In particular, these first essays discuss horror films set in the Southwest and Satanism in the real world. Each issue promises to include new essays on these topics, which I think is a really cool addition to the book.

Winnebago Graveyard is the perfect new series for horror movie fans. The atmosphere is creepy and the plot feels familiar and foreboding. The book reads like an old school, rural horror story and in that way it’s fantastic. It looks great, the story so far is dark and suspenseful, and there’s a lot of really great potential for future issues. At four issues long, I feel confident that Winnebago Graveyard is going to give us a really solid horror story that will leave readers completely satisfied from start to finish – and undoubtedly wanting more by the end.