“The Force Awakens” Brings Hope and Heart and is Absolutely Enjoyable 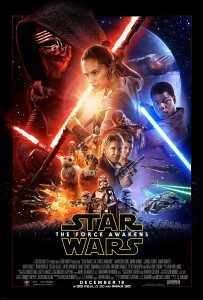 When a movie like Star Wars: The Force Awakens premieres, a movie with so much buzz and promotion surrounding it, actually facing the music can be the hardest part. Will it live up to expectations?

There can be no doubt that after the success of the original trilogy, the prequels’ release sixteen years ago came at a severe disappointment. Whatever your gripe with the prequels may be, it’s undoubtedly a lesser series. So after being fooled three times in a row, it’s understandable why some might be just a bit apprehensive.

So does The Force Awakens live up to expectations?

Going in with as little exposure to the film as possible (I stopped tuning in after trailer 2 dropped to keep some of the mystery), The Force Awakens was a non-stop emotional roller coaster. I didn’t grow up with the original trilogy, in fact, I watched them for the first time when I was in high school (feel free to use that against me should you disagree with my opinion). I had followed the prequels like any kid growing up in the early 2000’s, but it was a paltry introduction into the mythos.

Did I eventually love Star Wars? Of course. It’s incredibly difficult not to enjoy the series, but I can’t confess that I was ever truly hooked to the series like some. With the announcement of the new film, spearheaded by J.J. Abrams, I was cautious at best. I’m not even close to being a rabid fan, but even I feared reliving the prequels and fostered a bit of the cynic within me as a result. Although the first footage of the film made me hopeful, I kept it at an arms length and went in with the lowest of expectations, anticipating disappointment.

However, I never got it. Perhaps for the die hard fans, for the ones who have been theorizing for months, for the ones who have been pulled into the hype with impossibly high expectations, something will disappoint, that’s an inevitability. When you see a scene so many times, you begin to formulate ideals in your mind and when they don’t play out, it becomes a bit of a letdown. But there’s so little wrong with The Force Awakens.

It opens incredibly strong — showing off the best cinematic signatures of J.J. Abrams — jumping right into action in bold technicolor. He wastes no time in introducing characters and bringing them together to weave a story that trims the fat and gets straight to the point. While the political intrigue has always made for an interesting story on paper, I’ve always felt that one of the low points for the previous series was the intricacies of the political plot. The Force Awakens doesn’t cut that all away, but it does focus in on the meat of the story.

It’s exhilarating to watch newcomers Daisy Ridley (Rey), John Boyega (Finn), and Oscar Isaac (Poe Dameron) on screen, bringing new fan favorites to life while interacting with the ones we know and love. Finn and Rey are endearingly wide-eyed, representing the very beating heart of the film. They embody many of the finest traits of classic protagonists and it not only makes them easy to root for, but with their complexities, it makes them almost instant heroes.

The plot brings forth a new face of the Dark Side, the First Order. The few gripes I had with the film often concerned the First Order. The portrayal of the Supreme Leader Snoke, who felt a little bit like the Wizard of Oz, was almost too distant to be a true threat. The strength of the First Order is undeniable, and the new dimensions explored with the bad guys shows a depth to their totalitarian terror. However, Domhnall Gleeson’s General Hux is less imposing and more grating, while Adam Driver’s Kylo Ren becomes so humanized that he is nearly sympathetic (nearly).

While the plot goes strong on the themes and motifs that we love, it also is an image of history repeating itself. It can be a little repetitive to see them replay some of the same impactful storylines with new characters, but I wasn’t complaining. Dealing in equal parts humor and emotion, The Force Awakens more than makes up for any short comings in a few plot pitfalls.

While watching The Force Awakens, there is undoubtedly a sense that it was a labor of love. After all, J.J. Abrams has confessed to being a diehard Star Wars fan and it shows in his work. Although it plays hard on the original series, bringing back Harrison Ford, Carrie Fisher, and Mark Hamill, it’s an exciting introduction into the universe for first time fans.

The decision to turn characters like Han Solo and Luke Skywalker into characters of myth, and the jedi into urban legend, makes it the perfect landing ground for the beginning of a new series. Instead of being thrown into deep talk about the morality and ethics of the force or the scientific aspects of midichlorians in someone’s blood (cue my deepest eyeroll, not even 7-year-old Therese bought that), it’s a story about discovery. For newcomers, they’re meeting characters of legend, both in the fictional world and in our real one.

There’s something fantastically fun about revisiting Star Wars like this. The six films (yes, all six) set up a universe so dense that it brought to life countless off-shoots and tie-ins for the fans to continue living the story throughout the years. But to bring the stories back to life on the big screen is not only daunting for the creators, but also for the audience. So often this can lead to disappointment, and in an age of remakes and reboots it feels like moving from one disappointment to another, but The Force Awakens doesn’t merely revive a series, it creates something on its own. It’s not a homage, it’s a beginning.

An awakening. (Oh yeah, I went there.)

Final Thoughts: There will be naysayers and negative Nancys, but The Force Awakens does everything right, taking on the challenge in bringing a dearly loved series back to the big screen. With all the heart and soul of the series we love, it’s undoubtedly set to be a favorite for the years to come.