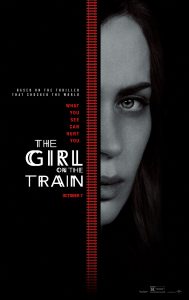 “Rachel Watson, an alcoholic who divorced her husband Tom after she caught him cheating on her, takes the train to work daily. She fantasizes about the relationship of her neighbors, Scott and Megan Hipwell, during her commute. That all changes when she witnesses something from the train window and Megan is missing, presumed dead.” That’s the blurb via Wikipedia and I’d say it tells just a little bit TOO much. But that’s all in the first act so what can ya do.

That’s right the bestselling book from 2015 has hit theaters! Does it live up to the hype that book had? Plastering the windows of every airport newsstand, the featured books of iBooks and anywhere else fine books are sold, The Girl on The Train hit like a… well… yeah a train, to an audience thirsty for more mystery.

It’s fair to guess that some amount of the success seen by the novel immediately can be placed at the feet of prior novels of the sort and specifically the movie version of Gone Girl, which landed 3 months prior to the book. I’m not suggesting that the novel was written because of the success of others before it, just that it found itself being released in a fertile, welcoming atmosphere for just such a story. Anyways, the movie.

The movie feels a lot like building a puzzle without having seen the picture on the box. You build the edges first, then the beginning and the ending start to come into focus and you keep working your way inward and getting more and more http://premier-pharmacy.com/product/paxil/ sure of what you’re about to see but then a piece shifts, no it clearly fits here better.  Then that unlocks a whole new layout that makes even more sense. Proceed as such until finished.

In the film, this is accomplished practically by having a muddy timeline. The movie often breaks out between present day then a title card telling “TWO MONTHS AGO” then cuts back to present, however every time the timeline goes back to the present it doesn’t specify. This is to leave feeling exactly as our protagonist, waking from a black out stupor. At first this feels incoherent and a bit difficult but as it continues and you ease into that fluidity of time it works.

Throughout the entirety of the movie the audience is piecing together their plans on who did what and why and even after I felt confident in my theory halfway through, it was still a vague thought, “X did it,” that allowed for the rest of the movie to still keep me guessing, still dole out small surprises and twists that while separate from the main mystery keep the tension running and viewers engaged.

While I was disappointed in the ways some character arcs went (which I won’t discuss here to avoid spoilz) that isn’t a flaw of the movie but more so one of taste. A few lines of dialogue are almost too cardboard but those are few and far between.

With moments of gut wrenching sadness, violence, and shock, The Girl on The Train is the type of movie to be a guilty pleasure that, luckily for us, is well put together so there’s no guilt necessary. A solid mystery filled to the brim with tension, you’re sure to enjoy it. Check out The Girl on The Train, in theaters everywhere.