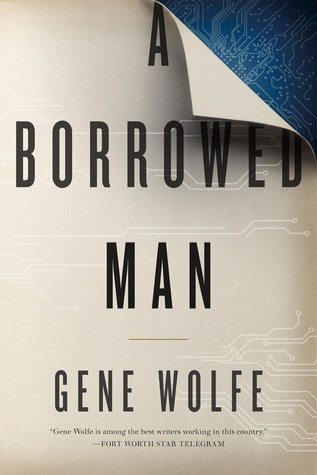 A Borrowed Man has one of the most unique premises for a mystery novel that I’ve seen in quite a while. I’m honestly not the biggest fan of the genre so it takes a really captivating plot to pull me in. While A Borrowed Man at times is very much a classic mystery, it’s futuristic setting and intriguing science fiction plot points make things feel fresh.

Set some hundred or so years in the future, A Borrowed Man follows the adventures of E. A. Smithe – the titular borrowed man. He is not, in fact, a real man but instead the clone of a long-dead mystery writer who lives in a library as reference material. Most of his days are spent living the mundane life of a library book, hoping to get enough interest from patrons to stay relevant and alive. But then one day the wealthy Colette Coldbrook appears and checks him out.

It turns out she needs his help. Well, she needs the help of the mystery writer whose brain scans and memories he now possesses. Smithe isn’t legally a man so she can’t just show up and ask for help. Instead, she checks him out and takes her with him to try and discover the truth behind the deaths of both her father and her brother. At the center of that mystery is a book that the real Smithe wrote and Colette is convinced that this cloned man can help her find the answers. But things aren’t that simple. As they travel across a transformed America their search for answers places them in some dangerous positions.

It all sounds very exciting.

Unfortunately, the mystery part of the book fell a little flat for me. It felt a lot like what I imagine a stereotypical mystery would be like – and that’s not necessarily a bad thing. At least, it’s not if you actually like mysteries. For someone who was far more invested in the science fiction and world-building of this futuristic society, that made the story as a whole a little hard for me to get all that invested in.

On the plus side, the more unique aspects of the story kept me interested. E. A. Smithe is a really interesting character and, throughout the book, he struggles a lot with his self-awareness and his status as a person. ‘Reclones’ as they are called are not considered human beings. It doesn’t matter that they have thoughts and feelings of their own – they are property. They have the minds of the greatest writers in recent history, but they can’t create new works. They have their own needs and wants but can’t leave their libraries without permission. Even when transferred between libraries on short-term inter-library loans they are transported like books – not people.

I thought E. A. Smith was a really fabulous narrator and his situation in life was rather unique. I was really interested in the reclone existence in general. With a background working libraries it was pretty obvious to me that this was going to be the part of the book I found most intriguing. I’m glad that in that regard the book was in no way disappointing. I loved learning more about Smithe, the rules he had to follow, the expectations held for reclones, and then seeing him begin to question them.

That prevailing question of humanity and self is what made me enjoy the book as much as I did.

A Borrowed Man is a really quick, easy read that I highly recommend to people who are looking for something different. Mystery fans, especially, should give it a look if for no other reason than to see the genre really shine while framed in a very different way than most traditional mysteries.

A review copy of A Borrowed Man was provided by the publisher in exchange for a fair and honest review. Nerdophiles was in no way compensated for this review. Our opinions are ours and ours alone.