Synopsis: While Reese is stuck on desk duty, Root, Finch, and Shaw are tasked with protecting a political analyst who stumbles onto one of Samaritan’s plans. We also get a look back in time to the development of the Machine.

Well this week’s episode hit me straight in the feels, and that is mostly thanks to Amy Acker’s performance as Root. It appears that since the team has gotten so big, the writers have taken to giving us more character-specific episodes. I’m totally game for this, as I enjoy getting to see one character step out and take the spotlight because it gives us a little bit of variety. This week, Root teams up with Finch, and Shaw provides back-up, to help a political analyst who figures out one of Samaritan’s schemes. It is very similar to an episode from a previous season, when an NSA analyst figured out the government had the Machine and was conducting off the book black ops and spying on the American people.

That’s probably the only disappointing aspect of this week’s episode: the similarity in plotline to an already produced episode. However, there were enough differences and a lot of forward momentum that this same kind of plotline lent itself well to. I really have no complaints, especially considering the focus was on Samaritan, the Machine, and Team Machine more than the number of the week. It was about time we had a greater plot arch related episode to help push things along and clue us in on what’s really going on in the world of artificial intelligence.

I also think I liked this week’s episode a lot because it does get back to the basics of science fiction. Person of Interest continues to spin science fiction into a show that could masquerade as a procedural and this week reflected that tendency. We learned a lot about Samaritan, the Machine, and a bit of Finch’s history with artificial intelligence.

First things first, the number of the week is a man named Simon Lee, played by guest star Jason Ritter. Simon is a political analyst who predicts the New York governor’s election incorrectly, or so everyone thinks. In reality, the numbers were fudged and he was right in his prediction. Something happened to throw them off and he wants to raise hell to figure out what.

This puts Team Machine in a precarious situation. With Reese benched due to shooting a guy in the kneecap again (and being forced to see a therapist who has taken to following him around), it is up to Root, Finch, and Shaw to protect the new number and get him out of harm’s way. Unfortunately in the process they find out that Samaritan is actually the perpetrator and the reason why Simon is in trouble. Apparently Samaritan rigged the election so that the other candidate would win and then had her killed so her lieutenant governor would step in and be Samaritan’s eyes and ears inside of the New York government.

This puts a kink in my original statement that Samaritan is not inherently bad. The entire episode focuses on the difference between the Machine and Samaritan through a series of flashbacks. In them, Finch is attempting to code the Machine but finds the artificial intelligences he creates do not care about humanity. They attempt to kill not only Finch, but each other when there are multiple intelligences running at once. His struggle is to teach an artificial intelligence that human life matters and in Samaritan we see the result of people who didn’t put that care and consideration into their programming.

Though thankfully Finch pointed out what I had said in a previous recap: Artificial intelligence is not evil, it is just driven by a set of objectives. Bad and good are human concepts and it is important to remember that no matter how highly advanced Samaritan and the Machine are, they are simply machines. This fact actually makes them a lot scarier.

However, I’m still under the impression that Samaritan is doing something else behind the backs of his keepers. In front of Greer, Samaritan appears to be doing what it was programmed to do. It has an assassin (Samaritan’s version of Root) to do the groundwork for it. Yet we cannot forget that Samaritan not only brought someone else under its wing in episode three, but also told her it would protect her now.

Anyway, all of that aside, Samaritan is pulling some hinky schemes and Team Machine risks blowing their cover. Specifically, Root. This episode was all about her, and if we get nothing else from it, we need to get her character development. It is revealed, as Root is working side-by-side with Finch, that the Machine is no longer talking to her. She admits that it is too dangerous and Samaritan would know about her if she were to speak. Finch points out that Root appears lost without her and Amy Acker delivers a stunningly emotional performance with so few words. Her character is so defined by the Machine that in losing contact, she’s lost a bit of herself.

Later in the episode, when everything seems bleak because Simon is stuck in a hotel with Samaritan’s goons breathing down his neck, Root steps up. She acts selflessly, and Finch calls her a friend. It is a bit controversial for him to call her a friend, especially after all they’ve been through. I mean, Root did kidnap, drug, and force Finch to watch her murder a guy. She traumatized him. Yet now they’re friends?

I think this is best explained by looking at the character development, because this is a crucial turning point in the history of Team Machine. Even though they’ve all been working together for quite some time, Finch still hasn’t fully trusted Root or the Machine. Root, being the representative of the Machine, scares him almost as much as the Machine does now that she is doing her own thing. In this episode I think he got the chance to finally separate Root the person from the Machine and finally saw her as the vulnerable, lost little girl she always was.

It doesn’t erase what she did, nor do I think his extension of friendship means that they’re going to be best buds. Rather, I think it marks a turning point in Finch’s character, too, which is also why this episode is so important to the building plot arc.

In accepting Root for who she is and what she is doing, he accepts the Machine and her quest. He has no 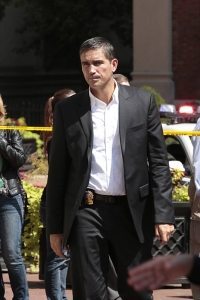 choice, not when the stakes are so high and it isn’t just his life that hangs in the balance but the lives of a lot of people. If he were to hold on to his grudge and his mistrust, the team wouldn’t work. They would not be able to move on and face the bigger threat. It would always be a wedge between them.

He has to accept the Machine, and that involves accepting Root, too. Regardless of their history or the terrible things she’s done, he has to accept her and extend and olive branch. Otherwise, I truly believe they won’t survive Samaritan. They have to work together or else it will all fall apart, so he also allows himself a selfless act. Finally they come to neutral ground and can move forward. It is truly a new series starting from this point.

So Root goes out and kicks ass, directing Samaritan’s attention away from Simon. Simon then gets captured by Shaw, aided by Reese who decides to break his desk duty rules. Together they dump him in his office where Finch finds him and convinces him that there was no conspiracy after all. Simon gives in and is safe because he’s no longer a threat to Samaritan. The number has been saved.

The cutest moment of the night? Root asking Finch to let Shaw know something if anything were to ever happen to her, and Finch telling her he’s certain she already knows. I appreciate the Root and Shaw dynamic a lot.

Finally, Finch takes his leave after he is assured the number is safe. The episode ends with him looking to a video camera, marked by the Machine, and tells her they need to talk.

One thought on “Person of Interest: Prophets Recap”