Edge of Spider-Verse #5: Enter the SP//dr 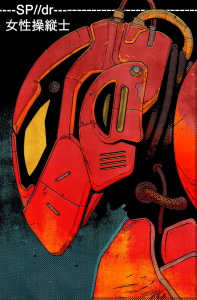 I have to admit, I was immediately sold on Edge of Spider-Verse #5 from the moment I read Gerard Way’s description of it. A Japanese teenage girl who drifts in a giant robot with a radioactive spider? It’s so bizarre and yet so perfectly Way that there’s no way it couldn’t work.

Well, it definitely works, but not in the way I thought it would.

The issue is titled “SP//dr” and it follows the story of Peni Parker, a Japanese teenager who is the pilot of a giant robot named SP//dr. Her estranged father Peter was the previous pilot and due to genetic match ups, Peni becomes the next in line after Peter dies in the line of duty. This involves being bitten by a radioactive spider that forms a psychic link with her.

I was kind of expecting the story to be a bit more bombastic, but instead, it ops for a more quiet sort of pace. It kind of reminds me of Way’s previous work on The True Lives of the Fabulous Killjoys in how even the more chaotic moments feel lyrical. However, Peni is definitely not a copy of The Girl. Both characters are trying to find who they are in life, but Peni is definitely the more quiet and more mature of the two. Still doesn’t mean that she isn’t going to listen to pop music that screams “I am a teenage weapon” while kicking some Mysterio ass though. Or that she’s not going to get scared or ask Daredevil what her dad was like.  She’s still a teenager, which just endears her to me more.

Honestly though, I don’t know if this story would have hit the same without Jake Wyatt’s art. Some might recognize him from his work on the Ms. Marvel arc where she teamed up with Wolverine, but his style here feels more reminiscent of a cyberpunk anime from the 80s. Which, really, the whole concept of SP//dr is basically that. You can tell Wyatt was having fun with it though because besides the fight sequences, he manages to sneak in cameos from various anime characters as well as a few Marvel creators as well. I also feel comforted knowing that in the world of SP//dr, Kamala Khan is out there as well.

Also, their Daredevil is rad as hell. I don’t know how likely Peni is to take off beyond this issue, but I would love a series of Peni Parker and Matt Murdock solving crimes.

Final Thoughts: While a little less bombastic than what I thought it was going to be, SP//dr is still an amazing entry into the Spider-Verse as well as just a fun tribute to 80s cyberpunk anime. I can only hope Marvel will allow Way to come back and play in the sandbox more in the future.