Eighth Grade Reminds Us of the Ups and Downs of Youth 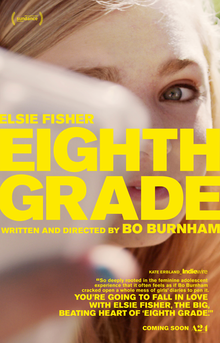 Eighth Grade reminds us of the familiar growing pains in that unbalanced time transitioning from middle school to high school. Despite the film being a product of its time, Eighth Grade is timeless in many ways.

Our protagonist, Kayla, is lonely, kind, and awkward. she spends her days recording YouTube videos giving her nearly-non-existant audience advice that she knows she should take herself. Hindered by the obstacle course called puberty and anxiety, Kayla wants what most people want in life. She wants friends and people who like her, she wants acceptance from her peers, she wants to be taken seriously, and she wants to perfect growing up. Despite these desires, we get an intimate perspective of just how imperfect her life is.

Loved and raised by her single father, there’s a familiarity between how Kayla and her father interact during dinner. Not many adult audiences grew up with cell phones and the ability to connect with our friends on social media at all times, but we can all relate Kaylayla wanting to tune out the world and do what she wants instead of what her dad wants. That developing desire for independence is a key aspect of growing up. Many of the moments in eighth grade are unique to Kayla’s circumstances and yet totally relatable for the audience.

Rejection, depression, anxiety, self-doubt; Kayla’s obstacles are not childish at all. She’s simultaneously mature and inexperienced. Her desire to be accepted is palpable in her meeting with Olivia, a kind high schooler she befriends while shadowing her for the day. We get the sense that Kayla is very alone in her life. The only party she attends is one where the birthday girl is forced to invite her. The boy she’s interested in only has his attention piqued when she mentioned nudes. She makes lists of her goals of being more confident, making more friends, and finding her best friend while eating alone at lunch.

Even when surrounded by her peers she struggles to start conversations with them. At times, we’re desperately rooting for her, hoping that she can put herself out there and succeeds but also eager to protect her from the world that might want to take advantage of her or hurt her.

In many ways, Eighth Grade is a movie for parents and adults. It gives a look at the life of a preteens and teens today, but not a glamorized look where the world is filled with screens and likes and retweets. Kayla’s world is familiar.

We know exactly what it’s like to want that first kiss, to want to be friends with the most popular person, to be ignored by people at school. Eighth Grade doesn’t shy away from adopting popular bildungsroman tropes. After all, this is a coming-of-age story, it deserves the full treatment. These stories are about change and for Kayla, change comes to those who are willing to grasp it.

We get the sense that, when she opens her time capsule, she feels a sense of dread. Watching the video of her pre-middle school self talking to her now post-middle school self, we see that a lot of her hopes, dreams, and expectations haven’t been actualized. It’s a coping mechanism, to hope that even if things aren’t good now, they must be good in the future. But for Kayla, at that moment, things are worse.

Confidence shattered, the heartfelt moment between Kayla and her dad is not only beautifully cathartic but desperately needed. Her dad affirms all the things that we, as the adult audience, knows are true. She’s fantastic, she’s a creative, funny, genuine, and intelligent girl.

Her fears that her father might be sad to have her as a daughter are completely unfounded. Her fear of disappointing the one who loves her the most is suffocating but her father is quick to ease her worries. We learn a little about Kayla’s past and how difficult it must have been for her father to raise her on his own, and we see a growth between the two of them that gives Kayla the push she needs in life.

She speaks up for herself, makes a new friend, goes in a date/platonic dinner, and seems to be baptized by the fires of middle school, ready for high school.

Eighth Grade is hilarious and heartwarming, while also keenly striking close to home in tone and composition. Scenes like Kayla being invited by a not-friend’s mom to their birthday party and being caught practicing kissing on your hand are almost too painfully relatable. Her encounter with the boy in high school and her dealings with her crush forecast a future of questionable men born from a toxic masculine society while her blossoming relationship with Gabe shows the potential for friendship in unlikely places.

We can’t recommend this one enough, if last year’s critical coming-of-age hit was a graduation from high school to college in the form of Ladybird, this year, we’re going from middle school to high school with Eighth Grade.