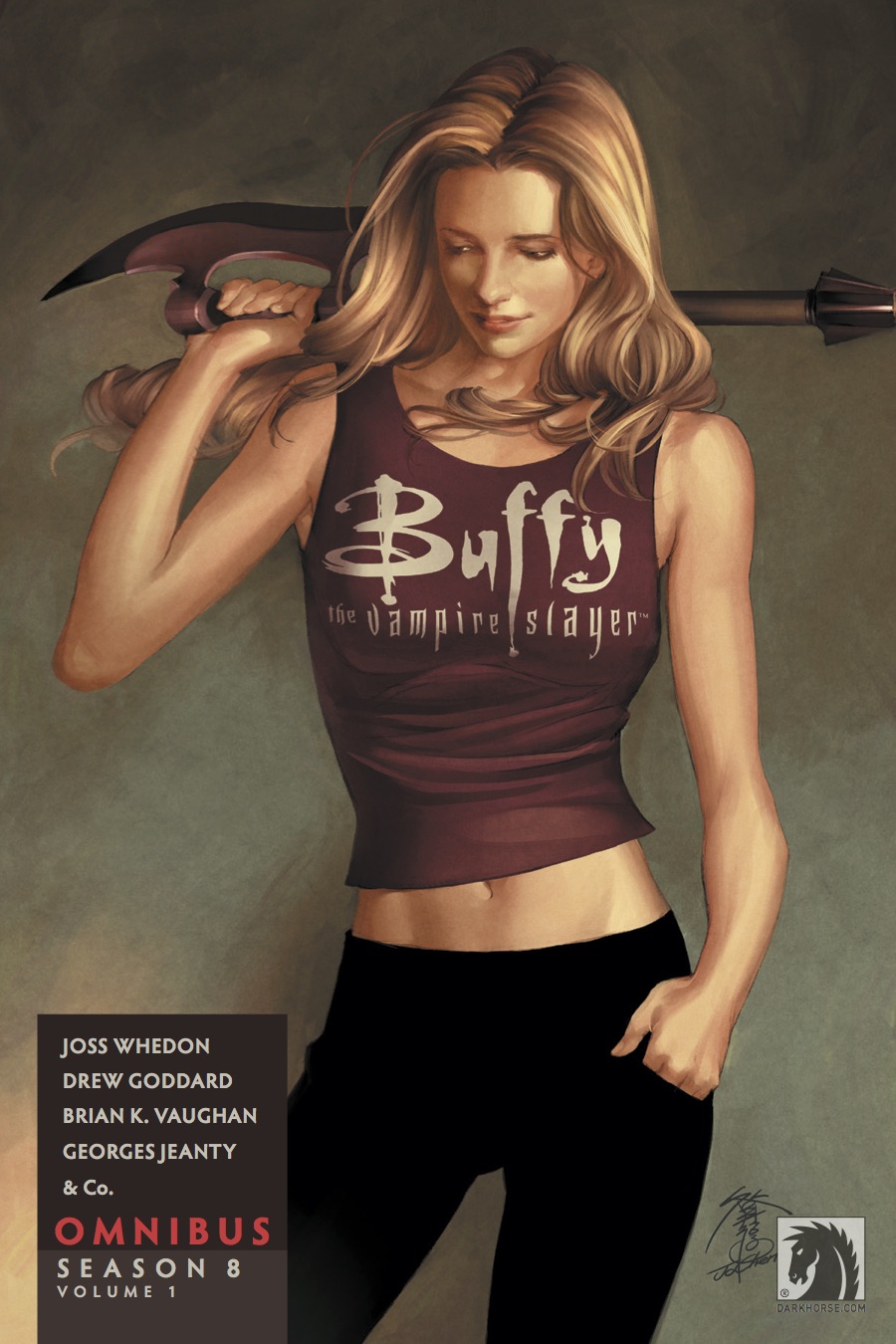 Rating:
Buffy’s back with a ragtag team of thousands of slayers and a badass Xander in Buffy the Vampire Slayer: Omnibus Season 8 Volume 1 by Joss Whedon. As expected Whedon successfully weaved together a storyline that keeps the feel of the TV show alive. It really, really made me wish that the show was still airing, because some of these scenes were insane (others a bit confusing if I’m being honest!).

Picking up right at the end of the season 7 television show, Whedon fills readers and fans in on what Buffy has been up to. She’s taken the thousands of slayers under her wing to protect them while they train. And they do what slayers do best, slay. Buffy is still the head slayer in charge and she means business. Xander dons an eyepatch and a swanky uniform that makes all the ladies swoon. Or at least it made me swoon!

It’s pretty amazing to see how much Xander has grown into his confidence and is basically Buffy’s eyes and ears when it comes to missions. He’s still the witty joke teller, or rather to some the corny joke teller. Dawn is still a brat. Sorry, but it’s true. She didn’t listen to Buffy then and she sure as hell isn’t listening to her now. Dawnie somehow managed to mess around with a Thricewise, which caused her to blow up into a giant.

One of my favorite sequences was Buffy and Dawn having a chat about the Thricewise and Buffy realizing that, even though she’s saved the world, she still has sisterly problems to deal with. Plus the chat humanizes Buffy and makes her realize how much she misses her mom, her friends, her old life, and how things used to be.

Whedon keeps the essence of the characters by nailing their exact voice and banter. I really enjoyed Willow’s character and her journey. In the beginning of the show she was quiet, reserved, but now she’s full on powerful mother earth. It’s nice to see an underdog like Willow come to the forefront and be able to hold her own. Buffy relies on her as does Xander and it definitely brings back the feel of the show in a refreshing way.

Some time has passed from season 7 and Whedon took the opportunity to explore new challenges for Buffy and the Scoobies. I was surprised to not see Giles as involved with Buffy, but I guess things were eventually going to change, right?

The art was inconsistent throughout for Buffy. There were times I found myself reading panels and didn’t even realize it was Buffy! That said, I did however think the other characters were done really well. I especially would like to call out how stunning Giles and Faith were. They looked exactly like the actors from the show. Whedon also did a fantastic job with these two particular characters. Also, the dialogue between Faith and Giles was so authentic! I would love a spin-off focusing just on Faith, whom I loved as a slayer!

Old enemies resurface and new trouble brews as Buffy’s life is threatened. As per usual, the people who love and care for Buffy are the ones that tend to get hurt.

Buffy gets knocked down but she always gets back up. I love how this comic evokes and reaffirms the message of “girl power.” It’s a true feminist story that really, everyone should read, the kickassery is just an added bonus.