Rings: First You Watch it. Then You Try to Forget It. 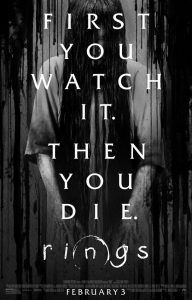 Wow just what a turd. Guys, I’m not even gonna get flowery with it. This movie is not good. It begins terribly rough, then about 15 minutes in starts developing an interesting idea (which is cribbed from the ‘Rings’ short film from the 2005 DVD) featuring a group of people all watching Samara’s cursed VHS (this time on laptops mostly) and documenting it and passing it along etc etc.

But that idea is quickly left behind by characters you don’t care for, who deliver lines that even they don’t seem to believe, while chasing down a story that felt like it was already told before, and even if it wasn’t so was so blindly predictable it seemed that way.

I did not enjoy this movie. I can’t recall the last time I was so uninterested in what I was watching while in the theater. I’d guess Bye Bye Man but that was so terrible it kept me guessing about how terrible it would continue. This unfortunately had the benefit of being a movie made by seemingly competent people who just decided to tell the most bland excuse for a movie, and get actors who couldn’t be arsed to perform.

Seriously, it was in the second scene with our heroine that I became certain that she did not speak English, at the very least not natively. Every single one of her lines is delivered bland and monotonous. I daresay, worse than the prequels! But here she is, because she is gorgeous of that there is no doubt. And that’s the state of horror for you.

If no one in the movie seems to care, and the story is just so damn rote, how do you expect anyone else to? Oh and D’Onofrio shows up for god knows what reason. He seems to like popping up in a couple bad movies a year I guess – keeps the Netflix Daredevil buzz from getting to his head.

I can at least take solace in the fact that everyone in the theater with me appeared to feel the same way. I have never noticed so many people leave during a movie to use the restroom. Or the girls in the bottom half of the auditorium who took three chances to terrify their friend (it worked) and for the rest of the audience to not care in the slightest. Usually you’d expect some admonishment from the crowd on the second interruption at the least. Not here. The cry and then laughter of enjoyment was a welcome diversion from the snooze worthy screen.

Rings  is out now. But don’t see it. Really, there is no reason to. Just re-watch the original (Japanese or American remake) and enjoy that. It’s what you’re hoping for anyways.