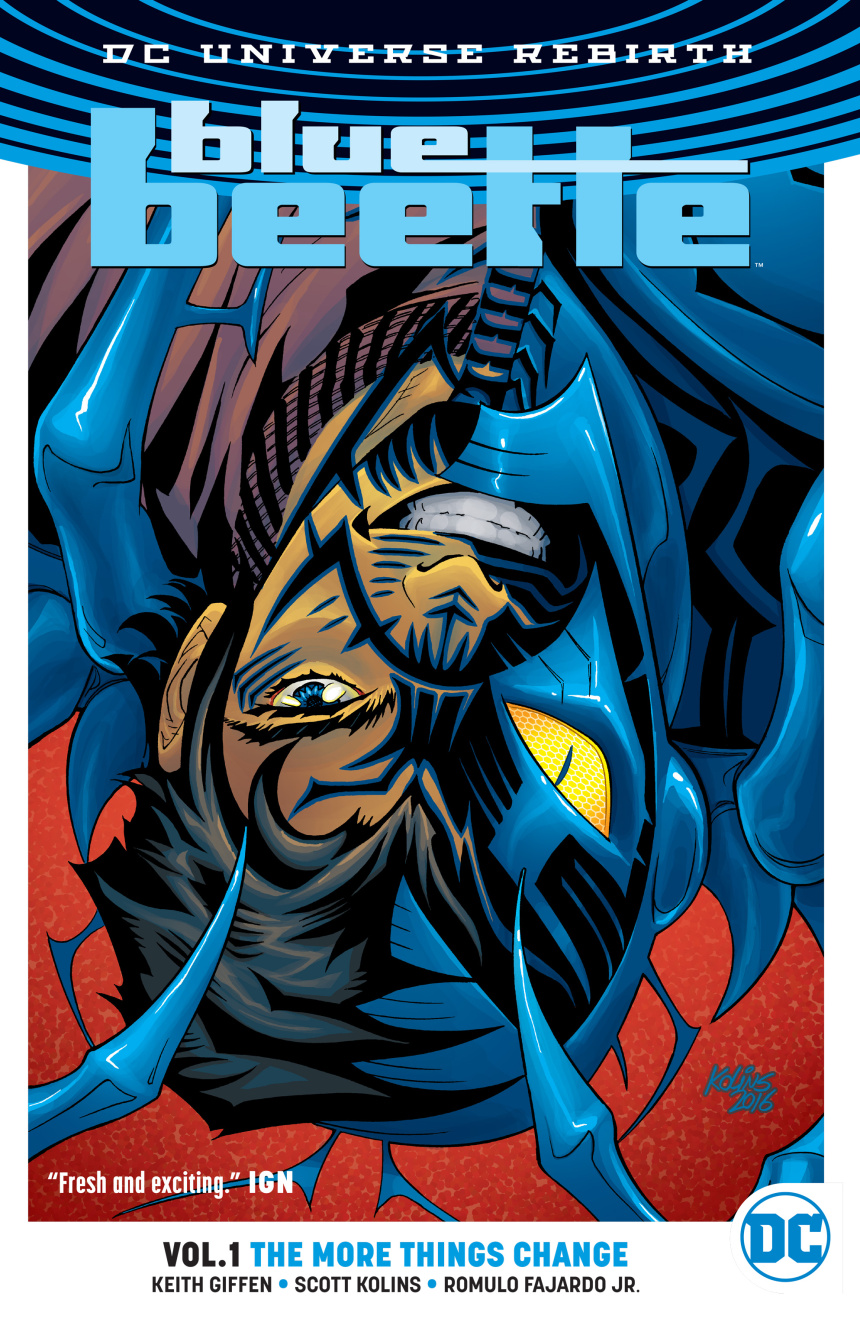 
Rating:
I’m admittedly not a huge DC Comics fan and I generally only follow the few books that pique my interest. So please forgive me for not knowing everything else that’s going on with their latest ‘Rebirth’ branding. I picked up this first volume of Blue Beetle because I have been waiting for years for Ted Kord to come back from the dead and here we have him back in action. Well, to an extent. Paired up with Jaime Reyes, who succeeded him in the titular superhero mantle, this book had a lot of potential.

I was hoping the new Blue Beetle series would be DC’s answer to Matt Fraction’s Hawkeye. Unfortunately, while the two series have a lot in common (two heroes from different generations with the same superhero name working together to fight crime) Blue Beetle doesn’t quite have the same charm. It’s disappointing because I love these two characters on their own and I love the idea of them together.

Blue Beetle casts Jaime as the reluctant hero and Ted Kord as the boisterous, up-beat superhero retiree. With his own heroism put on hold, Ted’s dedicating his money and resources to helping Jaime use the mysterious (and unwanted) scarab that’s taken him as it’s host for good.

The concept is great and there’s a ton of potential there but by the end of this first volume the book has yet to live up to it. Part of the problem is that the book doesn’t focus enough on their relationship. Ted should be a mentor but as far as Jaime seems to be concerned Ted comes off a bossy, unwanted interloper in his life. And we don’t seem to be moving on from that impression.

Relationships are presented as being a key part of this book, but they don’t get nearly as much attention as they could. Jaime has close friends he trusts and who know his secret. He has strong relationships with both of his parents – and with his younger sister. Even Ted has an inner circle of trusted co-workers that he’s brought in on the scarab project. But Jaime’s friends’ bickering gets incredibly annoying after awhile – and their bickering gets an unnecessarily amount of panel time. The focus on Jaime’s mother and her growing involvement in the superhero world is great – but she ends up as little more than a means for the bad guys to get at Jaime.

And speaking of bad guys and villains – the ones we’re introduced to in this book really aren’t that interesting. There’s a lot of meaningless conflict in this book. None of it really seems all that engaging. Still, we’re treated to a handful of incidents that are generally forgettable. And while the Posse – the local band of super-powered anti-hero types – were interesting they too came off as a largely expendable point devoid of significant meaning. The more intriguing plot points – namely Dr. Fate’s interest in the scarab and the ways the scarab may be trying to overpower Jaime – get way less attention than they probably should have.

I went in wanting to like this book. And to be fair, I like it well enough. I’ll keep reading it because I have been waiting too long for Ted Kord to come back to life to stop. But I want it to be better. I want Blue Beetle to be better and the story more interesting. I want to see more of Ted and Jaime cooperating – and less of Jaime’s friends bickering.

This book has a lot of potential. It just needs to reach it. Jaime is such a great character that he deserves an equally great standalone book. At this point, though, the Rebirth title isn’t quite there. Hopefully, the storylines they’re working through will pay off and the series starts working through it’s problems to become a stronger title. I’ll keep my finger’s crossed.