Robert De Niro is “The Comedian” 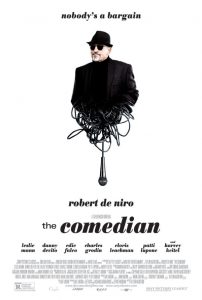 The Comedian is a slow aimless trip through an aging comic’s life. Robert De Niro plays Jackie Burke, a comic best known for his appearances on the TV as the title character of Eddie’s Home. It’s a two hour stroll through his aging life, from getting in a fist fight with a wannabe YouTube personality, through trying to get back into the swing of things, meets a woman (played by Leslie Mann) and beyond.

So here’s the thing. The movie doesn’t have a strong, focused plot. It goes here and there, wherever it feels natural to follow this character’s life and the scenes are stuffed full of charming actors. I mean top to bottom this movie is filled with comedians of all stripes, often as themselves, but almost universally charming.

However, with all these comedians involved, you’d think the actual comedy would be… more funny? Specifically in any of De Niro’s several stand up scenes his jokes are less than great and frequently had me hoping the movie would skip to the immediate aftermath from then on. I can see how having a movie with a comedian as the focus and never see them performing might be a complication, but when the stand up is so weak, it makes the movie rougher for it.

In addition the many comedians filling up the roster, the cast is stacked with Leslie Mann taking a turn in a role only slightly different from pigeonholed ‘anxious, high strung mom,’ Harvey Keitel as her mobster dad, and Danny Devito as Jackie’s brother. They all are great in it, Devito in particular plays a great brother with the kind of love and competitiveness that makes it feel right.

Another hiccup in the flick is the frequent, often askew millennial bashing. Don’t get me wrong, I think there is plenty to hate on when it comes to my generation but The Comedian misses the mark on it or does it in such ham-fisted ways I can’t help but roll my eyes.

One deals with the head of a new local cable network in New York, a character who exists as little more cardboard target for the generational attack. The character is vapid, feigns sincerity, and the like. Later they’re used in a scene reminiscent of Fear Factor in which they’re ruining a man in front of his family for ratings. The message seeming to be that for all the progress being made culturally, those same crusaders would be happy to watch people be ruined in front of their children. Maybe I read too much into that.

De Niro’s character has no arc. Is that good or bad? I’m not sure, but it certainly stands in the face of everything we know about protagonists and story structure, but that’s fine. It’s his stubbornness that is his defining trait. He is a stick in the mud who does not grow or adapt to his environment, instead relying on the world to catch up with him as he goes viral not once, not twice, but three times(!) all in ways that eventually save his career. And that is perhaps the worst scene of this movie.

When Jackie Burke goes viral the second time singing a weird number in an old folks home about ‘going poopy,’ which finds its way edited and laid over some sick beats (/s) he gets another break at a tv show. This is perhaps the clearest flag to show this movie is written by somebody out of touch.

Any time a movie says something ‘goes viral’ and then proceeds to show exactly what it was is setting itself up for failure. It is damn near impossible to predict what will catch on with people in any given moment, but you can be certain that anytime a movie show a viral hit it is cringeworthy. Maybe that’s the filmmaker’s final comment, that the things that attract our attention are garbage.

All that said, I did find myself enjoying the movie for what it was. I enjoyed the long scenes and the meandering pace. It was a weird journey to follow Jackie Burke on, if only he had done anything of substance to really make it sing.