Colonial Issues Aside, “Tarzan” Still Bores Instead of Thrills 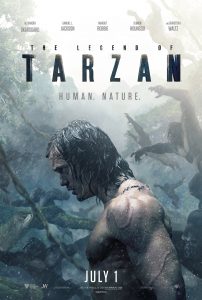 Based on Tarzan by Edgar Rice Burroughs

When any movie has an ensemble cast, it can either be brilliant or horrible. Unfortunately for The Legend of Tarzan, it teeters more or less in favor of the latter. With Alexander Skarsgard taking on the lead hero, complete with the perfect body and attitude, Tarzan swings through theaters but barely leaves any trace of something good. The essential problem lies in the story that Tarzan is trying to tell. It’s not really a familiar story — not the one that we know, at least — and that’s been the issue for a few of these classic re-tellings. Successes like Cinderella and The Jungle Book do little to change the narrative that Disney has painted for us — save stylistic changes — while remaining true to the animated inspiration. Tarzan forges this (partially due to the fact that this is based on the Burroughs’ story and not the Disney animation), forging its own path and in the process it fails to really have the impact it demands.

Some of the things that I loved in Disney’s animated Tarzan — which this film is not based on, or associated with — rely in character types. Kala, Kerchak, Terk, Tantor, Professor Porter, and even Clayton all played vital roles in coloring the story of Tarzan and his relationship with Jane. Sure, Tarzan’s own story is nothing to laugh at, but who is Tarzan without the family that raised him? Who are Tarzan and Jane without the obstacles that they face? Disney was able to capitalize on the emotional quality of the story originated by Edgar Rice Burroughs. The Legend of Tarzan merely mentions the animal characters and decides to write a “homecoming” story for the hero.

In this tale, Jane is the daughter of an American professor who has come to the Congo to teach English. She was raised in Africa among the people. Tarzan was still raised by gorillas, but to the people outside of the jungle he is a mythical being. He grows up to hate humans, and even starts a blood feud with the leader of a tribe because of this. There is little evidence of a strong connection between him and his gorilla family, there is definitely animosity and understanding, but little of the affection that might stir feelings with the audience. In fact, you could say he has a better relationship with lions and ostriches and water buffalo than he does with the animals who raised him.

Instead of a story surrounding the hunting of gorillas or perhaps even a more general look at Tarzan’s relationship with all of “civilized humanity”, The Legend of Tarzan tackles a much more sensitive and difficult topic. It braids in the historical figure of George Washington Williams and lesser known historical figure Léon Rom, in a story about slavery and European colonialism within the Congo.

While there are certainly highlights to the film: Skarsgard’s athleticism and character acting, Margot Robbie’s general effervescence and charm, Samuel L. Jackson’s perfectly timed humor; ultimately, it leaves much to be desired. The film generally feels like the sequel to a much better film, with Christoph Waltz taking on a villain who is pretty much the same as the one that brought him to the spotlight of Hollywood. Léon Rom is a less despicable, less interesting, and more Belgian Hans Landa.

Even though Waltz does his best with what is given to him, it can’t be denied that there is something that just doesn’t quite work. The anti-colonial theme feels heavy handed and unnecessary. It is merely teaching a lesson that we’ve learned centuries ago and offers nothing new to the table as far as a political or social discussion goes. We could talk about the odd feeling you get of a bunch of Congolese clamoring around white characters or how the final victory of the film really isn’t a victory at all if history continues on course, but somewhere along the way the message of the film gets muddled.

The film constantly feels like it’s half-in and half-out with the theme. Instead of embracing the more ridiculous aspects of the story of Tarzan, it dials back, but it is impossible to dial back a story about a baby who is raised by gorillas! There is no way but to play it loud and proud. Even with some questionable CGI, there was a much stronger story being told in Tarzan and Jane’s connection to the jungle and nature when forced to face the loss of identity when they live in England than to the story of invading Europeans in the Congo. The film follows a loose outline of Burroughs’ series, but its personal flourishes only serve to harm the story. There’s no need to bring in talking gorillas or hypochondriac elephants, but you can’t abandon the soul of the story that the audience knows. The metaphor of a character like Tarzan speaks for itself, it does not need more framing narratives to emphasize the point.

Final Thoughts: While it certainly has its moments of fantastical flare and heart-pounding action, The Legend of Tarzan falls flat in its story telling and could benefit from trimming some of the political fat of the story to play on the classical themes of the tale. Leave this one for the home theater.