“The Purge: Election Year” Infuriates, and I Guess That Makes It Effective In Some Way 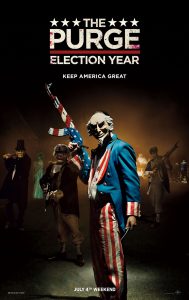 I have a very rough relationship with The Purge series, in general. The first installment, The Purge, stands as one of the only movies I have ever considered walking out on. I love movies, and I have willingly paid for a movie nearly every weekend since I was about eleven, I’ve never actually walked out on one. The Purge was a case when I seriously considered simply just leaving the theater and perhaps going down the street for a taco or just riding the subway around the city instead.

I don’t actually hate the series. In fact, The Purge: Anarchy redeemed the series massively in my eyes. It highlighted on the social issues that were entirely missed in the first film, while delivering the same amount of gore and eye-roll inducing horror. As a general rule anyone who is taunting or violently suggestive in movies do not scare me, they deeply annoy me to my very bone.

While Anarchy severely dialed back on the “annoying murderous rich people” vibe, it seemingly turned that dial right back up in Election Year. And although the subject matter of Election Year might actually be the most interesting of the three films, it can’t really escape from its heavy-handed story telling.

In the world of Election Year all rich people are murderous psychos, America is populated by teens who don’t even blink when it comes to murder, and mercenaries somehow have to be neo-nazis (I’m not even going to touch on how literally any other mercenary would have done the job). It’s infuriating to watch if you walk in with even an ounce of logic and reasoning in your bran. Check those at the door along with some humanity if you want to enjoy this without getting an anger-induced migraine.

Of course, that is kind of the point of The Purge films, isn’t it? At least that seems to be James DeMonaco’s vision as he steers the narrative closer towards social discussion, and merely uses violence as a sort of gruesome decoration to his story. Aside from a few psychotic teens and blood-thirsty European murder-tourists, most of the violence centers around a plot. It isn’t mindless killing, the killing actually kind of serves a purpose. And even the teens and tourists serve to tell a story in the grander tale.

As much as I enjoy Frank Grillo and Elizabeth Mitchell in this, the cast are perhaps the only true saving grace. The subject matter and zealous dialogue nearly drowns the love I have for the main protagonists, who are all well acted and bring their own level of depth to the story.

Election Year does its job in impacting the audience in the same ham-fisted way it has always done. Its shout-out-loud commentary on a blood thirsty and ridiculous election year in the real world is well-noted by the audience. Perhaps for those looking for another example to compare our election year and our candidates to will enjoy making the obvious joke about how the real world is worse than a Purge movie, but the film itself does little for us. It offers a sort of satisfaction that is likened to a drug, numbing and ephemerally satisfying, before becoming meaningless. This offers no message other than the obvious takeaway. It’s a fictional movie based around extreme concepts, populated by characters who are either good or bad — lacking huge amounts of anything in between — that ends in essentially the same place it began.

Final Thoughts: Purge fans will love it; it’s a high step up from the original, and even the sequel. And even those who weren’t fans of the first film might enjoy this one. For those who indulge in outrageous concepts, and want that dash of social commentary to make the story seem three-dimensional, check reality at the door and enter the theater.