Through the Looking Glass, AKA Alice’s Technicolor Dreamcoat 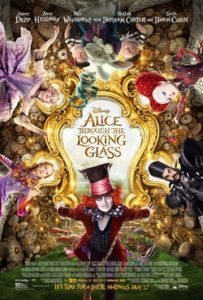 Back from her previous adventures in Wonderland, Alice has been traveling the globe in her father’s ship since audiences last saw her. After she escapes her latest scrape, Alice returns home to find her mother is in dire financial straits – she wants Alice to marry and settle down to save their family.

Alice escapes to Wonderland again (through a looking glass!) for more adventures. When she arrives in Wonderland, she discovers that Hatter has taken gravely ill – after finding a childhood memento, he is convinced his family is still alive. Alice then has to travel back in time to save Hatter’s family to cure Hatter’s sickness.

The plot of this movie was fairly thin – after Alice realizes she can’t alter past events, the whole ‘traveling-back-and-forth-through-time’ schtick loses all its plot value. Traveling through time becomes less of a madcap dash to save future characters and more of a drawn out way to lazily illustrate key characters’ backstories.

The actors all do well with what little dialogue and plot they have to work with – Anne Hathaway is a standout as the painfully over-acted White Queen and Sacha Baron Cohen as Time is hilarious – but even the A-list cast can’t save this solid C+ of a movie.

If there was one positive aspect about this movie, it was that the costuming and the visuals were stunning. But for the love of all anti-nausea remedies, DO NOT SEE THIS MOVIE IN 3D. Not only is it completely unnecessary, it will make you want to technicolor vomit all over the swirling, frame-shifting, technicolor Tim Burton-on-psychotropic-drugs screen. The oversaturated candy-like colors alone made me sick after the first 15 minutes, let alone when they aggressively jumped out from the screen.

Seriously, the 3D is highly ill-advised.

Final Thoughts: Alice’s second adventure is colorful and mesmerizing on the big screen but ultimately has very little entertainment value outside of the visuals. Skip this one and see it when it’s out on Netflix. The movie is about 45 minutes too long and the thrill of the visuals fades into a headache in about a third of that time.