Goldie Vance is on the Case in BOOM! Box’s Newest Series! 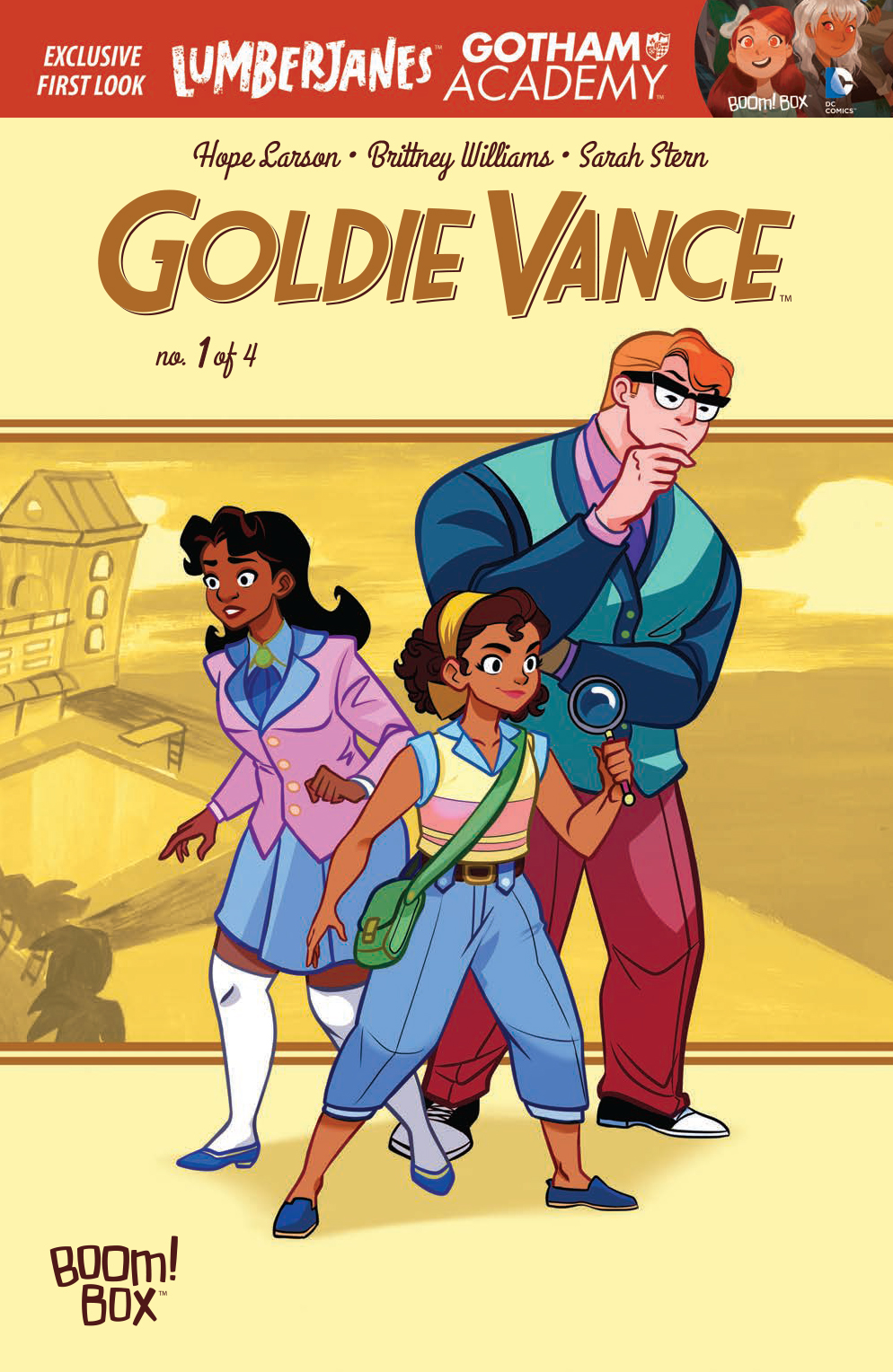 Set on a resort in the 1960s, Goldie Vance is a series featuring an all new heroine in the vein of Nancy Drew and Veronica Mars. The titular Goldie Vance is the daughter of a resort manager who works as a valet during her normal shifts and at other times lends her talents to assist Mr. Tooey, the on-staff detective, in solving the problems of the hotel’s many eclectic guests. From tracking down lost children to searching for a thief among the staff, Goldie does it all!

In the first issue Goldie finds her ‘professional’ life and personal life getting a bit intertwined when a German visitor’s necklace goes missing. She and Mr. Tooey start investigating the staff but when she goes off to her valet job it becomes clear that the culprit may not be so mysterious after all. When she discovers the thief is a boy she works with and who has a serious crush on her astronaut-crazy best friend, she decides to help him out. Helping him out just happens to mean challenging the greaser he lost the necklace to earlier to a drag race.

Yeah, this girl gets to drag race.

After winning back the necklace she goes back to the hotel to speak with Tooey. It turns out that the necklace was just costume jewelry all along. But sentimental value and all that right? It doesn’t bother Goldie – at least not until they find that the German guest has gone missing. This sets the stage for what I assume will be the mystery at the forefront of the series moving forward.

We’re left with all kinds of questions at the end of the issue. Who is the German visitor really? Why does he care so much about fake jewelry? Where did he go and/or who took him? Is Goldie in danger because she still has the necklace?

So many questions but so little time!

This first issue is a great start to what may easily become one of my favorite all-ages miniseries of all time. And that’s sadly what Goldie Vance is: a miniseries. It’s absolutely criminal that Goldie’s adventures are currently set to run for only four issues.

Goldie Vance is the kind of heroine we need in comics today!

She’s an amazingly resourceful and clever girl taking the lead in her own mystery series. This is a girl who doesn’t see obstacles but instead sees solutions. She believes the best in people even when they make some pretty big mistakes. She’s upbeat and determined. And she’s not the stereotypical blonde haired, blue eyed mystery protagonist we see all too often.

Goldie is also a heroine who doesn’t have to get physical to prove a point. She’s not a crime fighting superhero but a real-life detective who works things out instead. It’s a nice change of pace even for a lot of the all-ages books that are out there now that still often end up with someone punching the bad guys.

The writing is fantastic but it’s not just the writing that makes this a must read book. Brittney Williams’s artwork is fantastically charming. The character designs are great and capture each character’s unique personality. It’s an all-ages book so it takes on more of a cartoon-y look than some other books but that’s hardly to it’s detriment. Williams captures everything that makes this book great and the look and style really are one of the biggest draws for potential readers.

If you’re not reading Goldie Vance you should be.

Really the only thing that is wrong with this series is the fact that it’s currently slated to be so short. I highly recommend it!

A REVIEW COPY OF GOLDIE VANCE #1 WAS PROVIDED BY THE PUBLISHER IN EXCHANGE FOR A FAIR AND HONEST REVIEW. NERDOPHILES WAS IN NO WAY COMPENSATED FOR THIS REVIEW. OUR OPINIONS ARE OURS AND OURS ALONE.