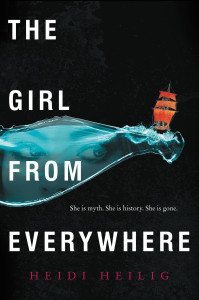 Heidi Heilig’s debut teen fantasy sweeps from modern-day New York City to nineteenth-century Hawaii to places of myth and legend. Sixteen-year-old Nix has sailed across the globe and through centuries aboard her time-traveling father’s ship. But when he gambles with her very existence, it all may be about to end. The Girl from Everywhere, the first of two books, will dazzle readers of Sabaa Tahir, Rae Carson, and Rachel Hartman.

Nix’s life began in Honolulu in 1868. Since then she has traveled to mythic Scandinavia, a land from the tales of One Thousand and One Nights, modern-day New York City, and many more places both real and imagined. As long as he has a map, Nix’s father can sail his ship, The Temptation, to any place, any time. But now he’s uncovered the one map he’s always sought — 1868 Honolulu, before Nix’s mother died in childbirth. Nix’s life — her entire existence — is at stake. No one knows what will happen if her father changes the past. It could erase Nix’s future, her dreams, her adventures… her connection with the charming Persian thief, Kash, who’s been part of their crew for two years. If Nix helps her father reunite with the love of his life, it will cost her her own.

In The Girl from Everywhere, Heidi Heilig blends fantasy, history, and a modern sensibility with witty, fast-paced dialogue, breathless adventure, and enchanting romance.

Author Heidi Heilig gave us her thoughts on the incorporation of diverse characters and importance of representation in her books as part of the Rockstar Book Tour for her new novel, The Girl From Everywhere.

I was born in Hawaii, melting pot of the Pacific. My father was Chinese, my first crush was Hawaiian, my classmates were Japanese and Filipino and Samoan, and my best friend in middle grade was Persian and Jewish. There were even a few white people in my life – my mom being one of them.

In short, there’s a good reason the anuenue — the rainbow — is a symbol of Hawaii.

Now don’t get me wrong—I’m definitely a proud SJW. But when I decided to write a book, it never occurred to me not to write a diverse cast. Characters of different races, abilities, genders, religions, and sexualities reflect my reality. And I was already set on a time traveling pirate ship so I needed to use some aspect of real life to keep me grounded!

So I wrote a hapa haole main character, and much of the book revolves around her struggle with her bipolar father. Of course, those aren’t the only two characters in the book (it’s hard to crew a sixty-foot sail boat with only two people.) And while I am both hapa and bipolar, I am not, say, a Na’ath woman from Sudan with a ghost wife, like first mate Bee. Nor am I a Persian thief from a mythical version of “Arabia” like Kashmir is. And I’m definitely not a white man who can time travel at the helm of a caravel!

The truth is, even if you aren’t lucky enough to grow up in a diverse environment (because indeed, top-down racism does keep a lot of America segregated) there are ways to expand your horizons. Reading diverse characters by marginalized authors can populate your imagination with friends of all creeds and colors. Tuning in to activists on Twitter and Tumblr can give you insight into experiences that aren’t just like yours. I’ll just admit this right now, I’ve had way more fun reading solid opinion pieces by multi-culti writers than I did ploughing through time travel theory (which tends to be fairly physics-heavy, unless it’s an all caps rant about aliens.)

But isn’t that the joy of books? Not aliens—I mean, yes, sometimes aliens. But more broadly, in books, we discover experiences beyond our own. We live many lives and walk in many footsteps. I think that of all people, book people get that. We readers know the joy of seeing the world through another set of eyes.

Heidi grew up in Hawaii where she rode horses and raised peacocks, and then she moved to New York City and grew up even more, as one tends to do. Her favorite thing, outside of writing, is travel, and she has haggled for rugs in Morocco, hiked the trails of the Ko’olau Valley, and huddled in a tent in Africa while lions roared in the dark.

She holds an MFA from New York University in Musical Theatre Writing, of all things, and she’s written books and lyrics for shows including The Time Travelers Convention, Under Construction, and The Hole. She lives in Brooklyn with her husband and their pet snake. They do not own a cat.

Click the banner above for the full tour schedule.