Angel Catbird is branching out into a new medium! The quirky series from the creative minds of Margaret Atwood and artist Johnnie Christmas takes on new life as an Audible Original audio drama. This audio adaptation features a full ensemble cast and spans the entire three volume series. 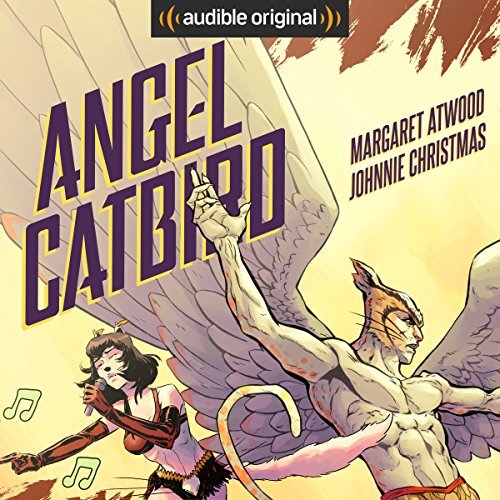 
Rating:
Originally published as a graphic novel series by Dark Horse Comics, Angel Catbird is branching out into a new medium! The quirky series from the creative minds of Margaret Atwood and artist Johnnie Christmas takes on new life as an Audible Original audio drama. This audio adaptation features a full ensemble cast and spans the entire three volume series. We’ve been following the series ever since we met up with Atwood and Christmas at San Diego Comic-Con a few years ago so we were super excited to see how this audio version played out!

If you haven’t read the original comics, the books tell the story of a young scientist named Strig Feleedus who finds himself inadvertently morphed into the titular Angel Catbird after a tragic accident involving his cat, a wayward owl, and a DNA morphing serum. Strig finds himself dragged into a life-or-death conflict between the half-cats living in the city and an evil half-rat named Professor Muroid who has some really questionable personal and professional goals. I mean, the guy wants to not just wipe out half-cat-kind but also turn his beloved lab rats into half-rat women solely for his personal pleasure.

Strig joins forces with his former co-worker, Cate Leone, who also happens to be a half-cat as well as a cast of kooky cat characters to take on Muroid. He also uses his bird side to bridge a gap between cat-kind and bird-kind to help them join forces against a common enemy. When I say the characters are kooky, I mean it. They range from Count Catula (a Dracula-inspired half-feline) to Atheen-Owl (A half-owl descended from the goddess Athena) to hacktivist mice, ancient Egyptian goddesses, and more.

Plus there are cat-related puns galore!

Now, I was admittedly not the biggest fan of the comics so I was really surprised at how much I enjoyed the Audible adaptation. This particular version does a fantastic job of capturing all the special quirks of the original comics while also appealing to a very different type of audience. I had always thought the story was a little out there even for comics but this audio version changed my entire opinion of the series.

Part of the reason that I enjoyed it so much is that Angel Catbird sets it’s silly tone immediately once you boot up the audiobook on Audible. You’re greeted with a ridiculous superhero-inspired theme song about Angel Catbird’s quest to save cats and birds and his unique abilities. It’s not the only jingle throughout as there are songs, jingles, and advertisements sung throughout. This was probably the coolest part of the whole audio drama. They really pulled you into the story. From Cate singing as part of a nightclub routine to Cats and Birds PSAs it was just a really cool addition that I wasn’t actually expecting.

Speaking of public services announcements, a big part of the original comics was a partnership with animal advocacy groups in Canada — namely Cats and Birds, an initiative through Nature Canada that focuses on the treatment of cats and birds and the harm cats can cause to bird populations. In the original comics there are a number of factoids provided by the organization placed throughout to educate readers. That partnership continues in the audio version which I thought was very cool. Though, admittedly, if you aren’t familiar with the comics the inclusion of various ads may seem a bit confusing. (They do, however, help explain why one of Professor Meroid’s villainous friends is called Santa DeClaws.)

Angel Catbird is Margaret Atwood’s first original audio adaptation and it intentionally evokes the feel of old school audio dramas and plays that may have aired in the 1950s. The story has always had a pulp/noire sort of pedigree that blended itself well (and weirdly) with some more classic horror elements among other mixed in genres. But that part of the series really shines in this audio adaptation. The added in soundtrack, fun jingles, perfectly placed sound effects, and great cast performances really make everything seem so awesome.

I mean, the cast really does a phenomenal job pulling this project together.

Everyone from Strig Feleedus to Count Catula to Strig’s cat Schrödinger finds their voice. The strongest performances come from the voice actors bringing Strig and Cate to life. They did a really great job not just on their own but together. There was a lot of cheesy, corny dialogue (because this is just this kind of story) but they made it believable and they two characters played off one another well.

The actor voicing Professor Meroid really deserves some real credit, though. Meroid can’t have been an easy character to bring to life but the voice he found was perfect for the character. He seems to take his cue from some of Mark Hamill’s more devious voice over roles which is not a bad thing at all! But I think my favorite performance was probably that of the narrator. He was the perfect companion to the reader, offering that old-timey narration mixed with a good dose of modern humor.

Now, that said, we can hardly pass up the chance to note that Margaret Atwood herself made a cameo — see if you can recognize as who!

As someone who is picky about audiobooks and narrators in general, I have to say I really enjoyed Angel Catbird. The cast was great and the dialogue, music, and everything else were very clear and well produced. The dialogue was a bit corny at times but if you’re familiar with the source material and the audio drama feel that they’re going with that’s hardly a bad thing. That said, the actual story goes a little off the rails for me at times. But I loved the performers and I think they really brought this story to life. I enjoyed this audio version of the story more than the original comic (though I’m sad listeners will miss out on Johnnie Christmas’s artwork).

If you like full-cast audio adaptations and think you’d love a good, kooky story about cats, birds, half-cats, half-birds, and rat-kind’s attempt at world domination then you can’t go wrong with Angel Catbird from Audible. And if you’re already familiar with and enjoyed the Angel Catbird comics then you definitely want to check it out! (If you haven’t already used your free trial on Audible, it’s as good a time as any.) You can listen to a clip from the audio drama below!