“Deadpool” Is Big, Bold, And Sure To Leave You Satisfied 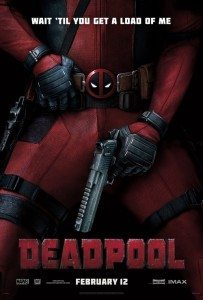 The opening credits sequence of Deadpool follows the frozen-in-time-slow-pan format that have suddenly become cliche within the superhero genre, showing Deadpool fighting a carload of enemies. But instead of highlighting his impressive abilities or cool demeanor, it shows him shoving his crotch into one baddie’s mouth while holding another by his underwear, not to mention a quick shot of a cover of People Magazine delcaring Ryan Reynolds the “Sexiest Man Alive.”

I’ll say this right off the bat: if you’re already a fan of the comics and you’ve been waiting for this movie ever since it was initially announced way back in 2004, Deadpool is everything you want it to be. It’s crass, quick-witted, brutally violent, and utterly ridiculous. Ryan Reynolds delivers a pitch perfect rendition of the “merc with a mouth,” clearly putting a lot of care and energy into this obnoxious goofball; his physical humor kills, he emotes a remarkable amount underneath his mask, and he’s so accurate to the comics that you almost forget X-Men Origins ever happened. The film blends its comedy and action such that both feel inspired and unfiltered, never letting up on either for very long from start to finish. So yeah, it’s a total blast. I’m sure a few other editors here at Nerdophiles wouldn’t hesitate to give it the full 5 stars.

But for the vast majority of the folks who will see this film, who have a vague or no idea of what Deadpool is, I’m not so sure. This could have been the perfect venue for one of these films to break from the tonally unfocused superhero film trend that has run the genre into the ground in recent years, but the differences mostly lie at the surface level, with the working parts beneath less subversive or even effective — the plot is predictable, the villain is one dimensional, and the pacing is uneven.

The jokes themselves come at a mile-a-minute rate to the point of inundation, and while most of them land, they usually amount to little more than silly wordplay and dick humor. And since the movie never properly establishes Deadpool’s mental instability and plot armor self-awareness, he doesn’t make much sense as a character, nor do his constant fourth wall breaks. It’s fun, yes, but it feels like cheap fun.

Ryan Reynolds stars as Wade Wilson, a high profile mercenary who falls in love with lady-of-the-night Vanessa Carlysle (Morena Baccarin). Soon after, Wade finds out he has terminal cancer, but a mysterious agent appears to offer him a deal: they can heal his cancer and give him super powers in the process. Wade agrees, and thus winds up in the hands of Ajax (Ed Skrein), who tortures him to no end as a method to bring out latent mutant genes. Wade does develop superhuman healing abilities, but becomes horribly disfigured as well. After he escapes from the facility, he resolves to find Ajax and force him to fix his skin.

This all comes with a healthy dose of quirky one-liners, direct addresses to the audience, self-aware nods to other Marvel movies, and a whole lot more profanity than you’ll hear in any Fant4stic movie. The cast rounds out with Colossus (Stefan Kapičić), who has far more personality than in any of his previous appearances; Negasonic Teenage Warhead (Brianna Hildebrand), a strong character with a strong performance in too small of a role; and Angel Dust (Gina Carano), an additional villain with almost nothing to say, seemingly only here as another pair of fists (and tits).

In fact, it’s not entirely clear why anyone’s here — Colossus’s comments about trying to convince Deadpool to join the X-Men don’t hold up to much scrutiny, and Ajax gives no real reason why he cares about killing Deadpool as much as Deadpool cares about killing him. But they come together for some tight and dynamic fight sequences, with their small moments as impressive and hilarious as their large ones.

Most importantly, first-time director Tim Miller manages to nail the tone of the film, blending decapitations and full frontal nudity with dopey puns and Adventure Time references such that they all feel like they fit together. And while Deadpool’s deeply unorthodox personality never gets any real explanation, his equally sadistic and cartoonish behavior makes him one of the most intriguing and enjoyable protagonists in a superhero movie since the first Iron Man. So look at Deadpool the same way Deadpool looks at himself: when everything’s fucked up, you might as well have a good time.

Final Thoughts: Deadpool‘s intensely R-rated take on the superhero genre isn’t as functional as it should be or as original as it thinks it is, but it does deliver plenty of hilarious dirty humor and thrilling action.