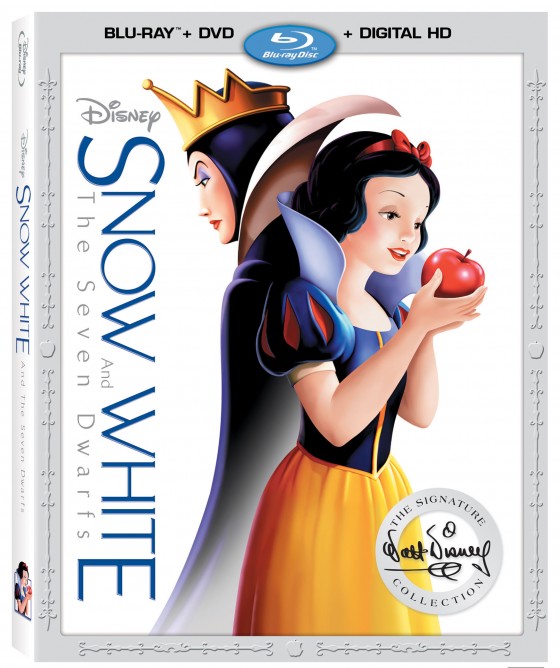 With this year’s re-release of Snow White and the Seven Dwarfs we say goodbye to the Diamond Edition series of Disney classics and welcome the brand-new Signature Collection. Moving away from precious metals and gems, the Signature Collection features Walt Disney’s iconic penmanship on the cover as it’s distinguishing detail.

While this obviously isn’t the first time Snow White and the Seven Dwarfs has been released, it is the first time it has been released on digital HD. And interestingly, this is the first line of releases that will not be released on standalone DVD. If you’re picking up the Signature Collection you’re getting the blu-ray, DVD, and the digital HD copy. Personally, I think that’s awesome. If you’re not already redeeming digital copies on Disney Movies Anywhere and cashing in your Disney Rewards points you’re missing out!

So, let’s talk a little more about this release.

Without getting into how great Snow White and the Seven Dwarfs is and how awesome of a movie it is and always will be, this really is a pretty solid release. It’s really well put together and the menus are easily navigable. It looks great. The opening animation on the home screen in particular is adorable. It features a paint brush sweeping across a blank canvas with each new stroke showing a new scene from the movie. I hope that this becomes a theme with the Signature Collection releases. I can imagine the scenes they’d use for Beauty and the Beast and the Lion King already!

Having never owned any version of Snow White and the Seven Dwarfs beyond the old school VHS version, I was super excited to watch through everything.

So here are the special features included in the Signature Collection release.

This is one of the more modern featurettes and it’s pretty cool. Disney brought in three different creators – a Disney animator who works in papercraft (who has an awesome featurette on the Maleficent blu-ray that you should check out),  a LEGO brick artists, and the Disney Bound blog founder. They are all tasked with creating something inspired by Snow White. The idea is to point out what makes the film so iconic and to build up on all of that. It’s really cool to see what they put together!

The Fairest Facts of Them All: 7 Things You May Not Know About Snow White and the Seven Dwarfs

Sophia Carson from the Disney Channel’s The Descendants guides viewers through a series of trivia about the movie. It’s kind of fun and while a lot of the other special features are going to be better for older viewers, this is one that’s geared towards the kids. While it’s fun, it’s not the greatest featurette and it’ll date itself pretty quickly. Plus it takes the opportunity to plug newer films like Zootopia which hasn’t even been released yet so… yeah. But it goes through some cool stuff like the fact that the witch’s voice actor actually took her teeth out to perfect her lines and the origins of Dopey’s name and his unique gait!

Disney’s First Feature: The Making of Snow White and the Seven Dwarfs

This is the best feature on this release. It’s amazing. It goes through the full history of Snow White and the Seven Dwarfs and truly highlights the importance of the movie not just for Disney history but for the history of film generally. Historians and Disney creators go through all the trials and tribulations that went along with the creation of this groundbreaking movie. It’s truly amazing to see how everything came together and to learn more about the people who were involved in the process.

You hear not just about the movie itself, but how hard it was to get the money together to fund the film and how they had to work to come up with ways to tell the story in ways that no one had ever tried before. These people were literally making history without even knowing it. Seriously, if you watch just one feature on this blu-ray this is the one. It’s not even just about Snow White, either. It’s about the early days of Disney, too. This is essentially just a short documentary on everything you could want to know about the making of Snow White and the Seven Dwarfs and then some. It’s perfect. (And long!)

In Walt’s Words: Snow White and the Seven Dwarfs

There’s nothing quite like a master explaining his craft and In Walt’s Words gives you the chance to hear Walt Disney talk about creating Snow White and the Seven Dwarfs. From the original inception to dealing with the press’s skepticism to pulling it all together, these original recordings of Walt Disney give you true insight into the creative genius at work. As Walt himself says, “Hollywood has never been able to figure us out.” But it’s kind of cool to hear him explain it all.

This featurette talks about some of the key animators behind Snow White and their histories. They talk about iconic figures like Fred Moore, Norm Ferguson, Art Babbitt, and more. Historians, current Disney creators, and former employees – and the artists themselves – through archival records talk about these people, their impact on Snow White, their lasting influences, and how their legacies still shape Disney animation today.

Okay, so, these were unexpectedly some of the coolest special features on this disc. It turns out that Walt Disney hired a bunch of stenographers to transcribe story meetings his animators and writers held. These meetings were where the magic really happened. They brainstormed and walked through different scenes. They came up with new ideas and bounced things off of one another. These would be awesome to read. But they take it further by bringing in people to read the parts of the various people involved in the creation of Snow White to read from the actual transcripts walking them through sessions discussing the dwarfs and the Huntsman. Very cool.

A largely black and white featurette, the studio tour pulls together archival footage and audio of the folks who pioneered animated feature films. You get to hear people talk about what it was like to work for and with Walt Disney in those early days and the culture that built up around Walt Disney. Other special features on other movie releases – new and old – always highlight the very special corporate culture at Disney. And this featurette really gives you a good idea about how that all came about. Plus you learn a lot about the animators and get to hear some great stories about Walt Disney – all in their own words!

Hosted by Disney’s Don Hahn – the producer of Beauty and the Beast and The Lion King – this featurette goes into some of the more technical aspects of animation. Exposure sheets were effectively a way to communicate what’s going on to everyone involved creating the scenes in Snow White. There were lines on ex-sheets that matched up to the individual frame. These in turn matched up to dialogue, camera notes, and other things that allowed everyone to literally be on the same page for each scene. Another fun fact? There were around 1300 sheets involved in Snow White! Crazy.

Originally included on the diamond edition, Snow White Returns explores a recent discovery in the Disney vaults. Story sketches with the title ‘Snow White Returns’ were found in the archives, leading people to speculate as to their purpose. Some of the scenes were remnants that were ultimately cut from the final film such as the Soup Eating sequence and bed building sequence, which are included in full on the disc as well. There’s been speculation that ‘Snow White Returns’ was perhaps intended to be a short which would have been an interesting precursor to the sequel shorts for movies like Frozen and Tangled! But, alas, it never saw the light of day.

There are a few other special features included, too. Some of them are what you would come to expect. There’s an audio commentary and a series of deleted and alternate scenes that didn’t make it into the final cut of Snow White and the Seven Dwarfs.

Then there are some other, shorter featurettes like @DisneyAnimation: Designing Disney’s First Princess, which explores the design process and the people behind the varoius characters in Snow White and Snow White in Seventy Seconds, which is basically just a short rap outlining the whole plot of the movie. (I don’t know why we needed a rap but I think the girl that does it may be a Disney Channel star so that probably explains why it was included.) Lastly, Animation Voice Talent is an older featurette focusing on the voice casting for Snow White, that is no less interesting than the newer ones – you’ll just have to forgive it the old school full screen formatting.

I highly recommend watching through as many as you can!

Honestly, just watch everything. I did!

And I did that because I really like the feel of the Signature Collection. While some things – especially some of the newer special features – feel a little childish this new series as a whole feels like it’s really showcasing Disney’s greats. I can’t wait for the next films to release!

A REVIEW COPY OF THE SNOW WHITE AND THE SEVEN DWARFS SIGNATURE COLLECTION BLU-RAY COMBO PACK WAS PROVIDED BY THE DISNEY AND FINGERPAINT MARKETING IN EXCHANGE FOR A FAIR AND HONEST REVIEW. NERDOPHILES WAS IN NO WAY COMPENSATED FOR THIS REVIEW. OUR OPINIONS ARE OURS AND OURS ALONE.