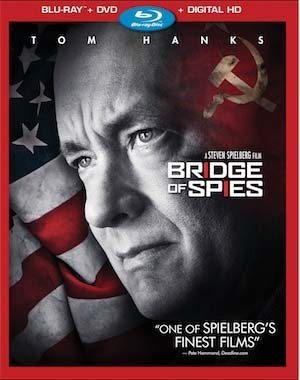 Bridge of Spies is a fascinating movie, from the first few seconds I was hooked. This shouldn’t come as any sort of surprise to people who know me. Legal dramas are some of my favorites – especially ones that stand on high moral principle. Plus, I’m a total sucker for period dramas with a lot of heart and Bridge of Spies has that in spades. So when I say I love this movie, I really do.

I’m not the only one, either. The movie has been nominated for a slew of awards and was named as one of AFI’s Top 10 Films of the Year. And it really does deserve every nomination and award it receives. It’s one of the best dramas I’ve seen in a long time.

Set during the Cold War, Bridge of Spies examines a little piece of history most people probably never knew about before Steven Spielberg and Tom Hanks embraced it.

Sure, we all know about the U-2 Incident where an American spy plane was shot down by Soviet forces. Instead of self destructing, the pilot was unable to destroy the ship and ended up being captured himself in what became a huge political scandal. But this is only a part of the story Bridge of Spies tells. In fact, it’s not even really the biggest part. It’s not the U-2 spy plane or the pilot who take center stage.

Instead, it’s Tom Hanks’s character James Donovan, an insurance lawyer from Brooklyn. His story starts some time prior when he’s pegged to represent a man accused of being a Soviet spy at trial. While he might think that’s the end of things he finds himself wrapped up in things and pressed by the United States government to ultimately broker and exchange of prisoners – their Soviet spy for the captured pilot, Francis Gary Powers. SPOILER ALERT! for historical facts here, but, the movie takes it’s name from the climactic exchange which takes place on Glienicke Bridge in Berlin. The actual nickname for the place is the ‘Bridge of Spies’ after these historical events unfold.

I’ve watched this movie a couple of times now and it’s just such a satisfying blend of history, acting, and ambiance. The way the film can so seamlessly flow from legal drama to spy thriller says a lot about about both the story, the film itself, and the direction. It’s enthralling. You need to know what happens next and you need to experience it in the moment – even though you could technically hop on Wikipedia and find out what ends up happening.

And the cast is great.

Tom Hanks is absolutely perfect in this film. I really cannot overstate how much I enjoyed his performance. But if I’m being honest it’s hard to pick a favorite among the wide cast of actors and characters. Everyone plays their parts so well and the casting is phenomenal. Everyone really owned their character – though no one seemed to be quite as amazing as Mark Rylance, who stole the show every moment Rudolf Abel was on screen.

I enjoyed the movie a lot and so I was really looking forward to the special features that were included. As much as I like seeing Steven Spielberg’s interpretation of history, I was really hoping to get some more information on the actual events that inspired this film.

A Case of the Cold War: Bridge of Spies

For example, this first featurette tries to really paint a picture to show viewers what it was like to grow up at the height of the Cold War. It provides both historical and anecdotal context. The fact of the matter is that a lot of viewers won’t remember what it was like to live in that world. I myself was only three years old when the USSR fell apart.

A Case of the Cold War features the older filmmakers and actors explaining what it was like to grow up then. It also features Francis Gary Powers, Jr. – the son of the real Francis Gary Powers – and the real Frederic Pryor (whose story is also featured in the film) talking about the actual, real life events. And it goes more in depth in explaining how they came across these stories in the first place. It’s interesting and I think it really helps sort of set the stage for the rest of the special features.

A lot of the people involved in making this movie were not only alive during the Cold War but lived through very different experiences. The film’s director of photography actually grew up in Eastern Europe, as did many of the crew and consultants. In trying to make this movie feel authentic, a lot of people wound up pulling from their own experiences. And they share a lot of those experiences with viewers.

One woman was a teacher who passed updates to family members and children stranded on the opposite sides of the wall.  Frederic Pryor talks about the wall going up and and how no one knew what was going on. Actually filmed parts of the movie during the 25th anniversary of the wall falling. They talk about living those moments and then trying to find ways to bring them to life and finding the right places in Eastern Europe to film in to make things look and feel authentic.

And they do a fantastic job of it in the end. Seriously, the people who picked the filming locations deserve an award all their own for this one. Everything looks and feels like Cold War Eastern Europe. It’s like they some how transported everyone back to the 1960s just for this film.

In their attempts to keep things authentic, the folks behind Bridge of Spies actually reached out to the Department of Defense who hooked them up with the people at Beale Air Force Base in California. Beale Air Force Base is the home of the current U-2 bomber operations and they actually used a real U-2 plane from the 1980s as a stand in for their plane in the movie. This is a neat little featurette that talks a bit about the history of the U-2 spy plane and it’s missions. There’s even some actual archival audio recordings of the actual Francis Gary Powers speaking about what had happened during the crash!

Spy Swap: Looking Back on the Final Act

One of the more profound special features, Spy Swap takes a look at the final scene in the movie not just from a filming perspective but from a historical one as well. The final exchange on the Bridge of Spies was actually filmed on the real Glienicke Bridge where the events them were depicting actually happened.

The cast and the filmmakers talk about how incredibly moving it all was for them while Francis Gary Powers, Jr. and Frederic Pryor provide some historical context. It’s a really cool piece that I highly recommend watching if just to see how much that moment meant both in reality and for the film.

Really, I just highly recommend Bridge of Spies in general.

Even though it focuses on some pretty heavy subject matter it never loses hope. It has it’s moments of levity as well as it’s moments of uncertainty and suspense. You come to feel for the characters – even the ones that you might have previously pegged for the bad guys. It takes a very tense moment in history and helps to put a human face on things.

Really it’s just an incredibly strong film that begs to be watched.

If nothing else, watch it because it’s been pegged for a few ‘Best Picture’ awards and then you can make your own decision on whether or not it deserves it. (I would obviously say yes but I’ve already made my opinion known.) You can pick up Bridge of Spies in stores today – February 2, 2016!

A REVIEW COPY OF THE BRIDGE OF SPIES BLU-RAY COMBO PACK WAS PROVIDED BY DISNEY AND FINGERPAINT MARKETING IN EXCHANGE FOR A FAIR AND HONEST REVIEW. NERDOPHILES WAS IN NO WAY COMPENSATED FOR THIS REVIEW. OUR OPINIONS ARE OURS AND OURS ALONE.