“Creed” is The Rocky Movie For The Millenials Generation 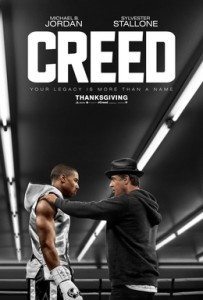 It’s hard to imagine a world where Sylvester Stallone’s Rocky Balboa isn’t the champion in the ring anymore. However, Ryan Coogler’s fresh new take on the Rocky franchise brings a new champion into the forefront. Picking up the story with the young Adonis Creed, the lovechild of former world champion Apollo Creed, we are thrown back to the past as Creed utilizes all of the things that we loved about the first original Rocky to create a new movie for a new generation.

Raised in group homes and thrown around in juvie, Donnie is adopted by Apollo’s wife and raised as her son as he grows up with the passion to fight. While the essential plot of Creed reads similar to a blueprint from Rocky, Donnie is a different protagonist all together.

Quite perfectly, he is the Rocky for the millennials. And as a millennial who grew up loving watching and adoring Rocky, this isn’t a bad thing at all. The Rocky Balboa of the 1970’s was a leg-breaking endearingly dim-witted thug living in a bad part of Philly fighting for scraps and trying to live the American dream. This was their underdog story and one that paved the way for nearly all following underdog tales (as well as movies with killer montages).

But, in a new generation, new stories can be created, because there are still underdogs. As the first story of the franchise to come to fruition without Stallone at the writing helm, the story takes a change and it revitalizes. After being adopted by Apollo’s wife, Mary Anne, Donnie is raised in a privileged household and finds himself in a good job, from which he has just received a promotion, but feels unfulfilled.

As any college graduate might tell you today, this is a recurring theme. The idea that you aspire to more, but the fear of failure or the fear of shame or the fear of loss leads you to feel crushed by the weight of your own dreams as well as your own livelihood. Donnie isn’t struggling to make ends meet, but he’s struggling between the two lives that he forces himself to live. One that where he works at his financial bank job and keeps his mother happy, and another where he fights and chases after a dream while being haunted by his father’s ghost.

It’s Donnie’s own story, the chip on his shoulder, that allows him room to play off of Stallone’s Rocky. Donnie’s relationship with his “uncle” Rocky quite literally brings Rocky back to life while helps Donnie to not only fulfill his dream but to reconcile the feelings he has within him for his father.

Michael B. Jordan’s Adonis Creed is packed full of personality and life. A lot of Donnie’s story matches Rocky’s own, including the final fight between he and Conlan that goes all twelve rounds with the two fighters matching each other as equals. But what is beautiful about Creed isn’t just the action and the beauty of the sport, which is shot very beautifully, but Donnie’s relationship with Rocky.

Creed pulls on the heartstrings as it draws forth Rocky’s own fears and insecurities as well as his desire to see Donnie succeed. Coming from 1976 with Rocky Balboa strolling down the streets of Philly and roughing up guys for a loan shark to training Apollo Creed’s son in 2015 is a long journey. For those of us who have walked with him, it’s an emotional one as well, but for those who are being introduced to Rocky for the first time through Creed have a perfect introduction.

Final Words: The Rocky franchise earns an emotional revival as it gives birth to a new fighter in Adonis Creed. Stallone shines once again as the dearly loved Rocky Balboa and hands over the gloves to Michael B. Jordan’s Adonis Creed.