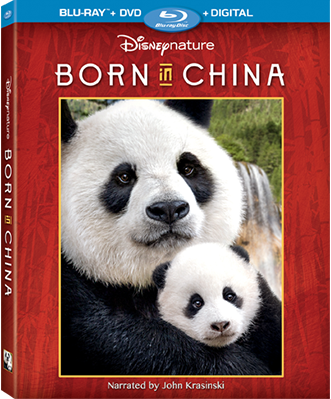 Born in China is the first of the Disneynature documentaries that I’ve watched and it’s an unexpectedly emotional film. It follows a series of animal families across China, including snow leopards, golden snub-nose monkeys, chiru antelope, and (of course) pandas. The story anthropomorphizes the animals to an extent, which is to be expected. Some of them are given names and the film talks about love and loss through the frame of human emotion.

The story is framed by the seasons. Each family is revisited throughout the course of what would seem to be a calendar year. This gives viewers a chance to see these families dealing with a number of natural challenges – from weather to predators to competitors within their own species and more.

There are four primary ‘characters’ so to speak.

The first we’re introduced to is Dawa, a female snow leopard trying to provide for her two cubs. They live high in the mountains and there seems to be danger at every turn. Her story is perhaps the most moving in the film because the stakes are highest. Despite being the only predator featured, Dawa is constantly competing with other snow leopards for prey and things don’t always go well for her. Her story offers a harsher contrast to the other three, which tend to be happier in a sense.

Tao Tao, for example, is portrayed as a rebellious teenager who strikes out from his family of golden snub-nosed monkeys. He’s jealous of his baby sister and joins a band of young males who cause all kinds of trouble. Sure, there is a predatory threat that is featured multiple times in his story, but for the most part things work out for the young monkey.

The most adorable story is probably the one about Ya Ya and her baby Mei Mei. These are the two pandas featured on the blu-ray cover. Ya Ya is portrayed as an overprotective mother while Mei Mei is an adventurous youngster. Born in China starts following Mei Mei when she’s very young and sees her learn to explore her environment from barely crawling to scaling trees on her own.

The last ‘character’ isn’t an individual animal but a herd of chiru antelope. I hate to say it but they’re the most boring part of the story. Save for a quick brush with wolves, there’s not much excitement to their part of the film. We see the females to give birth and then later return to rejoin the males. There’s no individual ‘character development’ among the heard, though they do discuss some of the basic characteristics of the species and the challenges they face. They’re not even included as a ‘family’ on the blu-ray cover which, on the back, describes following three animal families – not four.

The film also briefly features some other animals like cranes, red pandas, hawks, and more.

The story doesn’t end with the last scene of the documentary, either. The credits are interspersed with additional video of the animals they followed, other animals, and the crew that filmed the documentary. It also includes some cute footage of the monkeys messing with the cameras, as well as other animals checking out the various stationary cameras used in the documentary’s production.

I do want to say that it’s not always a happy film, however.

I don’t mean to spoil anything but Born in China doesn’t shy away from the harsh realities of the wild world. One of the opening lines talks about the symbolism of cranes carrying the spirits of animals into the next world and the cycle of life and death that follows animals in the wild becomes a major theme – especially at the end of the film.

My only real complaint has to do with this release and not the film itself. It was a little disappointing that there was no Chinese audio option for the film, especially considering the film had a fully narrated Chinese release. There’s no subtitled option either.

I understand that in the local market they tend to focus on English, French, and Spanish, but I think it would have been worth it to include a Chinese option. Especially considering the subject material, the fact that a Chinese version already exists, and the involvement of Shanghai Media Group in the film’s production.

Each of the animal families in this film gets its own, dedicated special feature that focuses on the making-of their particular portions of the documentary. Well, except for the chiru. I found that interesting because even the filmmakers seem to agree that they were the least interesting part of the film. But the pandas, monkeys, and snow leopards get their own featurette – as do the cranes, whose story is used to book end the documentary’s events.

This special feature discusses difficulty of filming this portion of the documentary. Apparently finding a wild panda family was quite the feat as there are barely 1800 wild pandas in the country. Jacky Poon was the guy responsible for finding the pandas and after about a month he finally leads the team in locating Ya Ya and Mei Mei.

Of course, there were a lot of challenges to overcome and even once they started filming the still had to, you know, wear panda suits the whole time. Don’t worry – it’s all explained in the featurette!

One of the other challenges in making Born in China was filming in the cold winter months. While this is a challenge faced by the snow leopard team year-round, the team covering the golden snub-nosed monkeys at least only had to face the cold for one season.

Still, it was super cold and the weather impeded their ability to get the footage they needed. Namely, they were looking to catch the monkeys in the act as they walked and ran bipedal to avoid putting all four of their paws down in the cold snow. Like all of the special features, it’s definitely worth watching.

Before you watch “Masters of Camouflage” you should know that it’s just a brief look at what it took to film a snow leopard family in the wild. It turns out that Disneynature’s teams captured the first footage of snow leopard cubs in the wild, which was no small feat.

Finding adults and filming them is hard enough with the challenges that come with filming at such a high altitude. It took the team three months to find them and that’s only the beginning. So much went into filming these segments that Disneynature released a second documentary “Ghost of the Mountains”, which is actually longer than Born in China.

Unfortunately, from other reviews it looks like that documentary doesn’t follow them to the end of filming, which I think denies the viewers and the crew themselves the kind of closure that such a documentary could have provided.I also think that after a digital-only release before the release of Born in China, it could have been included on this blu-ray release or in joint release of the two films. At the very least a digital copy could have been included with Born in China.

The last of the animal-centric special features, “Wading Through the Wetlands,” focuses on a family that ultimately didn’t receive much screen time. The cranes were used to book-end the documentary, so while their appearances are short they’re still important. This particular featurette focuses on the search for crane chicks in the nest. The crew has to battle weather and challenging marshlands to find them, but it’s a humbling experience for all involved.

The other special features on the disc include “Everything, Everything” music video from American Authors featuring scenes from the film and “disneynature: Get Involved, Get Inspired,” which is a short ‘thank you’ to the animals that inspired so many Disney movies and a call to viewers to help with Disney’s preservation efforts.

Some of the narration may seem a little silly and I wasn’t sure how I felt about the writing imposing human characteristics on certain animal ‘characters’ – particularly Tao Tao and the other monkeys. But overall, it’s a really good film that I think people will enjoy.

That said, you may want to shy away from Born in China if you’re not sure you want to face the harsher realities of life in the wild. You certainly shouldn’t go into this film expecting that all the animals live happily ever after. And if you aren’t sure you’d be able to handle that then you may want to skip this one. Or, at the very least, look up some spoilers ahead of time to prepare yourself.

Born in China is out today on blu-ray combo pack and digital HD!