The line-wide relaunch that is All-New All-Different Marvel is giving an interesting look at the way the company approaches its marquee characters and teams versus the way it takes on riskier characters and concepts. For their biggest characters, Marvel’s making marked, exciting changes but grounding those changes with fairly conservative creative teams, guaranteeing readers a fairly consistent product.

Their more exciting creative decisions are being made in smaller books, with out-of-nowhere writers getting paired with stylish, creative artists. Neither approach is necessarily better or worse than the other but both have the potential for interesting series.

All-New Wolverine #1 is certainly a case of the former. Tom Taylor seemingly came from nowhere four years ago as the writer of a tie-in book for Injustice: Gods Among Us, a comic that infuriated comics fans but proved to be one of the company’s hottest sellers on the digital and secondary market. Make no mistake, I thought Injustice was genuinely one of the worst comics on the market today but its success isn’t necessarily surprising. It was a book that played fast and loose with established continuity, killing off characters and changing the world at will, while grounding the whole series with a host of references and easter eggs that fans ate up. 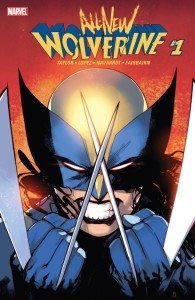 All-New Wolverine is the highest profile gig Taylor has gotten and it’s a solid premise to work with. Following Wolverine’s death, X-23, Laura Kinney, steps up into her surrogate father’s role, donning the yellow and blue spandex. There’s not a lot of plot in the debut issue. She’s in Paris battling a masked terrorist group (yes, this is an issue that might play roughly for some after Friday’s events) but the issue’s meat is grounded in interesting things about the character.

See, X-23 was a character who overcame a very limited premise to become more. After being a fairly fan-service focused character in her first series, she’s become a rounder character, one with real fears of becoming a killer. Her development has been parallel to Logan’s, both killers trying to go straight with Logan knowing the difficulty that staying a hero can entail.

It interesting in one scene in this issue to see Laura picture herself back with Logan when they were in X-Force together, Cyclops’ covert kill-squad which saw both Logan and Laura cross moral and ethical lines for difficult causes. It’s an oblique scene that many won’t recognize all the intricacies of but it speaks volumes to the way Laura continues to see herself as a weapon, as a killer rather than a person. It also helps to give real weight to Logan’s line, “You’re the best you are at what you do. But that doesn’t mean you have to do it.”

All New Wolverine #1 ends acknowledging that struggling against your violent impulses is a difficult road, and one that http://humanrightsfilmnetwork.org/celexa Laura is going to be fighting throughout the series and even with as little plot as there is here, it’s one of the best hooks one of Marvel’s books has offered in a while. Those who’ve always liked Wolverine, particularly his shift in becoming an aspirational and inspirational figure in the last few years, are going to get a real thrill out of this issue and fans of X-23 are going to get even more out of this issue, one of the best debuts of ANAD Marvel. 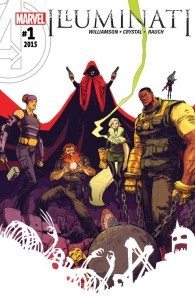 Here, Titania is out of prison and trying to make a legitimate life for herself in preparation for Absorbing Man getting out of jail, but it seems as if the world has other plans. She has a super villain ankle-monitor, is getting checked in on by She-Hulk, and is seen by everyone around her as just another would-be super villain waiting to explode. When she does, it feels like a failure not only for her but to the audience.

We know things are tough for her and both Williamson and Crystal do a  great job humanizing Titania and making her struggle feel human and relatable, not necessarily super heroic. Titania’s fall is caught by The Hood, a villain not seen in Marvel comics for several years who’s looking to come back in a big way by reestablishing himself with a new crew of criminals and killers. He wants Titania to be a part of it although the issue’s final pages reveal that he may have even more sinister motives at play.

Illuminati is going to get compared to other recent villain comics like the great Superior Foes of Spider-Man, Snake Eyes: Agent of Cobra and Suicide Squad but it doesn’t quite reach the level of those comics. Once The Hood arrives in the story, much of the tragedy of the first half of Illuminati #1 is flattened in favor of something a little duller and more blatantly villainous.

Even at his best, The Hood has always been kind of a mustasche twirling villain and even here, he’s just not all that interesting to follow. There’s some interesting subtext about the way minor villains are often killed to characterize heroes but it’s an analysis that doesn’t really bear much weight or feel that worthy of analysis. Still the art and moments of tragedy are strong enough to almost feel like it’s worth trying at least a couple more issues of this talk of villains gloriously being bad.