American Pastoral is an Emotional Evisceration 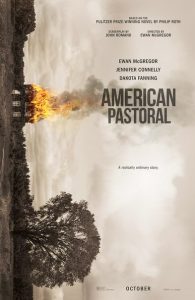 American Pastoral is “a radically, ordinary story.” Or so the poster claims. This film, the directing debut of Obi-Wan himself, who stars as Seymour ‘Swede’ Levov, the prototypical High School Hero of 1940’s New Jersey who marry’s his gal, has a daughter, takes over the family business. The ordinary story.

The radical steps in when in the 60’s set up of course his daughter Merry, played by Dakota Fanning, joins the anti-war movement and begins to move even further into revolution. Based on the 1997 novel by Philip Roth.

This review is probably going to come out looking like a lot of nonsense as I parse through my thoughts, having just seen the film before writing. In short, this movie is something. Something I recommend seeing, knowing that I myself won’t go through the ringer of experience again for awhile yet. The movie explores the themes of…. everything it feels like.

Life distilled, for better and mostly worse, into it’s sub-two hour run time.  The movie is told through a framing device of a school reunion (which may be one of the clunkier parts of the film) that Nathan Zuckermann (Roth stand-in) is attending. Levov was older than Zuckermann and the man sees a shrine to the Swede in the halls, remembering fondly on what was.

The story then unfolds as Swede’s younger brother relates the details of his later life. The first third builds your heart, let’s you believe in this community hero and how perfect he was, surely how perfect his life would be. The living demigod Swede Levov, the screen itself almost seems gilded while discussing his backstory and early years.

But then the story turns, from beautiful moments with family to the difficulties of life as revolution takes Merry’s heart and leads onto a path of violent action and flight. If the first chunk was all about swelling your heart, the next hour and change of the movie is all slowly pulling your guts out from you as you watch Ewan McGregor grapple with his inability to let go of his daughter and in doing so cannot seem to hold on to his wife.

And the real hurt is, who can blame him? He’s not making an obvious error that even the blind can see. He’s between a rock and hard place, following his heart in both goals but cannot attain either. And in that struggle it really is an ordinary story. It is the stuff of life, leading to a conclusion in which we don’t even see what specifically happens to The Swede in the end, just that he wasn’t able to let go. That his passing wasn’t the importance of his life, but his unending love for his daughter.

Having not read the book, I cannot attest to how faithful an adaption it is or if it even is good comparatively. I know the film tackles about the first half of the book, that it continues on to detail Zuckerman’s attempts to trace Levov’s life, but none of that is shown here.

The movie while good, does have a couple problems. During a scene in which Swede investigates his daughters room the emotional shorthand of Buffalo Springfield’s “For What It’s Worth” starts playing, a song that should probably never be included in future 60’s movies.

The framing device is clunky since the full use of it in the novel is not transplanted here.  The news footage interspersed throughout the film also is a fair reminder to folks of today who think America is getting worse and worse once went through a time in which civil unrest was real, riots with police and army intervention occurred, and over 4000 bombs went off across the country. America has always been a place in flux, and even that ideal of what once was, wasn’t as neat and perfect as memory would have you believe.