One of the most impressive things about the first Star Wars film is how thoroughly it establishes its characters in just two hours. Luke is a would-be-hotshot, more full of self-confidence than skill and he’s shaken by the man everyone seems to think he is capable of being. Leia is a stately diplomat but her soft exterior masks a hard-as-nails toughness, a woman unafraid to stand up to the Empire’s deadliest agents or grab a blaster and open-fire. Han’s a rogue who fashions himself a scoundrel, something of a schmuck who’s just barely keeping his head above water with a quick lie, an itchy trigger finger and the fastest ship in the galaxy. Even the droids, C-3PO and R2-D2, are fully established, one a prissy coward, the other a spunky, almost child-like wanna-be-hero. Really, Chewbacca’s the only one who is left out. He’s not quite comic relief, not quite a tough guy, not quite the cute soon-to-be toy that George Lucas would create by the end of the original trilogy. He ends up as mostly a relic of Lucas’ original draft for the film, and a notably uncharacterized one. 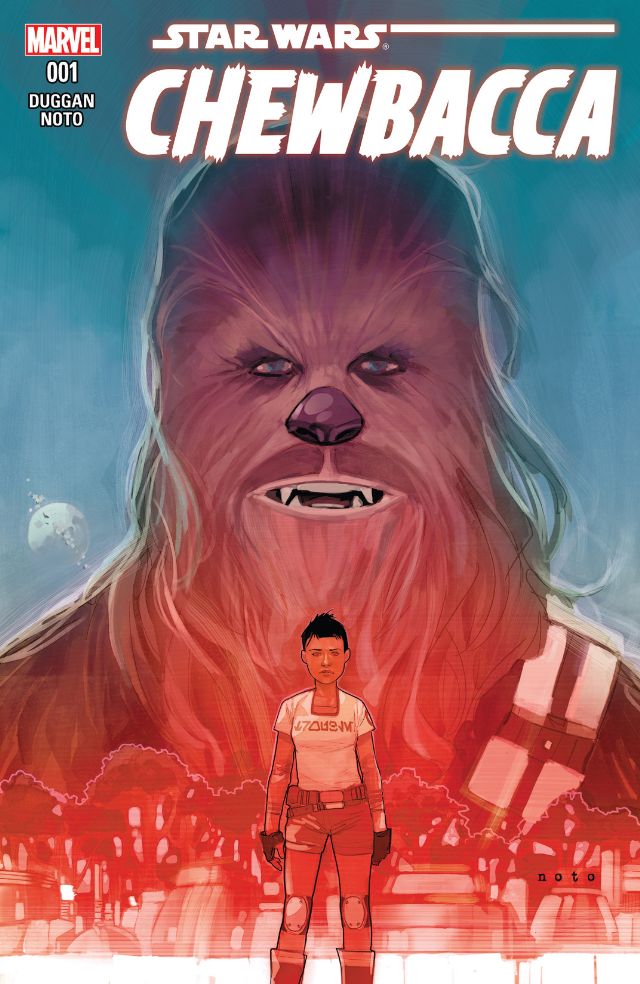 So, who is Chewie? Marvel’s Star Wars: Chewbacca #1 gets a lot of milage by not quite answering that question. Writer Gerry Duggan and Phil Noto put the Wookie in a fairly open-ended situation. He’s stuck on a planet, his ship broken, at least slightly enjoying the one moment of peace and quiet he seems to have had lately. It’d be easy for Duggan to play Chewie primarily for laughs but he mines most of the issue’s heart with dialogue. Frankly, it’s an interesting choice. When the series was announced, I pictured Chewbacca as being something of a comedy book, using Noto’s detailed but stark painted style to highlight Chewie’s dissonant presence, maybe using him as a sort of walking, hairy straight-man in a constantly escalating situation. Instead, the pair take a different approach, using Chewie’s lack of words as the most interesting thing about him.

Much like I did 142 words ago, Chewbacca #1 has most of its characters asking, “Who is Chewie?” As he wanders around the backwater planet, looking for the parts he needs, he’s constantly confronted with people who want to assume they know his motives and personality. A junk vendor wants to treat him like a gawking yokel. A Sabacc dealer wants to treat him like a bully, following that ol’ “let the Wookie win” philosophy. Zarro, a young escaped slave, instantly assumes Chewbacca’s a mercenary, someone she can hire to save her father and stop an Imperial-backed mine-baron. Her interactions with Chewbacca take up the majority of the issue’s second half as she tries to convince him to take on the Empire for her. Still, their dialogue is full of assumptions and it’s only when she’s able to touch on something more universal that the relationship between the two changes.

I would not have expected Chewbacca #1 to be one of the stronger debut issues for Marvel’s run on Star Wars comics but Duggan and Noto excel here by offering a compelling portrait of one of the series most often ignored heroes. It’s a book that seems to promise to define Chewbacca more by the end but the margins here, the complicated unknowns of this beginning are the most compelling bits.