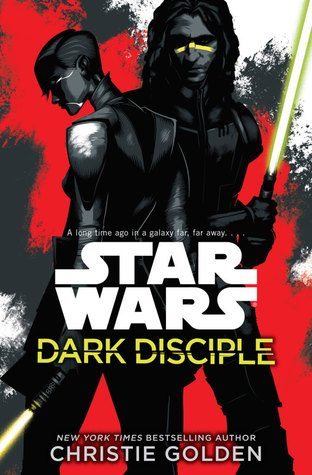 I was a late convert to the awesomeness of The Clone Wars series. To be perfectly honest, the Clones Wars and the Republic Era from the prequels never really captured me the same way that the Rebellion and the fight against the Empire had in the original trilogy. But after The Clone Wars ended I decided it was time to give the series a try.

I started wanting to explore this era more but the plethora of books from the old extended universe made the task daunting. Dark Disciple is one of the newest books in the new canon and so far the only one that takes us back to the Clone Wars era. It seemed like the perfect opportunity to jump in.

It helps that Dark Disciple is based on an undeveloped arc intended to be a part of the show. Granted, it’s probably a bit darker than they ever would have aired on television. But the characters are familiar  – as are both the pacing and storytelling format. It feels right. It feels like a part of the Star Wars story as a whole. This is one of the best things about the new canon in general. They tell a wide variety of stories but they all fit together.

Dark Disciple follows fan favorites Quinlan Vos and Asajj Ventress on a very unexpected and troubling mission. After coming to the decision that Count Dooku needed to be eliminated, the Jedi Council sanctions Vos with assassinating the Separatist leader. They recognize he cannot do that on his own so they come up with a plot to get Ventress to help them. The two of them become partners and ultimately become something much more.

I’ll be honest, I wasn’t expecting a love story when I first started reading. Jedi, after all, are supposed to be above such petty things as romance. But as Vos finds himself entangled with a number of forbidden influences, falling love seems to be the least of his problems. Ventress and Vos are two very different people with two very different backgrounds and I was a little surprised at how well they fit together as characters. There’s a great chemistry there.

There’s a lot of things that are great about this book.

It addresses a lot of heavy issues surrounding the Clone Wars in ways that no other canon media has done so far. We see the Jedi as something other than the blameless heroes. We see the value – and devesation – that comes from utilizing both the light and dark sides of the Force as Ventress instructs Vos on how to embrace the dark side in preparation for their fight against Dooku. We see just how far someone can fall and just how much can be justified in times of war.

Most importantly, though, we see Ventress in all her glory. She’s always been a really intriguing character and Dark Disciple lets us explore more of her backstory. In The Clone Wars I thought she was an interesting character but this is the book that made me really love her as a character.

Unfortunately, while I think she was pretty much fantastic throughout the book the ending – and the conclusion of her story – is the reason this book gets four stars from me instead of five. It’s a fantastic book for so many reasons. And I don’t want to spoil too much of the story for you. I just think that a character like Ventress deserved more than she got from the ending of this story and that with a whole new canon timeline to populate with new stories, she could have done so much more.

That said, I do appreciate that this is one of those stories that does not end well. So many books feel obligated to have a happy ending so that people feel like they are getting the pay off them deserve by reaching the end. In my opinion, though, that cheapens the story. Dark Disciple is thankfully one of those books that doesn’t hide from it’s dark, depressing narrative.

As much as I might disagree with certain choices that were made, then, I appreciate the book a lot. Star Wars is many things but it’s not always happy and the Clone Wars era in particular doesn’t need to be sugar coated. There are harsh realities to the war and Dark Disciple thankfully doesn’t hold them back.

Fans of The Clone Wars absolutely need to read this book. As most of our new books seem to be focusing on the build up to the sequel era, I don’t know how long it will be before we get to revisit the old Republic again. But if this is our last journey back there for a while at least it’s a good one!

A review copy of the prequel short story Star Wars: Dark Disciple was provided by the publisher via NetGalley in exchange for a fair and honest review.