Nerdophiles Catch Up With… Marvel’s Agents of S.H.I.E.L.D.

Inhumans, and SHIELD, and Hydra, oh my!

Season two of Marvel’s Agents of S.H.I.E.L.D. was quite a ride; coming fresh off of the success of their biggest plot twist in season one, a plot twist that continues to affect the ongoing plot of the series, let’s catch up with what happened last season on SHIELD, with a highlight over some of the main storylines.

There can be no doubt that season two revolved almost entirely on the Inhumans, from their reveal in the first half of the season to building up the conflict against the rest of the world in the second half of the season. Catalyzed by the introduction of Hydra’s Daniel Whitehall, the foray into Inhumans was two-fold in the first half of season two (2A). First, there was the diviner, also referred to as the obelisk. It turned people into stone who touched it, unless you happened to be an Inhuman like Raina or Skye. The diviner, and more importantly, its contents: the terrigen crystals, play a much larger role in 2B. Second, there was the search for the alien city through Coulson’s carvings after receiving GH-325.

The terrigen crystal reveal at the end of 2A during the winter mid-season finale brought on huge changes in the story and pushed the plot forward into full Inhumans territory. After finally getting the diviner into the alien city and opening it up, Skye and Raina are transformed by the terrigen mists and Trip, devastatingly, becomes another victim to the diviner. This transformation changes everything, and not only biologically. Raina is transformed physically, with spikes growing all over her body, and causes her not only to doubt her purpose but also to become very lost. Skye develops her quake powers (beginning her transformation to the comic character that she was based on, Daisy Johnson), but in the process witnesses the death of Trip which continues to haunt her in the early episodes of 2B. 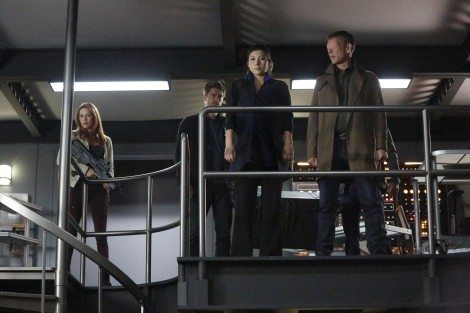 Skye’s change brings with it a whole new set of baggage. Her friends at SHIELD are forced to confront her as a potentially unstable power that might need to be indexed (SHIELD’s version of tagging you for a possible future bag if you get too rowdy), and her biological family begins to come out of the woodwork to collect her. Being pushed to the brink by the infighting between Coulson’s SHIELD and Gonzalez’s SHIELD, she escapes to Afterlife, the sanctuary for newly transformed Inhumans. She meets her biological mother, Jiaying, who was previously believed to be dead, a teleporting Inhuman named Gordon who also suffered a very physical transformation, and an Inhuman with electrokinesis named Lincoln who befriends Skye.

Admittedly the Inhumans plot took a pretty demonizing route in the finale, when Jiaying turns out to be more of a villain than Skye’s village-murdering very-off-kilter dad. Aiming to start an all out war against humans, Jiaying stages an attack on the Inhumans by SHIELD and then rallies the troops to expose the world to the terrigen mists. This would mean that anyone without Inhuman genetics would turn into stone and the Inhumans would all go through the mists together. For comic book readers, this was basically their (more genocidal) version of the terrigen bomb.

Although Jiaying’s plan was foiled, and she was killed by Cal, the terrigen crystals were exposed to the ecosystem, and eventually packaged into little fish oil pills to be shipped around the world.

Cut Off The Head…

Hydra nearly reaches a peak within the MCU, after breaking down SHIELD from the inside out, they spend much of 2A causing mayhem in the name of SHIELD and turning the political and international world against SHIELD. It’s only when they are systematically eradicated by SHIELD by blunt force, after Coulson kills Whitehall, that it seems like they are gone for good. Hydra had a large presence in 2A, from facing head on against SHIELD in the race towards the Inhumans reveal to introducing a new side of Jemma Simmons as well Bobbi Morse.

Their presence was nearly gone by the end of 2B. Its last remaining head, Bakshi, was kidnapped by Ward and Kara and brainwashed into being their foot soldier. Though vestiges of storylines from 2A bled into 2B as we saw Simmons accidentally murder Bakshi while attempting to kill Ward, and we learn that Bobbi’s undercover work at Hydra lead to her betraying Kara and being brainwashed.

Due to the events of the finale and May and Hunter’s final face off against Ward and Kara, which ended in Ward accidentally killing Kara thinking she was May, it seems all SHIELD did was cut off one head to be replaced by another. With no former Hydra to guide him in any which way, it seems Ward will be purely fueled by his own rage.

The biggest change within 2B was not just the introduction of the Inhumans, but also the arrival of “real SHIELD” or rather a SHIELD lead by people who are determined to change the ways of the past. Unlike Fury and Coulson’s version of SHIELD that advocates for secrecy and “need to know” a new SHIELD rises, with Bobbi and Mack on their side, as a SHIELD that opts for transparency.

I’ll admit that this wasn’t the most solid of storylines, since it’s original purpose felt like it was supposed to introduce the idea of civil war to mimic the story that would occur in the films. If this was the original purpose, it got lost when it was swallowed whole by the Inhumans storyline. While the leader of real SHIELD had real reasons for why it was time for a serious change, Robert Gonzalez was killed by Jiaying in an attempt to start a war against the humans and in less than twenty minutes, Coulson had the entire leadership of real SHIELD essentially under his thumb.

Like it or not, Coulson’s SHIELD is still Fury’s SHIELD, and that organization lent itself to cracks in the infrastructure. Coulson’s own secrets while building the helicarriers that Fury would use or creating the new Avengers base in Age of Ultron caused a rift between he and May and caused her to question her loyalties to him. Even project Deathlok, bringing back fan favorite Mike Peterson, was done under the cover of darkness. With Gonzalez dead, Coulson became the director of SHIELD again with a board that essentially votes on his decisions, although he offhandedly laughs at this notion with Maria Hill. I’m still up in the air about whether or not we will see any of Coulson struggling to act his way versus the people’s way.

An intriguing, though oddly positioned plot was Ward’s storyline throughout the season. With the revelation of being a sleeper agent and being captured by SHIELD, he’s left in their vault as a source of information. Although Ward’s plot starts off interesting, it often times feels misplaced amidst all the other action. After three suicide attempts between seasons, his story goes from one of capture to one of vengeance. After escaping SHIELD’s clutches, he wastes no time in killing his older brother to gain closure for himself.

He then returns to kidnap Skye to bring her back to her father in order to keep his promise to her. As earnest of an act as this could have been on his behalf to reunite father and daughter in an attempt to win back Skye, it does him no good. Skye shoots him four times and leaves him for dead. He is saved by Kara, who turns into his partner-in-crime for 2B. Their relationship feels discomforting at times, with Kara ready to run away with Ward at any moment and Ward urging her forward towards closure of her own.

Kara’s story of betrayal by Bobbi and search for revenge ultimately leads to her own death at Ward’s hands. After killing Kara, it seems that Ward is fully ready to accept the role of head of Hydra, seeing the power vacuum left after SHIELD eliminated the heads. Personally, his entire storyline felt like it was leading up to the eventuality that Ward would be back in full force in the third season as a villain. And it looks like that’s just what it’s going to be.

And we can’t forget the last parts of the finale, where we learn that Cal has undergone the TAHITI project, and had his memories wiped. I’m still not sure if he actually knew what was coming for him in his final goodbye with Skye, but like it or not, he’s had his brain wiped. It’s an interesting commentary on SHIELD if you think that what they did to Cal and what Hydra did to Kara are essentially two sides of the same coin. They are both being manipulated into living a life that’s not theirs, Kara’s life was erased to replace with new sins and Cal’s sins were erased to replace with a new life. The message feels less like “even bad guys can be redeemed” and more like “even bad guys can be good with some brainwashing”. TAHITI always left a sour taste in my mouth and the ending with Cal was more bitter than bittersweet.

This scene also put a light emphasis on something that we’ve been getting a heavy emphasis on in the past weeks through promotion, which is that Skye is now known as Daisy Johnson. The writing team even going as far as to joke (or not really joke) that they’ve got a Skye jar in the office and every time someone says the name Skye instead of Daisy, they’ve got to pay a dollar. We’ll see how the show deals with this transition when 3×01 airs this coming Tuesday. I’m hoping it’s a little more graceful than “My name is Daisy, let’s move on.”

So just to recap where we are now…

And of course, before I can finish up we’ve got to say good bye to all of the great characters who died during the season: Antoine Triplett, Raina, Kara Palamas, Isabelle Hartley, Jiaying, Gordon, Robert Gonzalez, Sunil Bakshi, and Daniel Whitehall.

Tune in this Tuesday, September 29th on ABC for the premiere of season three of Marvel’s Agents of S.H.I.E.L.D.!