The Portlandia Cookbook is Equal Parts Hilarious and Delicious 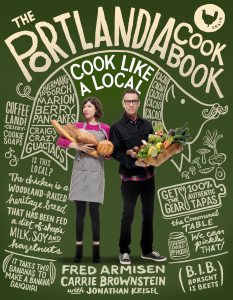 The one thing about this book that I really want to point out is that my mother loved it more than I did. I might be a huge fan of the show Portlandia, but my mother is a fan of cooking, and this book definitely had something for both of us. It really needs to be reviewed in two parts: as a cookbook, and as a show-related book.

As a show-related book, I think it actually deserves a five-star score. With every recipe comes a Portlandia story. There are all sorts of funny inserts and beautiful graphics throughout the book. In one section, there’s a two page spread titled Dumpster Divers’ Dinner Party Guide where it lists a number of horrific things I hope no one ever serves at their dinner party. Most of the jokes are show-related and if you aren’t a fan of Portlandia, you’d probably be confused by them. As a fan, though, they were a delightful addition to the cookbook and made it a fun read.

However, it is as a cookbook that I think this book actually sings. When I took it out of its package and my mom saw it her eyes lit up. She spent the evening pouring over the recipes, marking the various pages of items she planned to make. Probably the best part was the variety of items and the uniqueness of the items offered. The book was broken down into five sections: Small plates, Main Courses, Desserts, Drinks, and Brunch. It provided anyone reading it with everything they could possibly need to create an entire day’s worth of meals.

We tried two recipes, and by we I mean my mother. She immediately gravitated to Claire’s co-worker’s sichaun chicken wings and the chicken shawarma with tahini mayo. There is a downfall to a lot of the recipes, and that’s the fact they can require some unique ingredients you might not have on hand. That was the biggest issue we ran into trying to prepare them. We definitely had to plan ahead for these two dishes and make sure to incorporate the ingredients into our grocery list. So keep that in mind, because I don’t think The Portlandia Cookbook is going to save you if you need to throw something together with whatever is handy.

Otherwise, the wings and shawarma were delicious and easy to put together. The instructions were, over-all, solid and easy to follow. They produced meals that were equally delicious and aesthetically pleasing. The Portlandia Cookbook gets four stars over-all for the recipes provided and ease of putting together the meals. I would recommend this book to anyone who has a Portlandia fan in their life, even if they’re not much of a cook. It is handy to have around and I imagine will be great for future dinner parties.

A FREE COPY OF THE PORTLANDIA COOKBOOK WAS PROVIDED BY BLOGGING FOR BOOKS FOR A FAIR AND HONEST REVIEW.