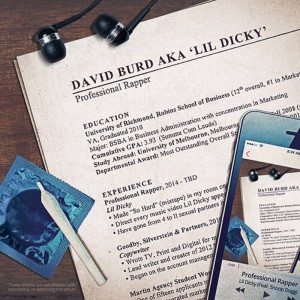 “Well, I wanna be the dude that came in and made the stand up rap / With the random rap and the man like that for the people that was anti-rap / Yet, the fans of rap started recognizing anti-rap is ironically one of the real brands of rap left.”

So states David Burd, aka Lil Dicky, on the title track of his Kickstarter-funded debut album, Professional Rapper. It’s a legitimate strategy in some ways; at this point Lil Dicky has gotten far more attention as a comedian among non-rap fans than as a rapper among hardcore hip hop heads, so he has the platform to change the minds of the proverbial player haters. But here he makes the rookie mistake of telling instead of showing – while he had the opportunity to pull of this impressive feat and to surprise both fans and haters with his potential, he’s instead set a bar for himself that he may not be able to hit.

Given this goal, how many casual fans could really be expected to make it through this hour-and-a-half long behemoth? Most people who give Professional Rapper a listen will be Redditors who liked the “Classic Male Pregame” video and want a few more laughs, but in order to find them, they’ll have to wade through an equal amount of “serious rap” to get to it. Lil Dicky’s more legitimate efforts are competent, but their unfocused themes don’t cater to his white suburban audience he seemingly intends to capture, their production sounds exactly like you’d find on any other modern hip hop album, and their comedic flair lacks the nuance and depth of contemporaries like Action Bronson and Das Racist.

Moreover, even if Lil Dicky’s more “real hip hop” songs that fill the space in between had been good, the album would have suffered for trying to be two albums at once, uncommitted in its tone and style. Instead, they add a damper to the entire project, such that exhaustion sets in and makes even the humorous tracks harder to enjoy once they arrive. His attempts to flesh out both his comedy and and his legitimate rap in the same album only make the final product bloated and inconsistent.

Lil Dicky still shines best in his comedy, and although his jokes work better when he can use the visual component of his music videos, this strength isn’t lost entirely. “Classic Male Pregame” aptly captures the awkward and inconsequential nature of its titular subject matter, and while the T-Pain-featuring “Personality” contains too much filler between its punchlines, it delivers on the somewhat cliche comical premise of making up for physical inadequacy with winning personality in a relatable way (“I’ma take you to the zoo and be cordial and witty / I’ma tell you hella stories and be mindful,” he raps).

But even these highlights suffer from Dicky’s apparent inability to cut out a single idea he has.  Take “Lemme Freak,” his best song and one of his biggest hits, which naturally appears here as well. But this time it’s followed by “Lemme Freak For Real Tho (Outro),” a completely unnecessary followup in which Dicky croons in autotune for almost as long as the length of the original track. A few good jokes do appear, but this superfluous extension of the premise diminishes the impact of the original song, like an amateur stand up comedian who continues rattling on about a subject far after he runs out of real material.

Then there’s “Pillow Talk,” where Dicky plays both sides of a post-coitus conversation. It’s another instance where he accurately brings out some of the honest character of the dynamic between two people who barely know or relate each other but feel the pressure to become friends, and he aptly demonstrates the tone of the dialogue with the speed and cadence of his flow. But then it goes on for nearly eleven minutes, including an extensive verse from the point of view of his own brain that makes little practical sense and which Dicky chooses to perform in a character voice that’s nearly impossible to understand. He has a tendency of coming up with strong ideas and refining an authentic voice for them, but then ruining them with his own overindulgence.

Final Thoughts: If Dicky wants to be a great rapper, he needs to develop his production and lyricism such that he stands apart from the majority of rappers in the way he claims he does. If he wants to be a great comedian, he needs to develop his timing and delivery such that he doesn’t keep killing his own jokes. But as long as he tries to be both, he’s never going to be either.