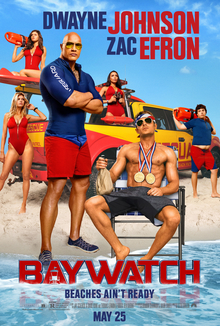 Baywatch follows a team of elite lifeguards as they investigate a dangerous drug ring run by the stunning should-be-Bond-villain Priyanka Chopra, all while orchestrating elaborate water rescues like badasses.

The secondary story follows the new recruits to the Baywatch team, including Zac Efron, a washed up Olympic athlete more concerned with the ‘i’ than the ‘team,’ and adorably clumsy tech-wizard Jon Bass, who pines after one of his coworkers.

I’ve seen a lot of other reviewers panning this movie, but I absolutely loved it.

Don’t expect it to be a new and innovative comedy, though. This movie is exactly what you think it will be: a fun, bikini-clad romp on the beach with plenty of abs. Think 21 Jump Street but with water and more slo-mo. Or Scooby Doo with more f-bombs.

The opening scene is a ridiculously over-the-top tribute to the old Baywatch series. It features Dwayne Johnson running over the beach, diving slo-mo into the water to rescue a bleeding wind-surfer, and emerging dripping wet with the title credits soaring over his head.

I leaned over to my friend and whispered, “I am here for this,” and never looked back.

To love this movie, you’re going to have to do a good amount of suspension of disbelief. But if we collectively agreed to believe that there were multiple seasons worth of naval crimes on NCIS, I’m willing to let a few vigilante lifeguards investigating some murders slide. But really. There were so many explosions. No one knew that the bay was this flammable.

I’m very pleased with how this movie avoided offensive stereotypes and jokes for laughs. Sure, Zac Efron cross-dresses as a woman as a disguise for a cheap joke, but other than that, the movie avoids a lot of the offensive ‘fat-jokes’ and casual misogyny that had the potential to come really easily.

All in all, it had a lot of heart. It didn’t take itself too seriously, and it leaned into campy throwbacks assisted by snappy, R-rated dialogue (mostly at Zac Efron’s expense). It’s all of the wish-fulfillment with none of the guilt.

The soundtrack is fabulous. Each song was perfect for a glitzy, fun beach film, and with its help, the movie itself never felt long or tired.

Final Thoughts: There were plenty of chiseled baes to watch, and you’ll have a lot of laughs doing it.