Conventions are a dime a dozen, but have you ever wondered how the people behind them made it happen? Here’s the thing: with comic book convention popularity soaring, it might not be beyond the realm of possibility for the average Joe to put together a convention that friends will write home about. I had the chance to sit down with local mastermind Casey Ocupe to discuss some of the challenges and realities behind building a convention. Our discussion is summarized below in some key points that came out of the interview, and hopefully it will give all our readers a better idea of what it is like to craft a local convention.

DO be prepared to deal with a number of different personalities.

Putting together a convention, especially as the director, means having to work with a lot of different people to make the show work. There’s those representing the venue, the exhibitors, the special guests, people who supply various items, sponsors, and more that a director has to help coordinate when putting together an event of this size. Not only are outside personalities important, but having a solid connection with family and friends plays into it too. Casey pointed out that he and his family had to be honest with each other from the start in order to make his insane convention work hours work within the structure of daily life.

There’s a lot of people involved, and it requires a director who is willing to learn to work with these different personalities in order to achieve a goal.

DON’T expect it to be cheap on either end.

Thankfully, Casey was pretty honest and open about the costs associated with the convention. To start, when giving a general number of what the convention will cost over-all, he said something “around the price of a new, awesome car.” The balance of those funds also isn’t fifty-fifty, start to end of the convention process. He pointed out that the upfront costs vs. ending costs fall somewhere in the sixty-forty divide. There’s definitely going to be some serious upfront costs in putting on an event of this side, and it is something important to understand.

He also pointed out that it is a zero sum game. You either succeed, or you don’t, but not succeeding is not as simple as saying “whoops, I messed up.” It means a huge debt to the venue, a lot of upset vendors, and cancelled guests. When Casey first began to put together the convention he imparted to me that failure wasn’t an option for him, and he stands by that statement. You make it work financially, or you don’t do it at all. 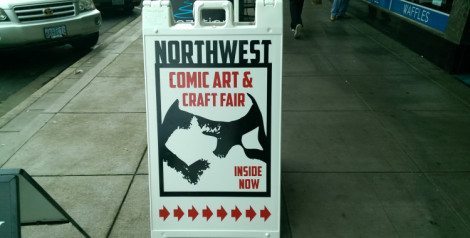 DO expect to wonder just what you’ve gotten yourself into.

It happens. Casey was candid when I asked him the question, and pointed out that about once a month he wonders just what the heck he was thinking coming up with a convention. As with any huge projects, there will always be doubts, and it is better to embrace them and keep moving forward than succumbing to them. Don’t allow despair, or stress, or whatever is hanging over you partway through planning the cause force you to give up. Rather, you have to push through it and look at the bigger picture.

As mentioned above, putting together an event of this magnitude is an “all or nothing thing,” according to Casey, and there is a lot of risk in an undertaking of this size. With great power comes great responsibility, and sometimes the weight of it all will crash down. Sponsorship won’t come through, you’ll question whether or not you should have added an event, and booking guests will seem like a daunting task. Regardless, push through, because in the end things will generally come together if you put in the work.

DON’T wait until the end to develop a process and procedures.

Casey really emphasized that the one thing he really wished he would have known at the beginning was the importance of having a process. He said he didn’t really come up with a process, policies, or procedures for getting things done until he was seventy or eighty percent into the event. Organization is key, which makes sense considering that’s ultimately what a director is doing. Learning how to create task lists, keep appointments, and organize information, people, and money, is best done at the beginning.

He pointed out that nailing down these processes will definitely aid him in preparing for the following year, and he sees everything going much more smoothly. So do yourself a favor and figure out how you’re going to do things early. You just might save yourself a lot of grief.

DO surround yourself with a phenomenal team of people.

Your team will be important, Casey said. Having personalities you can work with is important, as mentioned at the beginning of the interview. However, more than that, you’ve got to have dependable people you can trust. Your team needs to be a group of people who are as dedicated to the event as you are. They need to be able to complete the tasks assigned to them with minimal interaction from the director, and as a director, you want to surround yourself with people who will help the event and not hinder it.

Casey said to “trust your gut,” when putting together a team because that’s going to be the best gauge of who will work and who won’t.

Finally…be prepared to have some really cool experiences you won’t get doing anything else.

Being a director seems to be fun, and Casey agreed that he’s gotten to have some cool experiences he’s not sure he would have experienced otherwise. Getting a call from the Red Ranger, talking details with a number of potential guests, and meeting loads of different people are all things that make the job that much more rewarding. In the end, he’s created something great that’s going to provide a fun weekend for people in a town that sometimes struggles to do cool things. He took a leap, and then another jump forward, and Northwest Comic Fest this weekend is slated to be an event like no other.

If you’re in the Salem area, or the Pacific Northwest, don’t miss your change to check out Northwest Comic Fest this weekend. August 15th and 16th, the Salem Convention Center and most of downtown Salem will be transformed into a utopia for geeks. Tickets are available now, vendor slots are filling up fast, and the guests are preparing for their panels and presentations. Don’t miss out on the chance to be a part of something brand new and awesome!