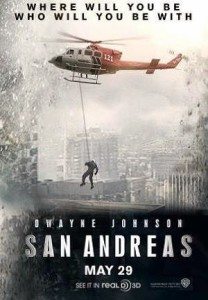 If you’re going to see San Andreas for the plot, character development, and chemistry between the actors/actresses… you’re going to be severely disappointed. If you’re going for completely whack, all the science you’ve ever learned out the window, CGI crank fest, and The Rock looking ripped… it’s perfect. San Andreas even approached a USC earthquake expert who gave his scientific advice to the film and none of it was used. There is absolutely no way for the San Andreas fault to reach magnitudes of 9 and no tsunami that big can be produced. San Andreas is very much like the movie 2012 with John Cusack, but The Rock makes a better action hero.

The premise of the movie is simple, you have Ray (Dwayne ‘The Rock’ Johnson), who is an LA Fire Department Rescue helicopter pilot versus the giant ass earthquake that shakes all of California. His daughter is stuck in San Francisco and he’s in Los Angeles, when the earthquake hits, he stops at nothing to try and rescue his daughter with his wife tagging along. The modes of transportation switch so often in this film you lose count (not really, but it’s ridiculous, remember stop at nothing).

Along the way to the rescue, everything that can go wrong, goes wrong. Literally it’s like God has it out for The Rock and is just going machine gun crazy on unlimited ammo. Aside from that, the CGI is not bad. It’s actually done pretty well and I can see this being a visual treat on IMAX. It might get a bit repetitive because you can only see buildings crash, crack, and break open so much. At least 2012 had all the natural disasters, here you only get earthquakes.

The acting in the film is pretty good. There are some very tender moments where Dwayne ‘The Rock’ Johnson shows emotions and you see past his hard exterior. Emma (Carla Gugino), the mom, is very capable on her own and it’s great that she does all her own stunts since she was a former stunt-woman. The cutest chemistry on screen is between Blake (Alexandra Daddario), the daughter needing rescuing, Ben (Hugo Johnstone-Burt), the British architect looking for a job, and Ollie, the architect’s adorable, suave, younger brother (Art Parkinson). They all meet in San Francisco and fight together to stay alive. The chemistry is good enough without it being too corny and overdone. It felt natural enough and it moved the movie along. The plot is too simple to care, it’s like an obstacle course, just get through to the final goal.

Final Thoughts: Bored this weekend and want to see absolute destruction? Bingo! You’ve found your movie. Go with friends and just watch buildings being blown up, torn apart, and the earth just ripping it up. The cast hold the movie together for glimmers when there isn’t destruction on screen enough to not make you bored.