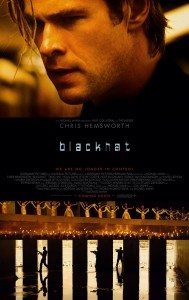 I’m just going to be blunt – this movie was awful. This movie ran for two and a half hours and I can’t remember thinking at any point, “Wow” or even, “Okay.” I did, however, see this movie with dc408, which is a meetup group for attendees of Def Con in the Bay Area, and their commentary had me laughing throughout the film, making it go by a lot quicker than I could have anticipated.

Blackhat overall was an incredible disappointment, one that even left my boyfriend whispering as we were making breakfast the next morning, “I can’t believe how bad it was.” Forget about its “hacking,” which in the film is nothing more than a few seconds of tapping on a computer, forget about the out of nowhere love story between the male and female lead, and forget about its action scenes that seemed too cliche, the film itself had a hard time pinpointing exactly what it wanted to be, and it suffered for that.

Chris Hemsworth stars as Nick Hathaway, a man currently in prison for hacking who finds his skills needed by the government after someone hacks into a nuclear plant in China, causing the coolant system to stop and the plant to explode, which someone used to manipulate the stocks in the US. China determines that they have to collaborate with the US, especially when the man in charge of investigating the explosion, Dawai (Wang Leehom), realizes someone took some code that he and his roommate, Nick, wrote in college and tweaked it to do this damage. After some convincing, the government releases Nick from prison and into their care where he immediately starts being a snarky alpha male around everyone.

Lien (Tang Wei), Dawai’s sister, is an accomplished computer scientist herself and has joined them on their joint mission, along with Federal Agents Carol Barrett (Viola Davis) and Jessup (Holt McCallany). They begin their adventure in the US before they discover that they have to go to Hong Kong to figure out what really happened, and that’s where the action begins.

And that’s why I say I can’t decide whether this was a boring art house film or a boring blockbuster. The cards are set for either – beautifully shot story with a typecast lead actor taking on a challenging new role, or just another shoot ’em up film with another typical male lead. The love story was convoluted, the characters never fully fleshed out, and the stakes never really high at all. I never felt a sense of urgency during this film even though I could tell by all the standard cues that I was supposed to.

I’m sorry that, as a female in the tech industry, I’m tired of sexist male hackers being portrayed as the alpha male (Nick calling Carol “Chica” out of nowhere made me just as mad as it did her, until she totally let him call her that anyway after he broke into the NSA). I’m tired of the ubiquitous answer to all questions now being, “The NSA,” and I’m tired of 9/11 always being thrown into a character’s history for a tragic effect that has no lasting impact.

The film ends as all action films do – with a showdown in a foreign country during a cultural celebration, and as our heroes face their biggest battle, I couldn’t help but be bored. It was just another film trying to be smart but just missing the mark.

Shouts out to the crowd though – from snide remarks about how hackers don’t look like that, to technical jokes about the “hacking” they were doing, and so much more, you all made it completely worth it.

Final Thoughts: Don’t waste your money, this is a snooze that is worth maybe a RedBox at best.