Heroes of the Storm brings teamwork back to MOBA 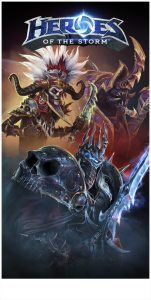 Heroes of the Storm is Blizzard’s entry into the MOBA genre, a space which many companies have tried to enter, attempting to emulate the success of Riot’s League of Legends and Valve’s DOTA2. EA put out Dawngate (review here), which despite some early promise failed to make a mark on the genre and had the plug pulled on it in November. S2 Games recently released Strife as a follow up to their Heroes of Newerth. Then there’s Smite, which is currently coming up a distant third to League and DOTA. With the exception of Smite, I have played every game listed. Being no stranger to the world of MOBA gaming, I decided to take a look at Heroes of the Storm (HOTS) in time for the closed beta.

I waited a very long time to get an alpha invite from Blizzard, and have been playing the game over the last two months with a group of friends. Blizzard geared up for closed beta by sending out a deluge of invites, to the point where wait times have shrunk from several minutes to 30 seconds. Getting in requires some patience and a Battle.net account with updated beta preferences. Or, if you’d prefer to just drop some cash, Blizzard is selling closed beta access in a Founder’s Pack. If you don’t have either, worry not, the game is estimated to go into full release in 2015.

To get on with the review, Heroes of the Storm is a more casual take on MOBAs. If you’ve played League, Heroes lacks a few key components of that game. For one, map selection is randomized. Rather than forever playing on the same three lane + jungle map, you get a surprise every time you join a game. Heroes rotates through 5 “battlegrounds”, each with varying objectives. The premise is still the same: destroy your opponent’s core to win the game, but the maps force players to change their strategies on the fly to be successful. It’s not perfect, you might hate one map and love another, but in the future Blizzard might allow players to “opt-out” of playing certain maps. 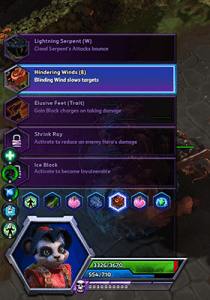 So you have random maps. Another big change is the removal of last-hitting as a mechanism. With that came the removal of the gold system altogether, which means no shopping. Instead, killing heroes and standing near creeps when they die grants your entire team XP, and leveling is what gives you access to new “talents”, a radical departure from other MOBA games. To give you an example, at level 4, Kerrigan (an assassin) can choose between 5 talents, one of which empowers her basic attacks, another that gives her splash damage, and yet another that lets her poison an enemy hero. In League, those effects are granted when you buy a particular weapon after returning to base. Heroes allows players to make build decisions fluidly while in lane, not needing to pause the action.

Action, that’s what Heroes is good at. The battlegrounds of Heroes are smaller than the maps of both DOTA and League and the timed objectives on all battlegrounds force players to clash much more frequently. When night falls, or the mines open up, or a new tribute spawns, that is when fights break out as two teams struggle for control. Winning an objective also feels more satisfying because it often requires a higher level of team synergy- such as holding two shrines in top and bottom at the same time while mid attempts to activate it, and the rewards themselves are often interactive. On Twisted Treeline Terrors, gathering 100 seeds makes a plant spawn at base, which can then be controlled by a teammate to wreck havoc on enemy buildings.

In comparison to other MOBA games, Heroes is “softer”. Mechanically, it is more forgiving to new players and easier to navigate strategically as well. Of course, it has depth and nuance within its various mechanics, but Blizzard has intentionally curated accessibility. A comparison to Hearthstone, Blizzard’s card game, would be easy to make. Both are products that the company has created that have the potential to appeal both the casual and the core demographics of players: easy to learn, fun to master. Perhaps tellingly, Heroes also lacks the infamous /All chat, making cross-team flaming impossible. Toxicity is currently quite rare, likely due to the closed off alpha and beta community.

Progression in Heroes is doled out in terms of a familiar leveling system, for both the heroes of the game and the account itself. Heroes at first start off limited to two talents, but as you play them they gradually open up. Hitting http://artsandhealth.ie/diclofenac/ level 5 with a hero gives you 500 gold. At the end of a game, players and their heroes receive EXP matching how much they got in the game. Account levelling awards include unlocked rotation slots, sums of gold (used to buy heroes), and the eventual ability to play ranked matches at level 30. Blizzard has also thrown in daily quests, which consist of objectives like “play two games as a support” in order to encourage players to log on and experiment.

Heroes‘ shop is a bit pricey, but luckily they forego creating a separate currency and instead list items clearly in USD. In-game gold can be used to unlock heroes, but cosmetic items such as mounts and skins cost real money. The exception would be that every hero has a “master skin”, which can be purchased for 10,000 gold after grinding to level 10 on that hero. Playing a typical game will net you around 30 gold on a win, which is a bit paltry before you factor in the daily quests which reward up to 200-500 gold on completion. Blizzard’s messaging in this case is that Heroes is a daily play, and that is how I’ve best enjoyed it as well. Due to the at-times sketchy matchmaking, RNG maps and small hero roster, extended marathons can wear on you.

Heroes is also best played with a pre-established group. Because the maps objectives require team coordination and a lot (a lot) of map awareness, getting on Skype or Ventrilo with even one or two other people can definitely help. Blizzard recognizes this, and even if you don’t have friends who play they make it easy for anyone to form a group on the fly with the game’s general chat and “find a party” feature. This is essential, because after you queue up, you simply get matched to whoever is available to fill the empty slots. If you go in alone, you might end up with four other carries, a team full of supports or some other trainwreck team composition with no chance to change your mind. You also get a large team EXP bonus for queueing with another player.

Synergy is huge in Heroes, because no single person can gain a huge lead and go around carrying everyone. Some characters do more damage than others, some might even be able to bring enemies from 100 to 0, but it feels very much like a team game. The team shares EXP and levels. One person can’t bridge that gap. Consequently, it makes it more difficult for one person to drag the rest of the team down by “feeding” (dying a lot and giving the other team a huge lead). Because the matchmaking can be hit and miss, communication is the key in making sure the team knows what current objectives are. Running around and doing your own thing won’t win you games. Due to the tiered progression of levels, teams don’t snowball into becoming unbeatable very often.  Instead, every time I’ve gotten my butt kicked it was because the other team was consistently better at capturing objectives, at defending, and at fighting. 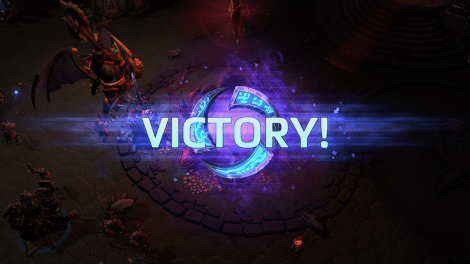 What I like most about Heroes of the Storm is that it isn’t a game about farming last hits for twenty minutes, hopefully nabbing a kill and then going down to contest a dragon, although that gameplay certainly has its complexity and merits. Instead, the flow of the battlefield in Heroes is what is really remarkable; a gradual uptick in tensity underlies each of the core mechanics. Instead of clashing for EXP or kills specifically, conflicts are about controlling the map and knowing when to push a lead or back off. A disruption in the team’s flow at a crucial moment (right before an objective spawn, stealing a boss camp) has huge ramifications on the game.

Heroes‘ back-and-forth nature makes it satisfying to play and to fight until the bitter end. I’ve won a game where my core was at 4% and the dissolution of the enemy’s strategy allowed us to win the game, I’ve won early and lost late. Losing one or two big plays in another MOBA might spell out such a huge lead that it’s over from that point on, but Heroes gives players the chance to keep trying.

Right now, Heroes of the Storm isn’t ready for high-level competitive play, and it might never be truly suited for it, but that’s okay. Blizzard has created a product that fills a need in the market for a game that is kinder, more unpredictable, and yes, more casual than others. As the rise of Hearthstone has proven, plenty of people want that, and I have no doubt that with Blizzard’s astonishing track record of success that Heroes will be yet another win for them.

Screencaps were taken by Kathy Pham, © Blizzard Entertainment & Heroes of the Storm