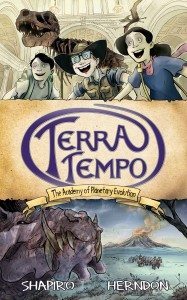 Terra Tempo: The Academy of Planetary Evolution is the third graphic novel in the Terra Tempo series. The series itself follows a group of young people around as they explore time and space in the name of science. This particular volume begins with the children attending the Academy of Planetary Evolution. Through a series of classes and various demonstrations, they were set to learn about how the earth developed. Upon successfully completing their coursework at the academy, they would graduate and be able to pursue studies elsewhere. All in all, it is a pretty straightforward storyline when stripped to its bare bones. However, the journey through the Academy is what really adds an amazingly rich depth to this particular story.

While the Academy may, at first glance, appear to be nothing more than a school it turns out it gives students the opportunity to actually travel to the time they are studying. History comes alive in a fantastic way for the kids as they learn about the big bang, shifting tectonic plates, and the development of life from the very beginning through the present day. All along the way they’re guided by big names in scientific history, such as Alfred Russel Wallace, Winifred Goldring, and Edward Drinker Cope. With historical figures leading the charge, the children and the reader get a chance to walk through beautifully accurate portrayals of history.

All the while they’re being followed by the Treasure Hunters, a group of questionable people who are on a search for the magical maps that allow for the exploration of geological time. Ari, one of the children, happens to have one of the magical maps he found while on a dig with his parents in Colorado. Unfortunately it makes him a target as the Treasure Hunters go out of their way to not only scare him, but eventually capture him and attempt to persuade him to give up the map. Thankfully, Edward Drinker Cope and various other historical figures come to the rescue and save Ari, protect the map, and bring peace between the various groups interested in geological exploration.

Probably the best part about this particular series is that it is based in a lot of fact. The heroes of the story in the form of historical figures are real and accurate. Anyone reading gets a chance to go back in time and refresh their memories about these important people who discovered a lot about the history of the earth. As an Oregonian, the attention the graphic novel pays to the various geological sites available to the general public is an absolute delight. If you’ve never been to the John Day Fossil Beds, you ought to make it a priority to get there because it is worth seeing. There’s a lot of rich geological history contained in Oregon’s soil and it is nice to see it get some attention.

Final Thoughts:
The Terra Tempo series is great for adults and children alike. It lends itself both to the eager desire to learn often found in children and the inquiring adult mind seeking a refresher. The Academy of Planetary Evolution takes concepts which could be considered dull when read in a textbook and brings them to life in a full color graphic novel that will keep audience’s attention without question. It is definitely worth picking up and reading and is one of those graphic novels I’ll keep on hand.