“Gods of Egypt” is Predictably Horrible and Awkwardly Scottish 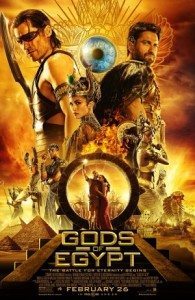 It’s hard to say what went wrong with Gods of Egypt. That is to say that so much of it went wrong and it’s difficult to pinpoint what exactly was the biggest offender. Perhaps it was the fact that 99% of the cast was white with two leading characters portrayed by a Dane and a Scot. Perhaps it is the fact that by default of “mythological movie” everyone has a British accent, except said Scot who apparently can’t do a British accent. Perhaps it’s the fact that in order to denote godliness, all of the mortals are mini-people compared to the gods and instead of bleeding blood they bleed gold.

Yeah, you heard me right. GOLD.

The list of movie sins goes on and on, I can’t just sit here listing them.

I could have overlooked this incredibly white-washed movie and maybe focused on the story objectively. Except the story is pretty boring. After watching Gods of Egypt, we struggled to even remember what was the most memorable moment. The movie is so full of horrible CGI and predictable lines and confusing accents it’s hard to really appreciate anything about it as a film.

The bare bones of the story is essentially about the Egyptian god Horus making a comeback after being blinded and having his throne usurped by his crazy uncle Set. It’s a story that could be inspired by Hamlet but maybe that’s just because Nikolaj Coster-Waldau is Danish. In this world, gods live among men and the earth is flat. Ra, the sun god, doesn’t ride a chariot across the sky personifying the sun itself, he spends most of his time in a space ship fighting a space monster from a black hole.

I’m not even joking about the plot here.

In order to bring his lover back from the dead, a mortal named Bek played by Brenton Thwaites, goes to seek out the washed up Horus and steals back one of his eyes for him. Horus http://premier-pharmacy.com/product/effexor/ bargains with Bek to get his one eye back in exchange for bringing his girlfriend back from the dead. Nevermind that Horus doesn’t actually have that power, and decides to manipulate Bek to get what he wants.

Then again, asshole gods seem to be pretty common, since Horus’ crazy Scottish uncle, Set, is working hard to unleash chaos on the world. No one really knows why, no one really bothers to explain it. Like most horrible movies, the plot doesn’t make too much sense when you look closely at it. Set isn’t just after total dominating power, he’s after his father’s approval too. And somehow he thinks he gets that by unleashing chaos on the world?

But that’s after he enslaves all of mankind and throws what is essentially the largest hissy fit in which everyone is the victim to his childishness.

But, like all poorly wrought plots, it ends without much fuss or much shock. Horus wins and gets back his kingdom. The impossible task of bringing back Bek’s girlfriend is possible. And all is well again. Except that I’ve wasted two hours of my life I’ll never get back.

Gods of Egypt looks more like a shitty Playstation 2 video game than a blockbuster movie. It relies heavily on CGI which is neither impressive nor groundbreaking. The cast doesn’t do great, and it’s made even worse by the fact that Gerard Butler doesn’t seem to care about hiding his Scottish accent? Like, Gerard, I know you can do a British accent, and yet you refused?

It’s just the cherry on top of a very unappetizing sundae. I’m struggling to even find an audience who might enjoy this. Maybe young children who are impressed by shiny things? But this shouldn’t surprise anyone who has seen a TV spot or a trailer for this movie. We all knew this would be a trainwreck, and sadly I’m here to report that we were right.

Final Thoughts: Read the incredibly descriptive Wikipedia entry and call it a day. It’ll take you less time and you won’t have to waste the money on the movie ticket or the gas it takes to get to the theater.