NYCC 2014: An Interview with the Cast + Executive Producer of TNT’s The Librarians 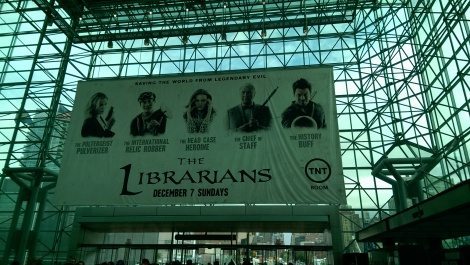 “A group of librarians set off on adventures in an effort to save mysterious, ancient artifacts (IMDB).”

The latest from TNT is a new show airing in December called The Librarians. It is based off of a series of made-for-TV movies starring Noah Wyle, who will reprise his role as Flynn Carson in the new series. It is a story about a magical, mysterious Library and the people who look after it. There are artifacts scattered all over the world that, if they fall into the wrong hands, could be considered dangerous. So, the Librarians go all over to try and collect the artifacts in order to store them safely away within the walls of the Library. I had the privilege of sitting down with the cast and executive producer John Rogers to talk about the show and their characters.

He started the interview out saying he’d love to talk to MARVEL about a role in one of their movies as his next gig and everyone had a good laugh. When asked about the general premise, he explained that the The Librarians picks up after the 3-part made-for-TV movie series but focuses on what could be considered the “next generation” of Librarians. Don’t worry though, even if you haven’t seen the movies you’ll still be able to jump in and understand what’s going on.

Someone asked about how Jake Stone measures up to previous characters Kane has played, such as Elliott in Leverage. He pointed out that Jake Stone’s background is actually more similar to his own personal upbringing. He diverges from previous characters in terms of physical prowess. Apparently Jake Stone, unlike his character in Leverage, doesn’t get nearly as many fight scenes. When he does, he is more of a “bar fighter” than an elegant martial artist and he has struggled with trying to forget all of the things he learned.

Being an Oregonian, I had to ask how he liked filming in Portland. He said he loved it, likes the vibe, and explained that the local talent is great.

Rebecca plays Eve, a counter-terrorist expert in the military who gets a mysterious invitation to the Library. She becomes the Librarian’s guardian (played by Noah Wyle) and said that neither of them are particularly happy about the arrangement. I asked her if her character signed up for the job, or if she’d had no choice, and she admitted her character was pretty much forced into the job. This fact plays into the struggle of her character who she said was pretty much “the skeptic” of the group. She said Eve represents the audience to a degree, because the audience looking in will probably have a difficult time accepting all of the magical things that happen in the Library.

One thing she loves about the role? The fact she gets to be really physical. There are a lot of action sequences for her character and not only does it make her character a badass, but it is enjoyable for the actress as well because it breaks up her day. When asked about what her favorite episode was, she said she loved the Christmas episode and hoped we would love it, too.

You’ll not meet a friendlier guy, and John Kim was a delight to interview. He’s only 21 years old and this is his first major acting gig. The clincher? He’s from Australia, so there’s a lot of new experiences he’s getting being on The Librarians. He did admit that being the youngest member of the cast comes with its challenges, especially since he gets teased quite a lot. However, he was quick to point out that the cast has become like family. The older actors have been amazingly willing to come alongside him and help him to better himself both as a young man and an actor. There’s a great chemistry on the set and it is a great first gig.

When asked about his favorite scene, he said he got to film one with the legendary John Larroquette. The episode it appears in is definitely his favorite because he just got a chance to have fun with it. I had to ask, since he was from out of the country, what he thought of Portland. The first words out of his mouth? “Portland is really weird.” It didn’t surprise anyone, but he said he actually loved filming there. He also has a place in LA and he said after coming to America he feels like all he does is, “Eat tacos and go to Lakers games.”

On his character, he pointed out that Ezekiel is often “too curious for his own good,” lacks certain moral structures, and had a propensity for trouble making.

Perhaps the most interesting thing about Booth’s character, Cassandra Cillian, is the fact she has synesthesia. It is a disorder where, to put it in layman’s terms, the wires in a person’s brain are crossed and their senses get mixed up. She can hear colors, see music, etc. According to Booth, her character has always been on the outside looking in and oftentimes is rejected by those around her because of her disorder. It is something that has grieved her as a character and she always viewed it as something negative. However, when her character gets pulled into the Library it is liberating because for once her disorder is seen as a useful gift.

She said that her character clashes a lot with Eve and they are essentially polar opposites. Cassandra embraces the Library and everything it has to offer, even the magic. On the other hand, as previously discussed, Eve rejects the Library. It causes some tension between the two, but eventually they will all learn to function as a team.

I asked her how they would portray the synethesia on screen, considering it is a very cognitive disorder. She assured me that the audience will get to actually see it and they edit in what her character sees so viewers can join her in her world. Otherwise, it would just be her character making weird gestures and looking absolutely crazy. Booth pointed out that the team has done an amazing job putting together the synethesia sequences and she is excited for us to see them.

Seriously, John Rogers is the nicest human being on earth. He agreed with what Kane said earlier in the interview and assured us that we don’t have to go out and watch the original three Librarian movies in order to understand what is going on in the series. However, there are benefits for viewers if they do watch it and he’s quite certain TNT will probably be showing the movies leading up to the premiere. There’s some back story that will make a lot more sense if viewers watch the movies, but it is not required. They work to make it a show where anyone can tune in within the season and have a general idea of what’s happening.

Since he’d worked with Kane before on Leverage, he was asked about choosing him for the role of Jake Stone. He admitted they pretty much wrote the part for him. Even though they auditioned a few more people, they wanted Kane for the role because it just worked. Another interviewer asked if there were going to be a lot of online behind-the-scenes videos like he did for Leverage and he answered with a resounding yes! There will be a lot of extra content because he enjoys doing it and keeping audiences engaged.

Finally, since he’s one of the executive producers, I asked him why they chose Portland for another show. He said that part of it had to do with the affordability of shooting in Oregon. It just made more sense because they were already established there. However, he also loves Portland because it is a very film-friendly city. They like taking advantage of the talent in the area and it worked out well for this production.

So there you have it. The Librarians sets itself up to be an amazing action drama that will piggy back off of the movies without rely on them. With an amazing cast and a fabulous writer, I have high hopes for TNT’s latest show. It will premiere December 7th on TNT.

One thought on “NYCC 2014: An Interview with the Cast + Executive Producer of TNT’s The Librarians”