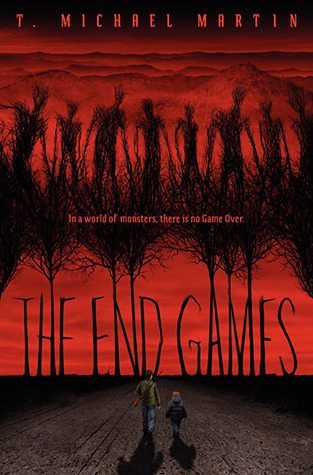 Dare I say it? Zombies are starting to get old. Even for me. And I’m pretty freakin’ hardcore when it comes to my appreciation of zombies. But I liked the premise behind The End Games and I’m a sucker for gamer heroes and sibling bonding stories so I picked up this book with fairly high expectations. While I enjoyed the book for the most part there were certainly a few things that could have been done better. But there were also things that the book does perfectly so it’s all pretty well balanced in the end.

The basic story behind the End Games was what originally drew me to the book. It’s almost like the Walking Dead meets Life is Beautiful. To keep his emotionally unstable younger brother from freaking out at the end of the world Michael creates an alternate world for him. He tells Patrick that everything going on around them is part of  The Game. An avid gamer, Michael has shared gaming with his brother his entire life and he draws from those bonding experiences the only way he can think of to keep Patrick from emotionally collapsing into himself.

Everything they do becomes a mission, every thing they accomplish becomes an achievement. Michael comes up with intricate lies to keep Patrick believing in The Game and the mysterious Game Master. It’s all in pursuit of one goal – get to the Safe Zone. Find Mom. Celebrate.

The problem is that the two boys aren’t the only survivors and Michael finds that when you’ve been lying for so long it can be easy for those lies to be turned against you.

I absolutely loved the main sort of story in this book. The idea of a teenage brother protecting his little brother in this way is fantastic. As an avid gamer, I always joke that when the zombie apocalypse comes we’re going to manage to do pretty well for ourselves as a whole. Michael proves just that. I do kind of wonder why he was playing Halo, Left 4 Dead, and Call of Duty with his five year old brother but hey.

I also loved that his little brother was always on the verge of a break down. I think it add a real life sort of edge of drama and fear to the story. A lot of people have family members who are autistic or otherwise require some manner of special attention. But we don’t think about what happens to them when the world goes to hell. I think this book did a fairly nice job of expressing all of that.

Martin did a great job with his zombies, too. Everyone who does zombies these days really needs to take the effort to reinvent them. I liked Martin’s zombies. Called ‘Bellowers’ they are more or less the stereotypical undead. Except their little quirk is that when someone says something they repeat it instinctively. Which actually makes it remarkably easy to figure out where they are and avoid them. They also tend not to come out at night because their eyes are too sensitive to the light and apparently they don’t close their eyelids any more or something. Of course, like in all video games, there are variations of the classic zombies. And this book is no exception. I won’t spoil it though.

I think the only real criticisms I have are Michael’s internal monologue and the way he portrayed a lot of the citizens of West Virgina as illiterate, religious fanatics. I understand that the writer is trying to channel his inner gamer but some of the choices he makes sort of made me cringe. Half the time I wondered if he was just repeating whatever some teenage gamer cousin might have told him to put in the book. But it didn’t distract for it too much. The little internal interjections just seemed a bit out of place at times. And the whole religious fanatic angle is just so overdone and cliche. I mean, it’s a cliche that works.

Actually, another thing that bothers me – where does the gas for the humvee and the electricity to charge the 3DS come from? Also, why did the author choose to name his main character after himself?

I guess that doesn’t really matter that much.

Over all it’s a pretty decent read and I’m always going to be a sucker for books about gamers. If you’re looking for a quick, easy read full of zombies and brotherly love – and awkward nerdy first love amid the apocalypse – then this is the book for you.

0 thoughts on “The End Games by T. Michael Martin”