We went to Anaheim’s Wondercon this last week and got into some panels to give you guys catch up that you might have missed if you weren’t able to attend. Be on the look out for more information from both me and Sam as the week continues on!

So Hemlock Grove. Ever since the success of House of Cards for Netflix, I’ve been excited for the coming of this Netflix made supernatural tv show. Excited by the cast, with star actors like Famke Janssen, Bill Skarsgard, and BSG’s Aaron Douglas and Kandyse McClure, I was anxious to see what they had to say about the show. The panel had the original novel’s author Brian McGreevy, along with his fellow producer Lee Shipman, and director Eli Roth. Now, I don’t normally put down any people involved in things that I like just because I acknowledge that people have their faults and no one is perfect, but I have to say after his twitter scandal, anything with the Eli Roth name on it leaves a bad taste in my mouth. But, I know his love for gore and excessive, sometimes useless and meaningless, violence, so I expected that Hemlock would be a fun project for him.

The panel notes that the show got its inspiration from cable television shows like The Walking Dead, Boardwalk Empire, and Game of Thrones. In fact, this point was reiterated multiple times during the panel. Having only seen a trailer and a pretty gnarly wolf transformation scene, I can only say that this show reminds me more of ABC’s The Gates than The Walking Dead. Working with Netflix had a lot of benefits. They were able to complete the entire season’s writing before even starting to shoot any of the footage and were therefore able to wrap story lines around each other. In competition with a giant like House of Cards, I’d say they have some pretty big shoes to fill.

With a nerd studded cast that included two BSG veterans, there was a lot of Galactica jokes being dropped by Aaron Douglas. References to cylons and vipers were a plenty, and despite being a die hard Battlestar fan, I did think that it took away a little from a 60 minute panel. Younger cast members, like Bill Skarsgard, Landon Liboiron, Penelope Mitchell, and Freya Tingley got to be a part of Hemlock’s discovery of the “evil within”. 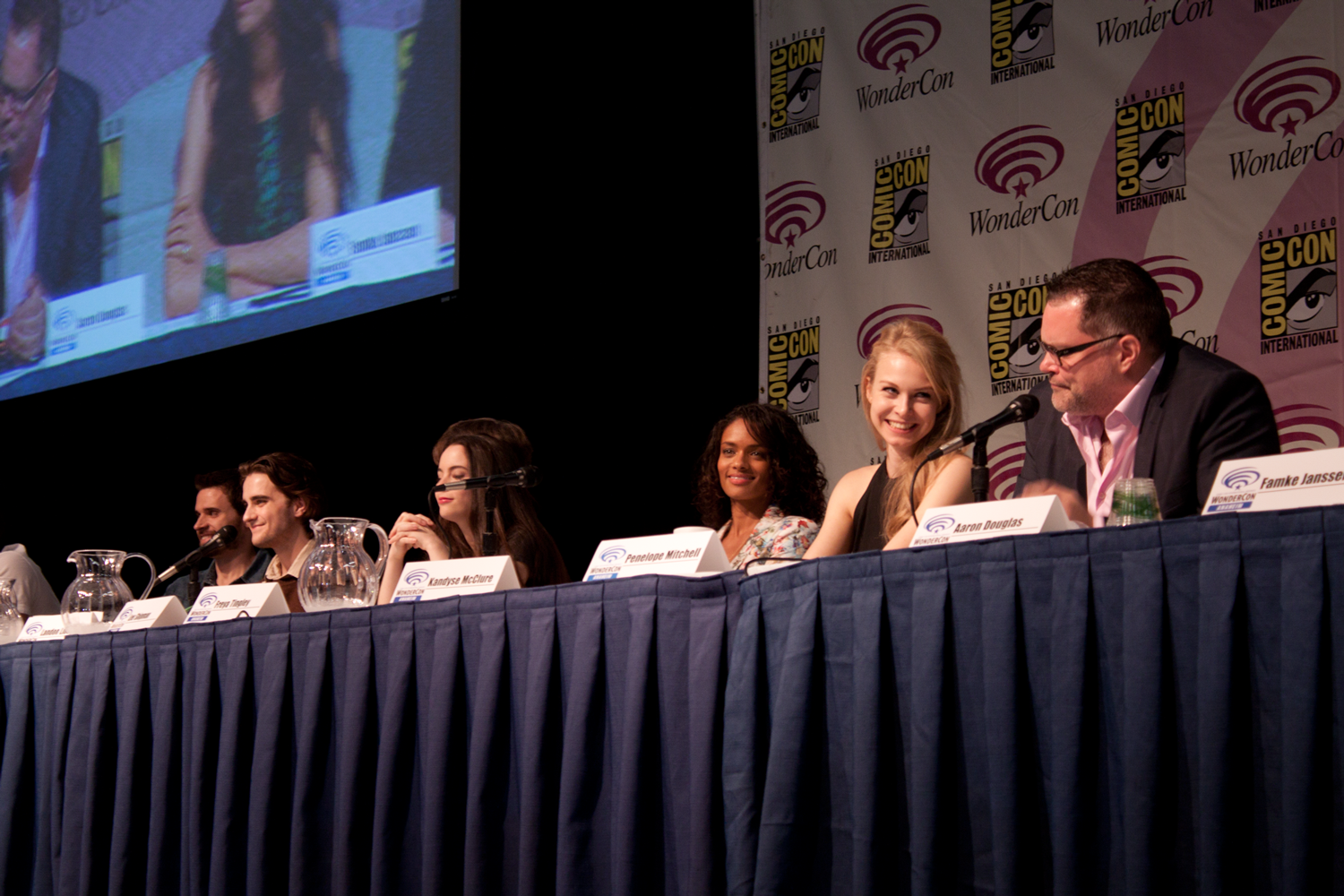 Although the questions seemed mainly to be directed towards the creators and producers, what little information we got from the younger cast members was that we’d be seeing a lot of interaction with Liboiron’s Peter Rumancek, the new gypsy in town. Especially with Skarsgard’s Roman Godfrey. The entire Godfrey family, in fact, gives off a very Borgias or Lannister vibe, sans incest (that I know of). Not that we haven’t seen the family dynamic before, but given it’s direct to series production, I’m excited to see what they did with the story when they have that upper hand.

The panel ended with a great clip of Roth doing what he does best, which is violence and gore. There was a lot of talk about the werewolf transformation and how this would be one apart from the rest, and I have to agree. This isn’t like any werewolf transformation that I’ve ever seen. I could compare it probably closest to the Underworld lycan transformations. Painful, gruesome, and something I would not want to repeat monthly.  The producers were very much attached to the idea of using as little CGI as possible and working with more realistic props, creating a more organic result. In this transformation, the wolf literally explodes from the body in a birth-like moment, after a few minutes of grueling transformation.

The series will be premiering on April 19th, when all thirteen episodes will be up on Netflix for viewers to power through. Despite my apprehension with Roth, I am excited for the series. I love darker supernatural and paranormal shows, so I will be tuned in.