Enter The Forest of Hands and Teeth

With zombies becoming increasingly more popular it’s no surprise that a slew of young adult and new adult titles featuring the formerly human creatures have been hitting the market over the past few years. To be honest, I couldn’t be happier. I love zombies. Always have. Always will. No matter how cheesy or campy or overly bloody the genre may get, I’m going to be a fan. I just am.

So it’s with that sort or mindset that I approached Carrie Ryan’s series. Beginning with the Forest of Hands and Teeth, it explores a world that has struggled to survive after the zombie apocalypse. 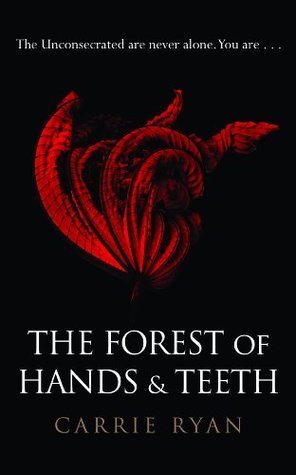 Book One:
The Forest of Hands and Teeth
I felt that this was a particularly good start to the series and arguably one of the best YA zombie books out there. It explores a lot in it’s scant three hundred pages and the plot moved along quickly in bouts of action that at times literally had me cringing, just knowing that something terrible could happen at any moment.

The book follows a girl named Mary who lives in a small, extremely religious post-apocalyptic community tucked away deep in the woods. The village is surrounded by trees and fences. And, of course, the ‘unconsecrated.’ Which, in this world, is the name for the undead. In this community there aren’t a whole lot of options for people and things remain the same for generation after generation. Usefulness is critical. Women marry young and produce children after being claimed by a man in their community. Or they go on to join the secretive, manipulative Sisterhood that runs everything. Mary wants none of it and dreams of the stories her mother told her about the ocean… before her mother walked into a sea of zombies to join her undead husband. She reels against the Sisterhood that tries to claim her and desperately wishes that she could get out of marrying her friend – whose brother she loves. Unfortunately, it’s the only way for her to save herself and remain a part of the community.

You’d think she would be stuck there forever but tragedy strikes. Well, tragedy for the community. Perhaps a relief for her. The unconsecrated overrun the village and Mary, her best friend, her fiance, and her fiancees brother rush into the forest in an effort to escape. In the forest there is a large network of paths protected on every side by large fences. No one in the community really gets to explore them – just the Guardians – but now Mary finally finds herself with a way out.

The story of these survivors making a run for it and trying to survive is compelling. Mary is a very capable young woman despite the misfortunes she’s been dealt in life. Really, the only thing that was a little awkward was the love diamond/square/rhombus that’s going on with these teenagers and young adults as they are basically struggling to survive. One of the things I really like is that Carrie Ryan isn’t afraid to throw in some things that just go for the shock factor. Seriously though. There are a few disturbing things in this book – which you need in zombie books! I’m just saying. Over all, it’s a pretty solid book. 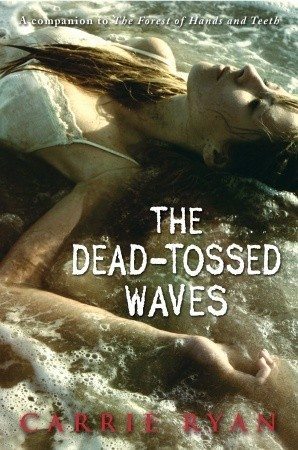 Book Two:
The Dead-Tossed Waves
If you could only read one of the books in this series, I might not suggest it be the first one. I actually liked the Dead-Tossed better, I think, and it works as a stand-alone. You’ll miss out on a few little things by not having read the first one but it’s not entirely necessary that you know before hand because they do eventually explain it.

In this book, we are once again introduced to Mary but she is not our main character or narrator. Instead, she is a secondary character to her daughter Gabry. Mary left the forest at the end of the first book and she had raised her daughter in a very different community than the one she grew up in. They live in a seaside community where Mary serves as the lighthouse keeper and tries to put her years in the forest behind her.

Gabry has a lot of pretty normal teenage girl problems and through her everyday life we learn a lot about the world outside the forest. There are a series of networked communities who all share a common security force and larger government. “Service guarantees citizenship” and there are all kinds of rules and laws restricting peoples’ movement and their actions. Which, in true teenage fashion, Gabry and her friends choose to ignore. One night scaling the walls to go hang out in the ruins of an old seaside amusement park leave some of her friends dead, others sentenced to service without citizenship, herself racked with guilt over not being caught, and Catcher – the boy she’s been in love with forever – bitten and hiding out in the ruins of the town behind the walls. Except by some chance, he happens to be immune. And she’s not the only one to realize it. Elias, from a crazy cultist group that brings their undead along with them, knows. He also knows Gabry and claims to have been searching for her. But for what reason and to what end?

The Dead-Tossed Waves deals with zombies in a much more teenage manner and Gabry is much more the traditional YA heroine. More so than her mother ever was. That might seem to distract from the world Carrie Ryan created but it really serves to amplify it. The bands of survivors live such drastically different lives that sometimes we need drastically different characters. And through Gabry’s innocence and naivety we can explore the other communities and lifestyles. The story does mirror the first in many ways – there’s a kind of awkward love triangle and they wind up running through the same paths and forest walkways that Mary and her friends did in the first book.

But overall the tone and narration actually made me enjoy this book more than the first. It ties in well to the first, though, and you’ll definitely benefit from having read it. Particularly at the conclusion. 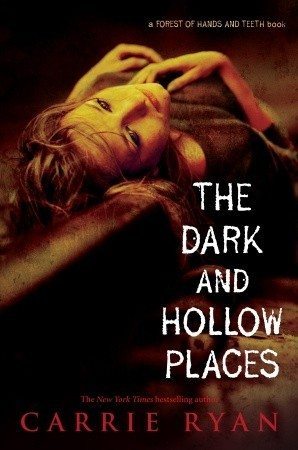 Book Three:
The Dark and Hollow Places
To be honest, this is where the series lost me. Compared to the other two books this one was easily the weakest of the lot. That’s why the fact that it scores better than the other two on GoodReads shocks me. I don’t know why I didn’t like it so much. The plot was fine. The characters were fine. There were some moments of absolute action, terror, and fascination just like the others. Some of the things that happened obviously had to happen so they were predictable. We had to meet these characters, we had to see the city that had been alluded to in the first two books.

If you haven’t read the first two, you might want to avoid this book’s review, actually. Here there be spoilers…

Unlike the Dead-Tossed Waves, the Dark and Hollow Places is a direct sequel to the preceding book. Catcher, Elias, and Gabry go to the Dark City to find Annah – Gabry’s twin sister who Elias had left behin while he went out into the world to search for Gabry. They had left her behind when exploring the forest walkways as children and been unable to find her or return home when they were cut off by the unconsecrated. It should be some grand reunion… but it’s anything but. Not long after they arrive Catcher’s immunity is discovered and the military takes Elias, Gabry, and Annah hostage on a militarized island that serves as their headquarters. They threaten to kill the others if he does not do what they want and run missions for them.

It’s Annah who tells this story and she’s a much different narrator than Mary or Gabry. She’s hardened and in a lot of ways very guilt ridden. She loves Elias (and so does her sister) and when reunited with Gabry she has to wonder if she can ever truly love this new person the way she did that twin sister she abandoned so long ago. Plus she starts to have a thing for Catcher… If there is one thing we can rely on in this series is that there will be a love triangle or square. And that’s a bit distracting. And a little annoying. It comes on really heavy, too, in this book. Not any heavier than in the others but since Annah is such a different character it seems a bit off. I do appreciate her way of thinking, though, and I liked Annah’s response to this dystopian world she lives in.

Honestly, I don’t have much to say about this book. It was certainly interesting to have the dynamic switch to having the humans be the bad guys. The other two books were very much humanity versus the unconsecrated. In this one, though, it’s our band of survivors versus these militia/military types. They are safe from the undead, sure. But at what cost? It’s a nice departure from the other two books and I appreciate that it wasn’t just teenagers running through the woods all over again.

If you give these books a look and find yourself still wanting more from the Forest of Hands and Teeth you can also check out the short novellas Hare Moon and What We Once Feared. Hare Moon features none of our familiar characters but takes place in that same world and What We Once Feared isn’t actually out yet so. I have no idea what it’s about. Your guess is as good as mine.

What you should take away from this series of quick reviews is that Carrie Ryan is a pretty great author and she has created a world that’s much bigger than many others featured in zombie literature in general. It’s not just about individual communities and the like. There are larger things at work and we get to see that through the interconnected, personal stories of the various characters. If you’re interested in reading some zombie fiction that’s very well done and worthwhile read, check it out.

And if anything you have to admit that calling a forest riddled with zombies ‘the forest of hands and teeth’ is kind of awesome and clever. It’s a great title.