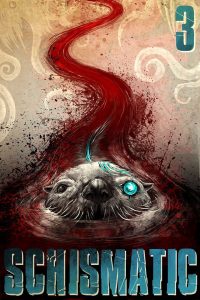 After the second issue of Schismatic, readers were left to wonder just how the mission Idris and Amalia started would end up. With their new band of helpful friends, they made their way into the depths of the Boil where they believed their children were being kept. With the knowledge and skills of the team they put together, the group was able to make their way into the cavernous prison to locate their daughter and, hopefully, their son as well.

Little did they know what would actually be waiting for them when they finally achieved their goal.

Once again, Adams and Briner have gone above and beyond the call of comic book makers to create a vibrant and intense story. With every panel, the reader gets a fuller view of the world they are being drawn into.

I know I have said this before, but I’ll say it again: possibly the most striking thing about this comic series is the intense use of color. Every page is smoothly illustrated to provide bold, flowing images that are visually dense and take a lot of time to consider. Throughout the third issues especially the stark contrasts of cold blues and hot reds went far in setting a good balance in tone between the atrocities Idris and Amalia are forced to commit against the backdrop of a wholesome quest.

Even in the face of monsters and mayhem, Idris and Amalia stand firm in their quest to find their children, and I’ll leave the conclusion up to you to read. With a big reveal at the end of issue three, it is a good thing that issue four is just around the corner, because you’re going to end up wanting more.

For the latest news on Schismatic, check out their Facebook page and keep up with the release of the story.