CatStronauts – They Do What Cats Cannot (Like Go into Outer Space!)

REVIEW COPIES OF CATSRONAUTS: MISSION MOON & CATSTRONAUTS: RACE TO MARS WAS PROVIDED BY THE PUBLISHER IN EXCHANGE FOR A FAIR AND HONEST REVIEW. NERDOPHILES WAS NOT COMPENSATED FOR THIS REVIEW. OUR OPINIONS ARE OURS AND OURS ALONE.

How about cats in space?

Because I love cats and I love space and the idea of cats in space struck me as amazing almost immediately. When we got the opportunity to check out Drew Brockington’s new CatStronauts series I jumped at the chance because, c’mon, cats.

Primarily geared towards younger readers, the series was just as adorable and silly as I had hoped. And while I’m not necessarily within the target age range I still had a lot of fun with these books. The CatStronauts books are full of goodnatured humor and an appreciation for science and technology that we don’t seen nearly enough in kids’ graphic novels.

Catstronauts follows a team of four feline astronauts named Major Meowser, Waffles, Blanket and Pom Pom who work for an organization known as CATSUP. (Let’s just take a moment to appreciate that pun.) Together they travel through space and occasionally save cat-kind from their own cat-made problems.

Each of the cats has their own personality and role to play aboard their shuttle (and vaguely cat-shaped lunar lander). Major Meowser is the sometimes gruff but always dedicated mission commander. Waffles is a shuttle pilot with an obsession with food. Seriously, the books are full of jokes revolving around his appetite – like his rephrasing of ‘prepare for launch’ as ‘prepare for lunch!’ Pom Pom is probably my favorite of the CatStronauts because she’s this awesome female scientist who is way more interested in science than the others cats’ antics.  Though, I admit, I have a really soft spot for Blanket who serves as an engineer (and the creator of the android Cat-Stro-Bot!) because he looks exactly like my cat at home. Probably the best part of these books is their emphasis on science and exploration. It’s a very STEM-positive book and while it’s full of cats in a world with sometimes silly, cat-centric world building it still manages to take the science seriously while still making it fun. Is it entirely realistic? Of course not! But Mission Command sequences feel real procedures take their cue from real-life NASA operations.

So far, there are two books in the series: Mission Moon and the sequel, Race to Mars. 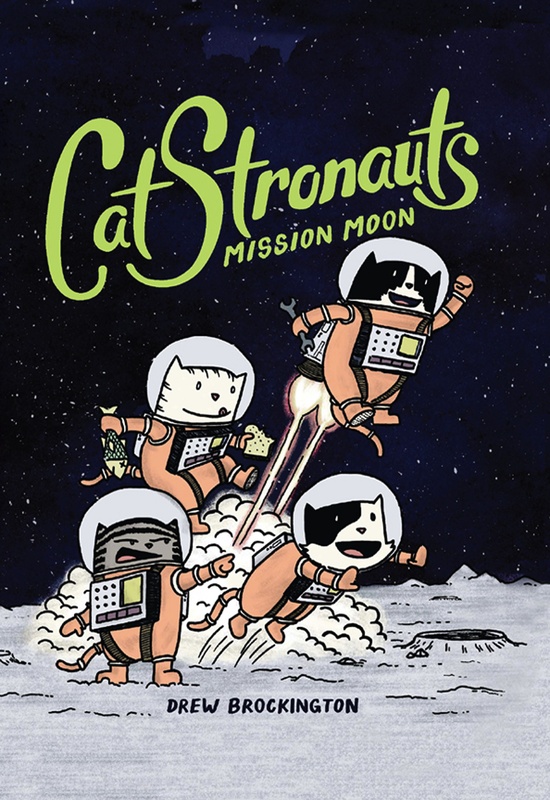 In Mission Moon the Catstronauts come together to solve an energy crisis that’s plaguing the planet. There’s a thinly veiled environmental message here but it’s more silly than preachy. With time counting down until all electricity on Earth fizzles out entirely, the cats take off to build a massive solar power farm on the moon. It’s a great way to introduce kids to the idea of solar power as well as energey conservation.

But the real best lessons come from watching the CatStronauts interacting. They have this super serious mission to complete but even with the fate of the planet on their shoulders they don’t work together the way they should. Blanket and Waffles in particular find themselves distracted for different reasons meaning they end up shirking their responsibilities to an extent. I loved how Pom Pom and Major Meowser respond with very reasonable, relatable reactions of disappointment. Ultimately the team works things out but I love the emotional awareness portrayed in this volume.

Mission Moon is a great introduction to the CatStronauts and by the end you want see what comes next! (Which is why it’s awesome that the first two books come out on the same day.) 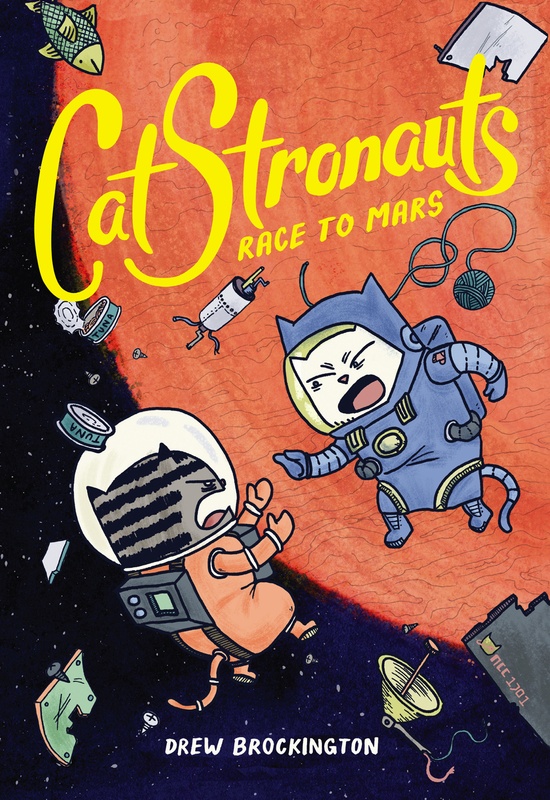 As much as I enjoyed Mission Moon, I can easily say that Race to Mars is my favorite of the CatStronauts books so far. (Granted, there are only two of them so far but still.) Mission Moon was fun but I really enjoy the story in this book a lot better.

In Race to Mars, Drew Brockington basically lampoons the space race between the United States and the USSR but updates it for a more modern era. The Catstronauts find themselves competing against three other groups – the CosmoCats with SOCKs (Russia) and teams from MEOW (reminescient of the European Space Agency) and COOKIE (which is possibly inspired by the (China National Space Administration). Everyone has their own reasons for rushing into space and their own goals with some of them cutting corners better left uncut.

One of the big takeaways from this issue is, again, cooperation but this time between organizations rather than just the CatStronauts themselves. We end up with a lot of very capable cats using some real quick thinking to see everyone successfully to the Martian surface. Something else that’s really cool? The book actually plays out over a very long period of time. It may be a kids’ book but they make it very clear that time is passing as it would if these cats were really traveling to Mars from Earth with the whole book encompassing over 300 days.

But my favorite part of the book was Pom Pom.

At the beginning of the book the rest of the CatStronauts are all basking in the glory of being heroes but Pom Pom just wants to get back to work. She wants to actually go back to space and do experiments. And in the end she puts science above all else and embraces the chance to go to where no cat has gone before. Plus she gets to have some adorable moments geeking out about science with Gemelli of MEOW. I ship them as much as you can ship two cats in a children’s graphic novel.

As I briefly mentioned before, both Mission Moon and Race to Mars come out on the same day which happens to be today – April 17, 2017! I’m really glad they came out at the same time before I think the books read really well together. Mission Moon is a great introduction but Race to Mars truly realizes the series’ potential. And a third book is already scheduled to be released later this year!

I really love these books. They’re super cute and Drew Brockington does a fantastic job not just with the writing but the illustration as well. I love how he brought this world of cats in space to life. It’s a great book for young readers – but older readers who can appreciate a sometimes silly book about cats and space travel are going to enjoy them, too.

You should definitely give these books a read as soon as you get the chance!

Oh, and one last thing before you go – check out this theme song for the series! It’s ridiculous. (And I love it.)